The wind is thick with sawdust on a chilly Saturday morning in Esquimalt, B.C., and spirits are high. Just shy of a dozen volunteers are buzzing around two tall wooden structures — the skeletons of what will become shower stalls for the unhoused.

At the table saw, middle schoolers Abby Henry and Aisha Haq make quick work cutting out support beams. Most of the volunteers, including Haq and Henry, picked up their construction skills on the job while working to build tiny houses for Wet’suwet’en Indigenous land defenders earlier in the year.

“It feels really amazing to help and feel like we’re doing something,” Haq said.

With less than $1,000 worth of wood, sheet metal, waterproof rubber and soon-to-arrive propane water heaters, the community group finished constructing the two shower stalls this weekend.

And the group plans to install further showers in municipal parks around the city without city approval, which will likely be illegal.

Over the last year, the pandemic has created new barriers for those in need of public hygiene facilities. Few options for a hot shower remain open, and those that do are located primarily within the downtown core and face limitations due to COVID-19.

The showers could help those who are unwilling or unable to stray far from where they live in various encampments.

But members of the community group, as well as support workers, are worried that bylaw officers and the City of Victoria may take issue with the showers — particularly with regards to fire safety and drainage — after they are installed, which could lead to their removal.

“Our worry is that we will have put money, time and resources into something, and they take it away,” said Bilal Bagha, an organizer of the build. He’s also concerned about the potential for camps to be moved elsewhere, leaving the showers inaccessible to the community they were built to serve.

Craig Turney, a carpenter who planned and oversaw construction of the showers, said the organizers considered the potential impermanence of the stalls when designing them, which cost about $400 each to build.

These shower stalls are a first step while the group works towards funding a more long-term solution, he said.

A sustainable mobile shower unit is the ultimate goal. The group is looking for an organization already working with the unhoused community that could operate it after it is built.

Attempts by the municipal government to open showers at Royal Athletic Park have recently stalled, as the city has been unable to find an agency to operate the facilities.

In response to the shower stalls project, city councillor Jeremy Loveday said he could not condone unapproved infrastructure on city property. But he said he understands the larger community need.

“There has been a failure to provide basic services to some of our most vulnerable residents, and that includes the provision of showers and other hygiene services,” said Loveday. “I hope that the organizers get in touch with the city as soon as possible, to ensure that they’re installed in a way that is sustainable.”

Since the pandemic has halted access to community centres that many unhoused Victorians relied on for showers, few accessible options remain. Our Place offers fully disinfected showers (along with towels and soap); Anawim House’s showers are open only for adults.

Both of these resources are about two kilometres from Beacon Hill Park, one of the largest of the main 10 encampments in Victoria. The camps typically range from two to over 100 tents, according to Janine Theobald, inclusion and collaboration manager at the Greater Victoria Coalition to End Homelessness.

She estimates that there are currently 250 unhoused people in Victoria and is careful to note that there are often more structures than individuals living in camps.

“There’s people that aren’t able to go to where the showers are, whether that’s because they’re living with disabilities, challenges with mobility, or concerns about leaving their encampment for too long because they don’t want it to disappear,” said Theobald.

“It’s more than quality of life — it’s a basic human need,” she added.

Over the last few weeks, one member of the unhoused community, who requested anonymity, has frequented the shower facilities at Our Place. He, like several others reached by The Tyee, was not aware of other available shower facilities in Victoria but spoke of their potential value.

This build, Turney said, was undertaken over the last two weeks in response to an overwhelming need for showers expressed by the unhoused community in Beacon Hill Park (known as “Meegan” in the Lekwungen language) in consultations co-ordinated by matriarch Rose Henry, a local activist and member of Tla’amin Nation.

With that in mind, they set about fundraising and were quickly able to raise $3,000 from a clothing sale.

Previously, Bagha and others involved in the shower project have been active building tiny houses for Wet’suwet’en Indigenous land defenders and organized their most recent build this summer. While not a formal group, many of the individuals return build after build with a common intent — Bagha says Henry and Haq walked two hours to participate in the first day of the shower build.

“We’re Indigenous-led, with all sorts of folks from different backgrounds,” said Bagha. “Our goal is to make things accessible and open for people who are traditionally excluded from building.”

Once the showers are installed, Grant McKenzie, director of communications at Our Place, recommends they be staffed by outreach workers who can clean the facilities for COVID-19 and monitor in the event of an overdose, similar to measures taken at Our Place.

“You can’t really have them unsupervised,” said McKenzie. “It’s not really about policing it; it’s about safety.”

Bagha, who is currently completing his family medicine residency at the Victoria Cool Aid Society, says he has experience developing COVID-19 safety protocols. While a plan for maintaining the showers is yet to be determined, he is eager to get them ready for use. 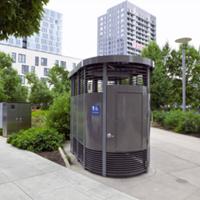 Real Cities Give Their People Places to Pee

“Part of this will also be learning what works and what doesn’t work,” he said.

Once the propane water heaters arrive this week, the team will install the shower stalls, starting in Beacon Hill Park. Even if they are taken away, Bagha is hopeful other groups will be inspired to join in their efforts to provide accessible showers.

The group intends to keep fundraising and working to establish the mobile shower unit.

“We don’t necessarily think our plan is the best plan; we’re just happy for people to get showers in a way that meets their needs,” he said. “It’s been a need in the community for a long time, and it hasn’t been addressed.”