Fourteen years after his head-on crash, Aaron Young still can’t figure out why he thanked the nurses who rubbed broken glass into his wounds with a rag.

His sister looked on crying as two staff at University Hospital of Northern British Columbia said they were removing the shards of windshield that had embedded themselves into Young’s face and neck and suggested that he had been driving drunk. The cloth and broken glass shredded his already bleeding skin.

Young, a member of the Takla First Nation, felt as though he was being racially profiled and had immediately asked for a blood test to prove his sobriety. He had had just a few drinks the previous night, stopping early to sleep and ensure he was sober when he began driving.

His vehicle, filled with family members, had crashed with a logging truck on the way home from a celebration of life in Fort St. James. The truck’s headlights had seemed to come out of nowhere on a sharp curve in the early hours of the morning.

Less than a day later, Young tore off his neck brace and left the hospital with an injured neck, two sprained legs and a carotid artery bleed, cradling his head with his good hand. It was a 20-block walk home but staying at the hospital wasn’t an option.

“I felt alone and let down by people whose professional responsibilities were to treat me and my injuries regardless of anything,” said Young, now 42, from his home in Prince George.

“Racism is alive and well in the university hospital.”

The walk home was long and cold, and pain vibrated through his body with every step. When he eventually made it, he stayed in bed for three months to recover, the hike having worsened his injuries.

Young’s isolating experience is just one example of widespread anti-Indigenous racism in health care in northern B.C. that has the Carrier Sekani Tribal Council calling for a federal task force to investigate and act on the issue.

“We know racism exists already. We know this because our members are facing this right now,” said elected tribal council Chief Mina Holmes, a member of the Lhts'umusyoo (Beaver) clan of the Tl'azt'en Nation. “A task force should be assembled to take immediate action, because every Indigenous person is facing racism right now.”

B.C.’s current investigation into anti-Indigenous racism in the provincial health-care system, spurred by reports of emergency room staff playing a “game” that involved guessing the blood alcohol levels of Indigenous patients, has heard from more than 2,800 Indigenous people on experiences spanning decades.

Investigation spokesperson Jeff Rud said a number of the reported incidents are the subject of further review but would not confirm how many.

Lead investigator Mary Ellen Turpel-Lafond is expected to report before the end of the year on her findings and make recommendations that Health Minister Adrian Dix has said would be implemented.

There is a long history of racism in health care in the north, said Holmes, who leads the tribal council that represents eight First Nations, including the Takla Nation, and services many more. That includes forced sterilization of people held in residential schools, which has been the subject of recent lawsuits.

“This is a systemic issue that has deep roots in northern B.C,” she said.

Holmes said she is happy there is a provincial investigation, but the council has called on the federal government to create “an Indigenous-led task force that will mobilize northern B.C. hospitals to address inequities in care for Indigenous people, including our member nations.”

“Indigenous people shouldn’t have to face this ongoing racism in the pursuit of their right to a health-care system that supports them and provides services to them while the investigation is still going on,” she said.

“We need to build an action plan, and I feel we have a part to play in that.”

Holmes sent a letter last week to federal Minister of Crown-Indigenous Relations and Northern Affairs Carolyn Bennett, urging her to establish a community-driven task force in the wake of the death of Joyce Echaquan in a hospital in Joliette, Que.

Holmes said a task force created by Indigenous Health Practitioners, a group based in Hamilton, Ont., to improve health care for Indigenous people in that region is an example of what’s needed in B.C.’s north.

She said a federal mandate would bring with it much-needed resources and support.

The Tyee has reached out to Bennett’s office for comment but did not hear back by publication time.

Echaquan, a 37-year-old Atikamekw woman, broadcast some of the final moments of her life on Facebook live, where she is seen screaming in distress while hospital staff abuse her and said things like she is “only good for sex.”

What Indigenous people face in northern B.C. is “not far off from what we see in that video from Quebec, Joyce’s video,” said Holmes. “I think that video made myself and others realize that these appalling situations happen because they feel they can treat our people like this.”

“They can, they have, and they will, until there’s an absolute stop to this type of behaviour.”

Holmes posted the open letter on the tribal council’s Facebook page, and within hours comments from community members sharing their own experiences and urging action were flooding in.

Young was among the dozens in the online chorus supporting Holmes’ call, and says that night in 2006 walking home in the cold has caused irreparable damage to any trust he had in the health-care system.

“For me, that feeling and trust in the medical system just didn’t exist, and nothing had transpired since where I felt confident in it,” he said.

Now a heavy equipment operator in forestry and a commercial helicopter pilot, he rarely goes to the doctor aside from medical exams for work and has avoided the dentist for four years, which led to a recent urgent root canal procedure.

And even when he has been forced to seek urgent care in the years since, he says his treatment was just as abysmal.

Days before Christmas in 2016, he said he was mugged by several men walking home from a holiday party and broke his ankle running away, hopping over a high fence next to his apartment building to what he thought would be a soft landing in a snowbank.

The father of three’s ankle was shattered on slick, solid ice below, and he crawled to the road to signal for help and an ambulance.

But he suspects that hospital staff sent him home the same night with no pain medication, construing the fact he had had a few drinks that evening as an indication he was seeking drugs.

Young spent Christmas in bed and alone that year in incredible pain after slipping onto his injured leg while getting home from the hospital on crutches.

His biggest fear now is that he won’t know until too late if something is seriously wrong with his health, a fear that Holmes says is common and most acute for older Indigenous people in northern B.C.

“What if I have cancer and I just don’t go in until it’s much later?” Young said.

The uncle Young grew up with died of cancer and, as a youth, Young heard staff using racial slurs and stereotypes about the man on his deathbed.

Rud said the provincial investigation’s report will be looking at a large amount of data to assess how experiences of racism impact health outcomes for Indigenous peoples in B.C., particularly for chronic and long-term health issues.

“We have a lot of input and now we’re in the writing and the analyzing process,” said Rud. “A lot of this data has not been looked at in this context before.”

While the investigation focuses on documenting the nature of racism in B.C. health care, Holmes wants the task force to focus on how racism affects people in the long term. 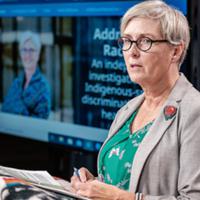 “When you experience trauma or you are the one who is experiencing racism, there is often a lot of shame associated with that,” she said. “We need to get to a place of healing past those experiences.”

This work can be done through anti-racist education of health-care workers, which Young also supports. Holmes said this approach eases the burden on Indigenous health workers trying to change massive institutions themselves.

“We also need to have more efforts to have Indigenous-run and led structures, processes and services in place,” said Holmes. “That takes money, that takes commitment, that’s where we need the federal government.”

Young is heartened to hear that there could now be two independent groups looking at experiences like his and their repercussions across communities.

He still grins through the residual pain caused by the hardware in his once-broken leg as well as carpal tunnel from his demanding career, just “taking one step at a time.”

And Young’s sense of calm as he speaks feels like a product of his training as a Muay Thai fighter and biathlete in his young years.

Connection to the land, tradition and family have been paramount in Young’s own healing, and Holmes hopes a task force rooted in Indigenous teaching and ceremony could support this process for the countless others whose lives and families have been harmed by the intergenerational and systemic racism they’ve experienced in health care.

Peace and healing are within reach, Young said, when he is on the reserve at Takla Landing where he grew up fishing and trapping with his grandmother. 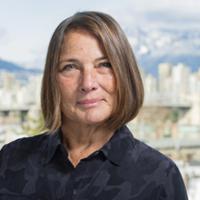 Last month, he shot a black bear while exercising his hunting rights not far from Prince George, and the feeling of giving the butchered meat — two hams, pepperoni, hamburger meat and sausages — to family was overwhelming.

“Peace for me looks like being able to positively contribute to my family, myself and the industry that I work in, and being traditional and effective in some way, shape or form,” said Young.

Having just fought with his younger brother, he took a relative’s words to heart and considered the bear a reincarnation of a member of his family, in that moment forgiving his sibling.

It was an emotional process filled with ceremony, sacred tobacco and tears. “It was just such a powerful moment. I remember feeling so sorry.”

Young thinks of the bear, grinning with a mouthful of grass on that sunny September day, and the strength it showed “fighting to continue” for just a few more moments.

He laughs a short bark when asked if he sees a parallel with his own strength.