Reports that health-care staff in B.C.’s emergency rooms played racist “games” based on guessing Indigenous patients’ blood alcohol levels have drawn renewed attention to structural racism and the harms of stigma in the province’s health-care system.

When the reports surfaced, the BC Association of Aboriginal Friendship Centres and the Métis Nation BC called for a public inquiry into Indigenous-specific racism in health in B.C. and said that all health-care providers should be required to take Indigenous-focused training.

But until Indigenous and racialized people no longer face issues like poverty, inadequate housing and lower education and employment opportunities — the social determinants of health — and access to care is equitable, experts say anti-bias and anti-racism training is like putting a Band-Aid on a broken leg.

“Health inequity is really about the fact that the burden that our communities experience of health issues is a result of inequities in the social determinants of health,” said Charlotte Loppie, an expert in Indigenous health at the University of Victoria School of Public Health and Social Policy. “Those conditions either create health problems or they act as a barrier for people to access support for the treatment or prevention of further illness.”

Structural determinants of health like housing, income, access to clean water, nutritious food and freedom from air pollution are distributed based on highly-racialized lines in Canada, with Indigenous peoples having far less access to them than non-Indigenous Canadians due to the harmful effects of colonization, residential schools and the Indian Act.

“A lot of what emergency units are providing is actually making up for deficits in our wider social safety net,” said Colleen Varcoe, an expert in Indigenous health and inequity at the University of British Columbia School of Nursing.

For example, someone in a mental health crisis might be taken to an emergency room by their loved ones because no primary mental health care is available to them. “So there’s a big mismatch between what emergency staff are trained to do and what their top priority is, and what [patients] actually come for,” said Varcoe, noting most ERs are set-up to treat major traumas and injuries.

The reports of racism in B.C. emergency departments shine a light on a number of realities that contribute to Indigenous people being stigmatized and receiving poor health care.

Fear of stigma and racism often drives Indigenous and racialized patients to avoid seeking care until a condition is much worse, leading them to an emergency department.

“They may avoid care, may delay care until they’re much, much sicker, and it’s because of the systemic distrust that they may be dismissed or not treated well in health care,” said Bernie Pauly, an expert in healthy inequities at the Canadian Centre for Substance Use Research at the University of Victoria.

But emergency rooms are ill-equipped to deal with chronic conditions or create cultural safety for patients within the span of one-time interactions, increasing harm and damaging the care patients receive.

Patients who present with chronic illness, the majority of emergency visits, are judged as less deserving of care simply because their condition doesn’t have an immediate fix.

But Varcoe said the problem is greater for some patients.

“If they look like they are homeless or they are maybe intoxicated or they appear to be of a particular ethnicity that is associated with certain stereotypes, then we have a social judgment on top of that.”

Informal triaging criteria also means biases based on harmful and false stereotypes thrive in emergency rooms, where decisions have to be made quickly about who gets care and who might not.

“These dynamics all conspire to really create a perfect storm for the enactment of discrimination and racism,” said Varcoe.

And those experiences of racism create distrust and have real effects on patient care and health outcomes.

For example, even though Indigenous people in B.C. and across Canada drink alcohol at significantly lower levels than non-Indigenous Canadians, being asked how much one has had to drink is a common experience for Indigenous patients seeking care.

The racist assumption behind the question immediately undermines the trust between patient and care provider, diminishing the patient’s perceived quality of care and the likelihood they will return for subsequent treatment.

The assumption might also lead to a misdiagnosis if substance use is assumed to be the cause of the issues while other symptoms go overlooked.

“Building trust with people is just so important, as important or more than actual treatment,” said Loppie.

And the foundation of this trust has to be an understanding of how an individual got there, not just that day but throughout their lives.

“We have this individualistic approach to health care, where people are generally blamed for their ‘lifestyle,’ for lack of taking care of themselves,” said Varcoe. “We don’t look at the context, the structural determinants of inequity that shape people’s health and well-being and their social circumstances.”

Loppie said the health-care system is built on false assumptions.

“Most people imagine that Indigenous people have complete control over whether or not they get sick, and whether or not they can access good care and treatment when they become ill. And that’s not the truth.” Loppie, Varcoe and Pauly agree health-care providers need to be aware of these realities and be responsible for creating cultural safety in their care, but an education-only approach ignores the systemic issues.

“You can educate, but that doesn’t necessarily change peoples’ perspectives or biases,” said Varcoe.

Meaningful changes in hospitals might instead look like signage and interpretation in multiple Indigenous languages to welcome patients, rather than signs warning that violence won’t be tolerated, which “create a very adversarial relationship to care.”

Patient advocates and community advisory committees may also help ensure patients their own care and practices are tailored to the communities they serve. 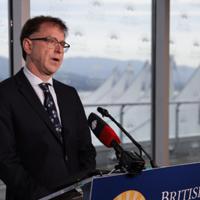 Loppie says self-determination for Indigenous communities will be the long-term solution to health equity, ensuring they have “control over communities, over organizations and over resources.”

Loppie said she does not want the reported racist actions by individual health-care providers to obscure the larger systemic issues and assumptions that make their actions far from a “game.”

“Every system, every policy, the ideologies are steeped in racism,” said Loppie. “And so without consequences and systemic change, people will continue to behave that way.”