The B.C. College of Physicians and Surgeons appears to have reversed its position that effectively barred psychiatrists from using ketamine to treat severe mood disorders like depression and PTSD.

The apparent about-face comes days after a Tyee story about doctors who felt they had to choose between keeping their medical licences or helping patients by using a cheap and effective drug that dramatically aids in therapy.

Some maintained that ketamine, an anesthetic that in smaller doses acts as a psychedelic, helped them save the lives of their patients.

The college, which regulates all doctors in the province, developed a position without the input of the province’s psychiatrists and therapists that ketamine must only be administered by anesthetists.

The college also decreed the drug could only be given in an “accredited non-hospital medical/surgical facility.”

The edict caught some doctors by surprise, and effectively prohibited any psychiatrist working out of a small clinic or home office from continuing to use a drug that has been part of their treatment options for years.

The Tyee story also highlighted the apparent contradiction between the college’s sudden restriction on using cheap and unpatented ketamine with the approval of Spravato, a newly-patented derivative of the drug.

A single dose of generic ketamine can cost around $30. Spravato, which is intended to be taken over months in conjunction with traditional antidepressants, can potentially cost patients and insurance plans thousands of dollars.

On Thursday, without referring to The Tyee story, the college published an announcement on its website about Spravato, rehashing information that was in the public domain even before the drug was approved in Canada in July. The college also sent the announcement by email to doctors in the province.

However, buried at the very bottom of the document the college appears to back away from its ban on non-anesthetists using ketamine.

“The college does not explicitly prohibit the off-label uses of medications,” the release says. “However, it is expected that patients be fully informed of the risks, benefits (and unknown nature of risks and benefits) of any off-label treatments.”

The only restriction spelled out by the college in the announcement is that ketamine by injection or IV for the treatment of depression must still be delivered in a hospital-type setting, presumably by anesthetists. 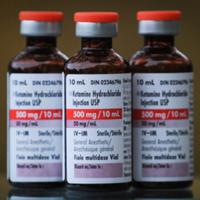 Cutting Off a Lifeline for People with PTSD and Depression

“Parenteral administration of ketamine, including subcutaneous, intramuscular and intravenous as an off-label use of ketamine for depression, continue to only be permitted in accredited non-hospital facilities.”

Dr. Neil Hanon, a Kelowna psychiatrist and clinical assistant professor at the University of British Columbia, reads it as good news.

“What it means is that in B.C. we can use ketamine off-label in a regular office setting as long as it is oral, sublingual or intranasal.”

The college’s retreat from a position that was seen by some doctors as unhelpful and potentially harmful for people suffering from treatment-resistant depression and PTSD brings the B.C. medical regulator into line with the rules set by the College of Physicians and Surgeons in Ontario.

The B.C. college could not be reached for comment about the statement by publication time.