A first-of-its-kind study has found more than half of total faculty positions at publicly funded Canadian universities in 2016/17 were contract jobs.

Previous studies of contract faculty in Canada, including some attempts by Statistics Canada to gather national data through its Labour Force Survey, relied on insufficient or questionable data or were qualitative, said report co-author Chandra Pasma.

“We wanted to start filling that gap,” said Pasma, who is CUPE’s senior research officer.

The researchers sent Freedom of Information requests to 78 of the 81 publicly funded Canadian universities. The researchers excluded military academies and Saint Paul’s University of Ottawa, because it is not included on a list of Ontario institutions subject to Freedom of Information requests, and First Nations University of Canada, which Pasma said she did not think was subject to their province’s FOI laws. (The Tyee contacted First Nations University of Canada to verify whether it’s subject to Saskatchewan’s FOI laws, but did not hear back by publication time.)

The researchers asked the universities to disclose how many full-time tenure and tenure-track and full- and part-time contract positions they had in 2016/17, in which academic departments they worked, and how that number has changed within departments and subject areas from 2006/07 to 2016/17.

Despite contract faculty’s complaints about lower pay and few to no benefits, the researchers didn’t inquire about salary and benefits to keep the research focus narrow, Pasma said.

They examined public institutions because they are covered by provincial freedom of information laws and excluded colleges to narrow the scope of their research, she added.

“It was a big enough project with 78 institutions, I didn’t need to made it any bigger at the start,” Pasma said.

Using responses from 67 universities that returned usable answers to the FOI requests, the results showed:

However, in a response to The Tyee for a request for comment, SFU questioned the validity of the data used for the study. In an email, a university spokesperson said the data provided through the FOI request may not have included some tenure-track faculty, while including some staff positions that may not be faculty. The spokesperson added the issue was a methodological one on the part of the study.

On Friday, Nov. 2 the university released its own numbers: 28 per cent of faculty are on contract at Simon Fraser. It’s not yet clear how the university reached that number, and SFU and the Canadian Centre for Policy Alternatives are currently trying to figure out why their numbers diverge.

No other universities have come forward to challenge the report’s numbers, and the Freedom of Information request questions that the policy group sent to the 78 universities are included in the report.

But Erika Shaker, director of education and outreach at the Canadian Centre for Policy Alternatives’ national office and co-author of the report, said it doesn’t matter to the report’s conclusions whether SFU has the highest percentage of contract faculty or not.

“This has been really about exposing a systematic trend. I think the focus really needs to be on the prevalence, the fact that we don’t have all the information,” said Shaker, adding the data disagreement bolsters the report’s recommendation that Statistics Canada should be collecting and reporting out data on contract faculty.

“We will be able to provide further comment once we’ve finished the analysis.”*

“It may be a labour relations strategy, in that you not only keep wages and benefits low when people are on contract, but it’s sort of a disciplinary measure,” she said.

“When people have tenure it’s very difficult to let them go. When people are on contract, you don’t even need to fire them, you just don’t renew their contract.” 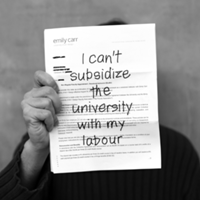 Art Students Are Learning ‘Artists Are Not to Be Valued’

Pasma said the researchers would like higher and more predictable public funding for postsecondaries, along with better labour protection and permanency options for contract faculty. Past qualitative research has shown women and people of colour are more likely to work on contract.

The researchers would also like to see more comprehensive data gathering on contract positions in post-secondary institutions, she said.

“I’d like to see Statistics Canada collect more and much better data, starting with making sure that all full-time and part-time academic workers are included,” Pasma said.

“But I would also like to see them collect data on both appointments and individuals so that we know how many contracts people are getting, what are the characteristics of people who are being hired as contract,” she said.

“In the U.S., they collect all this data already. I gave a presentation at an American conference this summer, and they couldn’t believe that Canada doesn’t collect this data.”

*Story updated Nov. 5 to include new information from Simon Fraser University and a response from the CCPA.