In the federal government’s own guidelines on how to work from home successfully, they promote a home office in a “quiet area with some privacy,” preferably a “space with natural light,” with the help of furniture that suits “ergonomic needs.”

But not everyone is able to have the perfect pandemic home office, let alone work from home.

New data from Statistics Canada shed light on the inequality of home life with COVID-19, and how a virtual job with physical distancing is a luxury.

Here’s a look at the numbers that tell us exactly who it is that’s working from home these days, whose children are doing the most learning at home, and the mental toll of being homebound.

Forty per cent of Canadians have jobs that can be done from home.

This excludes most essential workers, such as those in lower-paid service positions. A June report by Statistics Canada also mentioned that work-from-home jobs are not only flexible, but also stable, meaning that work-from-homers are less likely to lose hours in part or in full.

High-earning couples are more likely to work from home.

Among the top decile of dual-income Canadian families — that is, the richest 10th of couples who both work — 54 per cent of them hold jobs in which both partners can work from home.

However, among the bottom decile of dual-income Canadian families — the poorest 10th of couples who both work — only eight per cent are families where both partners can work from home.

The more money a couple makes, the more likely they are to work from home, leaving more low-earners exposed to COVID-19.

The more education you have, the more likely you can work from home.

Statistics Canada found that the possibility of working from home rises sharply with one’s level of education.

For singles, less than 13 per cent of earners without a high school diploma can work from home.

If earners have a high school diploma, about 24 per cent of them can work from home.

But if earners have a bachelor’s degree or higher, 65 per cent can work from home.

The percentages are similar for couples. Single parents, however, have slightly higher rates of work from home.

Children with educated parents are more likely to do formal learning at home.

In a June survey, parents with one or more university degrees reported more learning done by their children than those with less education.

Eighty per cent of children whose parents have a university degree participated in structured learning three times a week. For children of parents who have high school education or less, 67 per cent of them learned as frequently.

Statistics Canada believes the digital divide might be responsible for less learning in the pandemic by children whose parents have less education. They point to 2018 data that show the percentage of families with children that don’t have internet according to income.

Among the richest quarter of Canadian families with children, almost none of them do not have home internet, less than one-fifth of a per cent.

Among the poorest quarter, 4.2 per cent of them do not have home internet.

Richer families are also more likely to have more than one device with internet access per person. 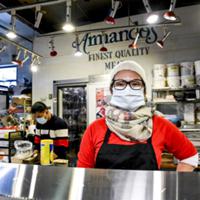 Working in a Pandemic: Stories of Anxiety, Uncertainty, Poverty and Kindness

In a survey done in April and May, 57 per cent of women reported that their mental health is somewhat or much worse during the pandemic. In comparison, only 47 per cent of men did.

Statistics Canada did not collect information on family background but suggests that this may be because the quarantine has exacerbated the gender division of unpaid family work, such as housework and caring for children.

The closure of daycares and schools has increased this, as does physical distancing resulting in less help from friends and family, and the ability to hire external help.

The pandemic has also resulted in an increase in domestic abuse, with couples spending more time together at home.