In the Downtown Eastside, police street checks are a constant part of life.

But Vancouver City Council could take the first step toward ending the controversial practice today.

Mayor Kennedy Stewart introduced a motion calling for council to write to the Vancouver Police Board with the message that “city council’s priority is to end the practice of street checks in Vancouver.”

The motion, to be debated today, comes in the wake of renewed attention on racism and police brutality following the death of George Floyd at the hands of the Minneapolis police.

While Stewart chairs the police board, he says neither he nor council have the power to compel it to make the change. But the board is supposed to consider the direction set by council.

Advocates are warning the motion is just the start of a long process, because the authority to end street checks ultimately rests with the B.C. government.

“It’s great that it’s coming to Vancouver City Council, but of course that’s just the first step, because the jurisdiction for banning street checks is with the Vancouver Police Board,” said Harsha Walia, executive director of the BC Civil Liberties Association.

“And also, importantly, with the province, because we have the different municipal police forces in B.C. as well as the RCMP.”

Street checks involve police stopping someone and questioning them about their activities or asking to see identification. Sometimes the information is entered into a police database.

Police say it’s an important tool, but there have been persistent concerns that the practice is racist and leads to over-policing of marginalized communities.

In 2018, the BC Civil Liberties Association and Union of BC Indian Chiefs launched a complaint with the Office of the Police Complaint Commissioner after an FOI request revealed over-representation of Indigenous and Black people in street checks.

Councillors are unlikely to vote on the motion until next week. More than 80 people have signed up to speak on the motion. (To request to speak to council, visit this page.)

Council is also dealing with a motion from Coun. Jean Swanson proposing to cut Vancouver Police Department funding and direct it to health and social services. That motion has 388 speakers signed up and discussion may start today, if there is time.

Stewart’s motion says street checks have fallen by 91 per cent since new provincial regulations came into effect in January.

But Lama Mugabo says constant street checks are still a daily fact of life in the Downtown Eastside.

“When you talk to people in the Downtown Eastside, this is not true,” Mugabo said, a member of the Hogan’s Alley Society. “People who work at Wish [an organization that supports sex workers] say there are police stops all the time.”

Mugabo said residents have told him the practice has decreased in recent months, but they believe that is only because of the COVID-19 pandemic. 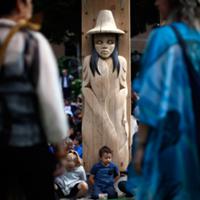 Vancouver Is Failing on ‘City of Reconciliation’ Claim, Says Its Indigenous Committee

“So we have to ask ourselves, who is street checked and who isn’t? Chinese are not street checked. Indo-Canadians are not checked as much. White people are definitely not checked, unless you’re poor or you look poor. It’s racial profiling and it’s ridiculous.”

“Street checks are quite harmful because they become people’s first point of contact with the police,” Walia said.

“If you’re street checked and nothing results of it, in that instance you’re still being recorded in a database... and you’re now known to the police. So the next time something happens, you’re a known person.”

“I know the police board is very much in love with this practice — they don’t want to let it go,” Mugabo said.

“But at the end of the day they’ll have to follow Victoria, Halifax and other municipalities across Canada who have awoke from this nightmare.”