In 1995, Shaun Muc first visited Meares Island near Tofino, B.C., and stood in the presence of giants.

Forests were nothing new to Muc, an avid explorer of coastal temperate rainforests — but this one was different. Shrouded in lichen and dappled sunlight, the island was peppered with some of the biggest life forms on Earth: British Columbia’s big trees.

Muc was star struck and humbled in the presence of trees considered old a thousand years ago, and was launched on a life-long journey of big tree hunting.

Muc isn’t alone in his passion for tracking down B.C. groves where giants grow, just to measure and record the trees. He estimates about 25 enthusiasts actively hunt big trees, with “young bucks” swelling the ranks even as some of the original trackers have passed away.

The group has been compiling their findings in a central database that traces its roots to a tree registry initiated by famed outdoorsman Randy Stoltmann in the 1980s. Muc got involved in hunting in 1995, one year after Stoltmann’s sudden death, which cast the registry’s paper records into disarray.

Many maps and photographs were lost, and other material moved around until finally settling at the University of British Columbia’s faculty of forestry, which digitized the records in 2010 with the BC BigTree Registry. (The registry is temporarily offline, but you can read about it here.)

In the 1990s, Muc hunted for trees using old forestry maps, which rated groves out of 10 depending on their height and size. If the grove scored high — an 8.9 or 9.2, for example — Muc would set out to explore it on foot.

“The young bucks now get by with lidar, which is where you shoot lasers down to the ground [from a drone] and find the tallest trees. It’s literally that easy. I didn’t have Google Maps, I had what were called maps, paper maps,” Muc said.

Originally the registry was used to track the “champion trees,” or the 10 biggest specimens of each species, but the UBC faculty of forestry wanted to create a public database for all big trees. Today anyone can nominate a tree — so long as the species is native to B.C. — and a credited hunter will verify the measurements before adding the information to the database.

Collecting data on these giants is important so scientists can understand the sizes that trees can reach before they disappear, said Sally Aitken, a professor and associate dean at the faculty of forestry who helps run the BigTree Registry.

Aitken is a climate change and conservation scientist and monitors the rate of ancient tree mortality, which she points out has doubled in recent years. The increase in tree deaths is a result of climate change, logging and other factors not yet understood, Aitken said.

What constitutes an “old” or “giant” tree depends on the species, but the registry has still mapped many behemoths, Aitken said. They include a Western red cedar nearly six metres in diameter, a Douglas fir stretching 95 metres high, and a yellow cedar logged at 1,853 years old.

The Sitka spruce in Carmanah Walbran Provincial Park average 80 metres tall, which Aitken’s student analyzed to be the same as “three blue whales put end-to-end.” Big trees dwarf all other life forms and are the largest living organisms other than certain fungi, she added.

And B.C. is logging them. That’s because there is no legislative protection to stop loggers from cutting down these giants. “Nothing is protected, everything is fair game,” Muc said.

The protection of trees depends on which municipality it grows in, and contractors have been known to lose contracts when they cut down trees they weren’t supposed to, explained BigTree Registry chairperson Ira Sutherland.

However, if a tree grows on Crown land there is no legislation that protects it based on its size, height, or age, he added.

That means if a tree is 95 metres tall on Crown land, it would be up to the discretion of the logger to harvest it or not, with no repercussions either way, said Sutherland.

TJ Watt has been hunting big trees for 15 years on Vancouver Island and co-founded the Ancient Forest Alliance in 2010 to campaign for the protection of old growth forests and for more sustainable second-growth logging practices in B.C.

Watt said these forests are vital to help fight climate change because they store two to three times more carbon than is stored by non-old growth trees.

He added they are necessary for the survival of wild salmon and other endangered species and are part of the province’s multi-billion-dollar tourism industry. They are also crucial to the culture of many First Nations communities, Watt said.

B.C.’s old growth forests, which include every tree growing for more than 250 years, cover 3.4 million hectares with 775,000 hectares available for timber harvesting, according to an email from the Ministry of Forests to The Tyee.

“The challenge in the whole big tree hunting effort is the places where the big trees would have once been found have largely already been logged,” Watt said. “We’re really looking at the last remaining fragments of forest to see what giants can be found.”

The old growth forests on B.C.’s southern coast have been 75 per cent logged, including 90 per cent of valley bottoms where the largest trees grow, Watt said.

The government is failing to recognize forests have any value other than the price of lumber, said Sutherland.

“When we put a dollar value sign on timber, we fail to account for all other values, which is a nasty tradeoff, because it takes 300 years for the forest to return,” he said.

In the meantime, the tree hunters continue their work. 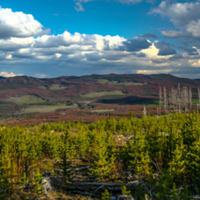 One passionate amateur hunter is visiting all 43 champion trees in B.C. and recording her efforts on her blog Tracking Giants. Amanda Lewis has documented 12 trees so far on her blog, and she isn’t deterred when she tracks a giant only to discover it as a stump, from logging or lightning or otherwise.

“Sometimes I get to a tree and it’s dead or cut down and I’m like, ‘Oh fuck, I’m 18 or 20 years too late,’” she said. “Trees are living entities, and it’s important to remember they are affected by time, people and nature. It reminds me that nothing is forever.”

Muc said he’s found five champion trees in the province, but he hopes those trees won’t retain their celebrity status for long.

“I love seeing my records toppled,” he said with a laugh. “If I lose, everyone wins because it means we’ve found another growing site.”