Former Canadian prime minister Stephen Harper has not been in the public eye all that much since he and his Conservative party were voted out of power in the 2015 federal election. But Harper is now promoting a new book purporting to explain the victory of U.S. President Donald Trump. And in a recent interview with Global News, Harper said it’s not Trump we should worry about — it’s his left-wing opponents.

“I look at Donald Trump,” he said. “Obviously, there’s things that I’m uncomfortable with, but the Bernie Sanders of the world or the Jeremy Corbyns in Britain are the ones that really, really frighten me.” Harper argued that the “anti-market” policies of politicians such as these “would turn us in an irreversible, downturn direction.”

The former Prime Minister’s remarks were brought up several times during a rally this weekend for the left-wing Coalition of Progressive Electors, which is attempting to elect three councillors to Vancouver City Hall in the Oct. 20 election. “This final week is absolutely crucial, you have the chance of making history,” argued Kshama Sawant, a Socialist Alternative council member from Seattle who spoke at the rally. “Stephen Harper is going to be mighty unhappy if you elect these candidates.”

Derrick O’Keefe, who’s campaigning for council alongside Anne Roberts and Jean Swanson, has cited Sanders and Corbyn as inspirations. He said Harper is justified in worrying about the anti-corporate politics that parties like COPE represent. “From [Harper’s] point of view he’s right,” O’Keefe said. “So imagine how scared he’s going to be when he wakes up on Oct. 21 and hears about the Vancouver election.”

The COPE rally was held with less than a week to go until election day. The party’s candidates, who advocate for a four-year rent freeze, free transit for low-income people and a “mansion tax” whose proceeds would help fund social housing, are without a doubt the most left-leaning contenders for Vancouver city council. They see the election as one small front in a global battle between ordinary people and wealthy business owners — and between politicians such as Sanders and Trump.

“We’re seeing the rise of right [wing] populism, people are angry, they’re furious about years of [fiscal] austerity, and the platitudes of smiling liberals telling them everything is alright,” Bill Hopwood, a member of the Canadian chapter of Socialist Alternative, argued. “But there is another voice to answer [that].” He went on, “it’s Bernie Sanders, it’s bold socialist policies... and that’s what this election is about.”

COPE candidates like O’Keefe and Swanson don’t explicitly describe themselves as socialists. But they draw inspiration from Sawant, who was elected to Seattle city council as a member of Socialist Alternative in 2013. Sawant used her position to pass the first $15 minimum wage of any major U.S. city. She’s worked with activist groups across Seattle to pass legislation protecting renters and low-income people. (The Tyee ran a series earlier this year about Sawant and her influence on Vancouver politics).

Swanson, a long-time anti-poverty activist based out of the Downtown Eastside, wants to export Sawant’s style of politics to Vancouver. She sees the election of COPE candidates like herself as a chance to strengthen the influence of left-wing activists on city hall. She gave as an example the recent fight against rent increases. When the BC NDP announced last month rent would go up by 4.5 per cent, COPE worked with the Vancouver Tenants Union and the BCGEU to oppose the hike.

“We mobilized, we supported them, we went to rallies, we knocked on doors, we circulated petitions, we wrote articles, we did interviews and together we pushed the 4.5 per cent increase back to 2.5,” Swanson told the rally, in reference to a B.C. task force recommendation arguing against the higher increase. “It shows what can happen when [grassroots] movements work with people in the political arena.”

Swanson said this strategy could be deployed to reduce the political power and influence of the city’s business community. Earlier this June, BCBusiness magazine seemed to agree. “If anything can put fear into the hearts and minds of Vancouver’s most wealthy,” it wrote in a story about Swanson’s campaign, “this is it.” Swanson took it as a compliment. “I confess that I felt a little shimmer of pride,” she said.

Sawant said the only way to improve the lives of society’s most marginalized — including low-income people, Indigenous communities and people struggling with drug addictions — is to be completely independent of corporate interests. “You are not being antagonistic or not nice by realizing that big business is not on your side,” she argued. “Our elected representatives should wear that as a badge of honour.” 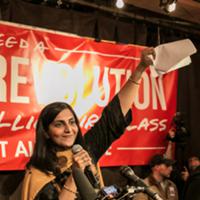 A World Class Divide: Seattle vs. Vancouver on the Housing Crisis

Sawant advised the COPE candidates that getting elected is only the first step in a long and difficult journey. Business owners and their political allies will “fight any small reform tooth and nail,” she said. But she argued that electoral victory for COPE and other left-wing candidates could send a message beyond Vancouver’s borders. “It will be a shot in the arm for working people,” she said. Sawant described the city’s election as a “serious chance to move away from inequality in Vancouver.”

Former prime minister Harper argues left-wing populism threatens our capitalist system. “The Donald Trumps of the world, the Nigel Farages of the world — one can disagree with them, especially a conservative like myself,” he said. “My concern is we will have the left-wing version of that, which will be anti-market, which will be socialist or Marxist economics.” Sawant said this is exactly what she’s advocating.

“I hope that in addition to fighting for radical reforms that we will also begin a movement against capitalism itself,” she said, “and recognize internationally that we need a sustainable planet and a humane society: in other words, a socialist world.” Sawant briefly raised her first in the air, said “solidarity,” and then left the stage. Those in attendance gave her a standing ovation. “Yes we can,” they chanted.