Last weekend, activist and COPE council candidate Jean Swanson and four others were released from the Alouette Correctional Centre for Women for good behaviour after serving half of their seven-day sentence.

Swanson (member of the Order of Canada), Susan Lambert (former B.C. Teachers’ Federation president), Kathleen Flaherty, Heather Martin-McNab and Gyoba Sachiko were arrested after breaking a court injunction at Kinder Morgan’s Burnaby facility on June 30. They were convicted of criminal contempt of court.

Although Swanson is not the first high-profile activist or politician to be detained by police for breaking the injunction while protesting Kinder Morgan, she is the first politician to serve time in jail for the offence.

On March 23, Green Party leader and MP Elizabeth May and Burnaby South NDP MP Kennedy Stewart were arrested for protesting at Kinder Morgan’s Burnaby tank farm. They were released after paying $1,500 and $500 respectively.

The Tyee talked to Swanson this week about going to jail.

Join us and grow independent media in Canada
The Tyee: Why do you think opposition to Kinder Morgan is worth going to jail for?

Swanson: Just look at the sky. We have over 400 fires going around in B.C. All because of global warming. In the meantime, the government is spending billions of dollars on a project that will burn more fossil fuel and increase global warming. That is not right. That money could be used in many other ways. It could be used to end homelessness. To support First Nation’s communities in need of clean water. Those resources could be destined so that workers in Alberta can farm wind and solar energy. Actions that help the environment.

Your case (and that of the other four women) resulted in a criminal contempt of court conviction and jail time. Elizabeth May and Kennedy Stewart were also convicted but received fines instead of jail time. Why do you think that happened?

The judge is giving the sentences that the Crown dictates. They have instructed the judge to increase the sentences as a way to deter the population from actions of civil disobedience. The judge mentioned we were a sinister challenge to the Crown. Six out of the eight people arrested were seniors. So we have decided to call ourselves the “sinister seniors.” We are thinking of doing T-shirts. He kept referring to the Clayoquot protests back in the ‘90s. What he didn’t mention is that those protests were won by the people.

It was humbling. Since we arrived people treated us so nice. There are good people there. Some are very young. They knew what was going on. There was a newspaper with our picture up front. They said, “Thank you. We support you. We appreciate what you are doing.” They let us use their brushes and soap. They even made bracelets for us. It was a humbling experience. They were very kind to us.

How do you think voters in the civic election will respond to a candidate who went to jail (or received a fine)?

Some will love it and some won’t. My Facebook page has hundreds of messages supporting our cause. There are others who don’t like what we are doing. To them I say that we are doing it to save our planet. We cannot be in support of an initiative that increases the burning of fossil fuels, disrespects First Nation’s traditional land and threatens our seas.

How far are you willing to go in your struggle against Kinder Morgan project?

Oh, I am not deterred. I will keep standing against it. I plan to attend another protest in a couple of weeks. I’ll try not to get arrested, at least for two or three months. Then we will see. Let’s stop this pipeline, folks.

Are there other more effective means to reach your goal with respect to Kinder Morgan’s pipeline expansion? 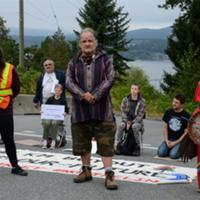 Photo Essay: Getting Arrested at a Kinder Morgan Protest

We have resorted to civil disobedience. We are protesting something that is wrong. Many others are doing it as well. They are also getting arrested. There are many ways to oppose to this pipeline. Some even hang on bridges. That is amazing.

If Kinder Morgan moves forward and increases oil exports and presumably provides royalties for governments, could that money not be used to support and improve the homeless situation in Vancouver?

No. We need to do things well from the beginning. All that money that is going to the pipeline should be spent smart. Spend it where it is really needed. I have been an advocate for homeless people for 40 years. That money can end homelessness. It could help the people of Alberta transit to solar and wind energy. Bring water to communities. We need to use it smart. Protect our planet. Invest wise in solar and wind energy. Unfortunately, some people are too close to the fossil fuel industry.