Dylan Cohen is making dozens of MLAs follow up on an election promise Tuesday to meet with a large gathering of youth as they press for better support when they leave government care.

About 70 youth are travelling from Victoria, Vancouver, Nanaimo, and possibly Prince Rupert for the meeting with the MLAs Tuesday morning. The meeting will be followed by a public rally.

“This is the start of a conversation, and we know that public policy doesn’t happen overnight,” said Cohen, Youth Policy Day organizer with First Call: BC Child and Youth Advocacy Coalition, which is co-hosting the event with the Vancouver Foundation’s Fostering Change initiative.

“But there’s broad public support for change, and it’s up to the [politicians] to listen to youth perspective and needs.”

The meeting is just one promise made by 41 MLAs during last spring’s provincial election when they signed Fostering Change’s Support the 700 pledge to meet, if elected, with youth this fall to talk about improving and increasing supports for youth aging out of care.

The MLAs who signed the pledge come from all three major parties and include Children and Family Development Minister Katrine Conroy of the NDP, former BC Liberal minister-turned-opposition critic Stephanie Cadieux and Green Party Leader Andrew Weaver. Signing included promises to participate in a pre-election debate on aging out of care, to attend one BC Child and Youth In Care Week event, and to advocate for increased funding for youth aging out.

Expanding support is a key goal for the youth. That expansion includes raising the age youth leave care from the current limit of 19 years old; changing the age for all supports available to youth who’ve aged out to 26 from 24; and enabling all youth from care to access those supports.

“Right now, when we factor in expenses and adverse outcomes, we’re looking at increased costs in incarceration, housing, mental health and physical health, and all these issues across the board [for youth from care] that could be better met with comprehensive supports and sustained livelihood,” Cohen said.

Cohen, who wears many hats in his work to change child welfare systems, was recently interviewed by The Tyee in his capacity as a spokesperson for the Children’s Aid Foundation’s Stand Up For Kids fundraising campaign.

Following the meeting, the youth invite MLAs and the public to a 3 p.m. rally outside the legislature. The rally will include “street theatre,” Cohen said, where youth will challenge current youth care policies in a boxing match. 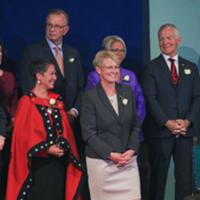 Sarah Kothlow aged out of care when she turned 19. Now 25, she’s travelling to Victoria with youth from the Lower Mainland because she thinks people need to see youth standing up for changes they want.

“My hope for is that all of us being there will contribute to positive change for youth in care currently and in the future,” she said.

Kothlow wants restrictions lifted on the Agreements with Young Adults or AYA program, where youth can receive funding for post-secondary, life skills training or rehab. Currently only youth taken into permanent care are eligible, leaving out youth who went into care voluntarily or temporarily.

Kothlow did get both a student loan and AYA funding, which was “very helpful.” But “other people I’ve spoken to have had trouble getting an AYA.”

Nineteen-year-old Jaymie Clench, a former youth from care who was adopted last year, will also be joining the Lower Mainland youth taking the ferry to Victoria.

“It’s important to me to help spread the voices of other youth that are currently in care, or have had experiences in care, and get people to stand up for youth,” she said.

She wants more acknowledgement of the risks of aging out, such as higher likelihoods of homelessness, poverty and failing school.

Both the Green and NDP election platforms promised expanded supports for youth leaving care. But Cohen says the meeting is about going “beyond political campaigns during an election to create change.”

“Our goals are going to be met by showing people that it’s important through research and evidence, and showing up through public participation,” he said.

While 17,000 British Columbians signed a Fostering Change petition in 2016 to improve supports for youth exiting care, Clench hopes the rally will help increase public awareness beyond those who are already on board.

“To get them to start working towards making life better for youth in care,” she said, adding sympathetic adults who can’t make the rally should consider fostering or adopting youth. Or even just “being there” for them.

Premier John Horgan, who did not sign the Support the 700 pledge, won’t be at the meeting due to a scheduling conflict. But a spokesperson from his office said the premier will attend the rally.

Youth interested in attending can contact First Call or Fostering Change. Those unable to attend in person may be able to participate in the meeting through video chat.

“Our goal is to get youth at meetings with MLAs, and we’re well on our way to making that happen,” Cohen said.