Suncor Energy CEO Steve Williams rocked the oil industry boat last week when he announced a plan to leave some of the company’s oilsands reserves unrecovered during a conference call with investors.

Williams said the company is working to develop a plan with Alberta to “strand” its least economical reserves, a proposal that appears to align with the call of environmentalists to leave the high-cost and high-carbon fossil fuels in the ground to prevent catastrophic global warming.

“We are advocating in a modest way to work with government so that we can strand some of the oil in the oilsands,” Williams said.

“Our regulation is written so that we take to a very high percentage the last piece of oil out. That tends to be the most expensive both economically and environmentally. What we would like to do is leave that last piece in [the ground],” Williams said.

“I’m very optimistic we are making some breakthroughs with government to do that.”

The proposal is about more than leaving some oil deposits undeveloped, according to Simon Dyer, director of the Pembina Institute.

Having a conversation about where, when and how to leave behind the most expensive and highest polluting deposits makes sense within the context of the Alberta climate plan, which caps total oilsands emissions at 100 megatonnes, and last December’s Paris Agreement on climate change, Dyer said.

“We have 166 billion barrels of oil in the oilsands. In 40 years we’ve extracted six per cent of them,” he said. “It’s inconceivable to think we’ll extract all of them even though our regulations are written in a way that we don’t leave a barrel behind.”

Dyer said Williams’ call for a change in those regulations is “the first timid steps towards a ‘leave it in the ground’ conversation.”

Suncor holds approximately 8.7 billion barrels of oil reserves in the oilsands, including open pit mines and in situ operations. Focusing on its most profitable projects could save the company 10 to 20 per cent in operating costs, Williams said.

Keith Stewart, head of Greenpeace Canada’s climate and energy campaign, said Williams surprised many people with his call for a new approach to the oilsands, but it’s unclear how Alberta will manage Suncor’s request.

“It’s important to recognize that what [Williams] really wants to do is ‘high-grade’ his existing reserves, exploit only the cheapest and most profitable parts,” Stewart said.

The Alberta government, which relies on oil royalties, may be reluctant to allow companies to back out of oil extraction agreements, Stewart added.

Extraction agreements are managed under Directive 82, a regulation Alberta might have to alter to accommodate Suncor’s proposal.

Stewart said in an increasingly carbon-constrained world it makes sense for fossil fuel companies to want to back out of their least profitable leases. It’s interesting that Williams chose to adopt the language of environmentalists to justify the change, he added.

“He could have said this in corporate-speak that would be meaningless to most, but instead he used a term that — until recently — was only used by the environmental movement,” Stewart said. “The asset is stranded, or worthless, because the oil has to stay in the ground to avoid dangerous levels of warming and that isn’t something most oil executives want to talk about.”

While high-grading assets isn’t necessarily a bad thing from an environmental perspective, the act of stranding assets needs to be considered in a global context, Stewart said.

“Williams called for a ‘modest’ stranding of assets, whereas climate science tells us we need to strand around 80 per cent of fossil fuel reserves. So we’re still far apart on how much ‘stranding’ is called for,” he said.

“But if you think back to the federal election, it was considered heretical when an NDP candidate suggested some of the oilsands had to be left in the ground so this is an interesting development.”

Alberta’s climate plan placed a hard cap of 100 megatonnes of greenhouse gas emissions on oilsands production — but projects slated to produce 130 megatonnes have already been approved. 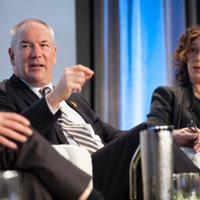 Suncor on Expansion Spree in Down Oilpatch

Dyer, who sits on the Alberta Oil Sands Advisory Group, a coalition of industry, environmental and First Nations leaders, said Alberta faces the difficult task of taking approved projects off the table.

“We’re going to have a competitive process whereby the Alberta regulator decides which projects go forward. They can’t all go forward under the cap so again we’re in a situation where the Alberta Energy Regulator, instead of approving every project, has to decide which of these projects is better for Alberta,” he said.

“If we’re never going to extract all of the bitumen, why don’t you high-grade and take the most profitable stuff that has the least environmental impact?”

Dyer said it’s important for Alberta to recognize a global transition away from fossil fuels is under way.

“You’ve got to consider the Paris Agreement and countries musing about being fossil fuel free by 2050 and the uptake of electric vehicles,” he said.

“It’s a tough point for Albertans but whether we like it or not the world’s changing,” Dyer said. “At the current rate of production it would take us 200 years to get through the oilsands. It’s just inconceivable that will happen.”

If some of Alberta’s bitumen is to be left in the ground, a conversation needs to take place about how that will happen. Dyer said he hopes that conversation will be public and transparent.

“I think if we get policy to move from the idea that you extract everything regardless of the benefit or the cost, and instead you actually make decisions based on optimizing benefits, that can only be a positive thing.”