Finding a place to live in Vancouver is getting harder all the time. Finding a place to stay may never have been easier: the number of rooms, suites and apartments available short-term and online has skyrocketed over the past 18 months. 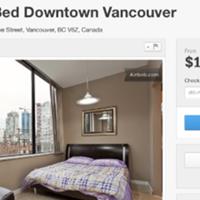 Home-sharing sites like Airbnb, VRBO and Homeaway have made it easier than ever for people to list their homes for short-term rentals. Some have even started doing so professionally, outfitting entire homes for tourists.

The boom in home and apartment "sharing" has many residents concerned to the point that last month Vancouver city council voted unanimously to have staff look into the issue and suggest whether action is needed.

"The biggest negative impact is the likelihood that a significant part of our rental stock is being used for short term rental," Councillor Geoff Meggs said. "The city is committed to creating long term rental, and if it's just going to be good for tourism then we really are concerned about that."

Whether short-term rentals really remove potentially permanent accommodation from the marketplace is hard to say.

Karen Sawatzky has been examining the effect that one leading site, Airbnb, has on Vancouver's housing market, for her MA in urban studies at Simon Fraser University. The number of listings is on the rise, she found: 2,978 in January 2015, and 3,473 five months later.

By December, listing-tracking site InsideAirbnb found 4,728 places available in the city. They ranged from a spare couch to an entire house. But 67 per cent were for complete homes or apartments. The comparable rate for New York City was 52 per cent, and San Francisco, 57 per cent.

Still, Sawatzky said it's hard to quantify what effect short-term rentals have on other accommodation, since so many other factors also affect Vancouver's housing market.

What's clear is that many of those taking advantage of home-sharing sites to earn extra income are also breaking city bylaws. The law says only registered hotels and bed and breakfasts may rent accommodation for periods of less than a month at a time.

But thousands of online listings make the bylaw hard to enforce. "The existence of a listing online, or the statement of a neighbour, is not sufficient to issue a bylaw violation notice," Meggs said. "Investigations are quite complex and require a lot of evidence."

Love and hate for home-sharing

It's an issue causing civic leaders to lose sleep around the world, where reactions have run from a warm embrace, to slamming the door.

Berlin has perhaps gone furthest. It made short-term rentals illegal in 2014, except for those with permission from the city government. After a two-year transition period, the law took effect on May 1.

You can still find listings for entire units in Berlin, but their owners risk fines of up to €100,000. (The city has yet to issue its first.)

California's Santa Monica didn't ban short-term, whole-unit rentals outright. Instead, it made them expensive and unpopular. The city, with a population of about 90,000, still allows renting out a spare bedroom or shared room. But one rule pretty much ended the rental of entire homes or apartments: the host has to be living there while renters occupy the place.

City officials estimated that the rule -- plus an associated 14 per cent tax and requirement for a business licence -- would eliminate 1,400 of the 1,700 listings in Santa Monica at the time of the ordinance.

Other cities have taken a less punitive approach: laying down rules, and bringing in new revenues.

Paris is Airbnb's most popular destination, with 40,000 listings. The City of Light imposed a rental tax of 83 euro cents a night, collected automatically by Airbnb. During the last three months of last year, the tax paid the city an estimated €1.2 million. Paris also limits residents to listing their primary residence, and started aggressively cracking down on violators, fining violators up to €25,000.

Other cities are trying to get home-sharing sites themselves to help enforce the law.

Los Angeles will debate an ordinance this June that would require residents to get a registration number from the city before they rent out their primary residence. The city wants Airbnb to require hosts to provide the number before they sign up, and on any advertisement. The proposed ordinance would also levy a 'transient occupancy' tax, and set a 90-day-per-year limit on how often residents may rent their home.

"These provisions would require platforms to turn over a log of bookings to the local government on a monthly basis," Sawatzky said. "Otherwise there's no way of verifying that info, and therefore [it would be] pointless to include booking limits."

Most booking sites have resisted turning over client data. New York City got four years worth of rental data from Airbnb only after the New York attorney general issued the San Francisco-based company a subpoena.

City supervisors in San Francisco hope to force cooperation by making sites financially liable for illegal listings. The city has had short-term rental legislation since 2014, but Supervisor David Campos claims that as of last month, 75 per cent of Airbnb San Francisco listings violate the law.

Campos has introduced city legislation to fine sites up to $1,000 per day for every illegal listing they host. Airbnb has publicly questioned the legality of the requirement, and it has yet to come to a vote.

But while most cities are fighting to stem, or at least control and perhaps profit from, the rising tide of short-term rentals, others have embraced the home-sharing economy's pitch.

For decades, the Greater London Council Act of 1973 banned short-term rentals without planning permission. Last year, the city changed the law to allow them. The Department for Communities and Local Government even released a document promoting short-term rentals, saying that they "expanded the pool of competitively priced accommodation," and helped support the city's tourism industry.

City staff are examining those and other approaches but, Councillor Meggs said, "We'd never go for a ban in Vancouver. We've always allowed for short term rentals under a bed and breakfast license, and we liberalized that during the Olympics."

Those rules, however, require that landlords demonstrate that they have in place "business licensing, a fire plan, supervision, accountability and consumer protection," Meggs said, adding that "none of that is taken care of" by sharing sites.

"So we have to look to the past and achieve those objectives in the new environment," the councillor said, conceding that "I don't know of any city that has a clear cut solution at this stage."

Meanwhile, it's a great time to visit Vancouver, less so to live here.