A Conservative MP in eastern Ontario has mailed flyers to his constituents accusing the Liberals of planning to use electoral reform to "rig" the next election. 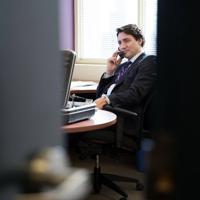 Does Justin Trudeau Want Fair Elections or Not?

"Stop the Liberals from destroying our democracy," read the mailers from Scott Reid, MP for Lanark-Frontenac-Kingston. The flyers, sent to constituents last month, said the Liberals "plan to rig the 2019 election" through electoral reform.

But Reid, who is also the Tory critic for democratic institutions, told The Tyee he stands by the election-rigging accusation.

The Liberals have promised to reform the electoral system and replace the current first-past-the-post model, but haven't announced their preferred alternative.

Under that system, voters rank candidates on their ballots. If no candidate is the first choice of 50 per cent of the voters, then the bottom candidate is dropped. The second choice votes of his or her supporters are then distributed among the remaining candidates. The process, used in Australian national elections, continues until a candidate has 50-per-cent support.

Reid said that in some versions of the system voters must rank candidates or their ballots are considered spoiled. He said he fears that this is the option the Liberals intend to introduce.

People confused by the system could mistakenly spoil their ballots by not filling out alternative candidates after their first choice, he said.

Tory voters would be much more likely to have their ballots tossed out, the Conservative MP said.

"If you produce that system, you've rigged the next election," said Reid. "That is very likely the system that the Liberals are going to set up."

Reid said he's trying to stop a system that would favour the Liberals. He wants a referendum that includes the choice of keeping the status quo.

Critics have argued the Conservatives prefer the status quo because it favours them, but Reid rejects the argument. He said he doesn't prefer the first-past-the-post system, but wouldn't reveal his choice for electoral reform.

Any changes must come with a robust public education campaign, he said.

The flyers were designed in Reid's office and have been offered to other Conservative MPs for use in their ridings.

The Liberals wouldn't comment on the flyers, but Trudeau has rejected any suggestion he intends to use electoral reform to implement a system that allows the Liberal party a better chance at victory.

The Liberals plan to name an all-party committee to investigate reform options.