Prime Minster Justin Trudeau's election pledge (and subsequent confirmation) that Canada will not have another election under first-past-the-post has morphed into a growing controversy. Trudeau's evident attraction to one option for electoral reform -- the so-called preferential ballot, or instant runoff vote (IRV)* -- and his stated opposition to proportional representation has some analysts and commentators smelling a rat. 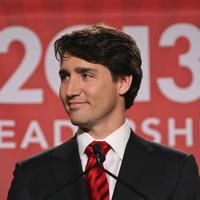 That's because IRV is a system that favours parties who are able to lay claim to the ideological middle ground. That is, with a preferential ballot (where voters' second choices determine the outcome in most ridings) the centrist party can garner second choice votes from both the right and left wing parties -- as the Liberals clearly did in October's vote.

Is the fix in -- is Trudeau's (and more importantly the Liberal brain trust's) sudden love affair with electoral reform just a plan to stay in power permanently? Trudeau, as you would expect, denied any such nefarious motivation.

But more on Trudeau's ambiguous position later. Let's look at the claim behind the suspicions.

Using the same rough formula regarding voters' likely second choices here's what could have happened in the October election:

The Liberals would gain 15 seats from the Cons, seven from the NDP, one from the BQ and lose one to the NDP for a total of 206 (actual count: 184).

The Conservatives would lose 15 to the Liberals and seven to the NDP for a total of 77 (actual count: 99).

The BQ would lose one to the NDP and one to the Libs for a total of eight (10).

The Greens would remain unchanged at one.

Of course this reflects just one election but it is easy to see why the Liberals would love to have IRV in place. In an election where they started off in third place they ended up winning by successfully occupying the middle ground. Of course you have to be smart to do that consistently -- but the NDP and Conservatives would have to be even smarter given that their political bases include large chunks of voters on the left and right respectively.

The agitation for electoral reform amongst civil society groups has been focussed almost exclusively on the fact that people's votes are wasted under first-past-the-post -- that the parliamentary seats awarded often have little relationship to the total number of votes received. Fair Vote Canada points out one glaring example: "In 2008, the Bloc Québécois and the Green Party achieved almost the same number of votes -- but Bloc voters elected 49 MPs and Green Party voters elected zero."

But, while the wasted vote phenomenon is most obvious with small parties like the Greens it can be just as true for the mainline parties. The last two elections were typical -- both the Conservatives and Liberals achieved majorities of 54 per cent of the seats with just 39.5 per cent of the votes. Justin Trudeau's statements and actions on the issue reveal that he knows what the problem is but is loath to do what is necessary to solve it. He told iPolitics: "I've met and heard from far too many Canadians who are frustrated that they don't feel like their votes count."

Following the vote Trudeau's office replied to a letter from the Canadian Electoral Alliance, a group supporting pro-rep, criticizing Trudeau's "no" vote. It stated, in part: "[Mr. Trudeau] does not support proportional representation, as he very deeply believes that every Member of Parliament must represent actual Canadians... not just the political party that appointed them to the House of Commons."

But this is such an obvious red herring that it cannot sustain 18 months of scrutiny -- the timeline for legislation on the issue. Trudeau's stated objection to pro-rep assumes that it involves a system in which voters will not have a local elected representative -- in effect, that MPs will be appointed by the parties. But MMP, the system contained in the 2014 NDP resolution, does retain the riding system so every voter has access to a locally elected MP. The parties provide lists of regional candidates who are also voted for and used to top up the final number of MPs for each party in line with the percentage of votes each received. No MP is just "appointed."

Asking people whether they want IRV or MMP is about the same as asking whether they would prefer a watermelon or a toaster. The two electoral reforms address different issues. IRV seeks to increase the legitimacy of the elected Member of Parliament by ensuring the winner actually receives 50 per cent or more support based on voters' preferences. But MP legitimacy has not been a major cause of concern in Canada.

First, MPs in our multi-party system are not freelancers -- they are tied to parties that express a set of values and policies and supporters expect them to vote for those values and policies. Most of the day-to-day "representation" done by MPs is related to help with filling out forms or addressing unfair treatment at the hands of some government agency. But these minor concerns don't determine how people vote.

The desire for electoral reform is driven not by a passion for better quality representation in the riding -- it is driven by a desire for a genuine, robust democracy where peoples' votes actually count. The evidence in favour of pro-rep is overwhelming. Eighty-five percent of our peer countries in the OECD have some form of proportional representation and as Fair Vote Canada argues they get what we want: "fair results, a representative Parliament, greater voter engagement, more collaboration, more accountability, better representation of diversity and voter choice, and stability."

And if Prime Minister Trudeau genuinely wants more legitimate MPs he can have that along with proportional representation. There is nothing stopping him from including a ranked ballot as a feature of a proportional system. Now he just has to do it and continue to reject calls for a referendum. Sixty-three per cent of electors voted for parties supporting making every vote count -- as strong a mandate for any policy that a government is likely to get.

*A previous version of this column erroneously characterized single transferable vote (STV) as a non-proportional voting system. This has been corrected to instant runoff voting (IRV).