The Internet can be a frightening place to navigate for someone trying to seek out the truth about Canada's ability to bring refugees in from war-ravaged Syria. 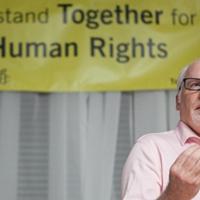 "We can't accept refugees with so many of our own homeless!" some fume on Facebook.

"Refugees collect more than pensioners!" others trill on Twitter.

It seems that social media streams are flooded with such arguments and questionable statistics -- and it's not always easy to know how to respond, as anyone following the story or arguing with a crusty family member at Sunday dinner knows.

But with Canada committed to bringing 25,000 Syrian refugees to the country by late February, such arguments aren't going away anytime soon.

The Tyee decided to round up some of the foremost experts on the Syrian refugee issue and put some of these arguments to them. The following are their responses.

We shouldn't take in refugees because we have our own homeless to worry about.

This is like Sophie's Choice. It is appalling that one might hold up two groups of people, both in need of survival, and say that we can only care for one of them. That we must leave the other group to die.

Canada is one of the wealthiest and most caring countries in the world. If we cannot house both the homeless and the Syrian refugees, no one can, and there is no hope in our world.

Why should Canada take them in when ''other Muslim countries'' will not?

Retort by Terry Glavin, author of Come From the Shadows: The Long and Lonely Struggle For Peace in Afghanistan and other books:

Dumb question: "Why don't Muslim countries take them?'' Correct answer: They do. In fact, the 4,289,782 Syrians registered with the UN High Commissioner for Refugees are languishing almost entirely in Muslim-majority countries. But here's how dumb the question really is: It's premised on the assumption only an imbecile would make, that ''Muslim countries'' are bound by some sort of ecclesiastical first-responder duties that magically do not burden, say, liberal democracies.

It is owing mainly to something called ''geography'' that Syrian refugees have ended up where they are. If you are fleeing Bashar Assad's barrel bombs or the marauding genocidaires of ISIS, and you are fortunate enough to reach a border and to get across it, you will find yourself in Turkey, Lebanon, Jordan or Iraq. Each of these is what is known as a ''Muslim-majority country.'' All but Turkey are primarily Arab countries.

The question commonly appears to refer to the Arab states of the Persian Gulf or Saudi Arabia. But to get that far, a Syrian refugee would have to trek several hundred kilometres across desert and plain and then maybe board a ship as a stowaway somewhere on the Shatt al-Arab waterway, and none of the Gulf States are signatories to the 1951 UN Refugee Convention anyway. So there's that.

I suppose there's always Yemen. A signatory to the Refugee Convention since 1980, Yemen has been crippled by a Saudi-led coalition that has been waging war with Iranian-led putschists there since March. In August, a UN investigation found that ''Yemen after five months looks like Syria after five years." So there's that, too.

They're going to take our jobs and won't contribute to Canada.

Retort by Lily Lim, division manager of career service for the Immigrant Services Society of B.C.:

There's currently a skills shortage problem in the labour market and employers and employer groups will be the first to say this. Many industries are desperate for people and they're just not getting them, which explains the significant response we've been receiving from employers all across B.C. to our survey of employment opportunities for the arriving Syrians.

Studies show that refugees and immigrants contribute positively to the Canadian economy. Many of them start small businesses that employ both themselves and Canadians. They're also contributing to offsetting the effects of our declining birth rate and aging population.

Unlike economic migrants, refugees arrive in Canada in search of protection. Wars and conflicts that cause people to flee their countries do not discriminate between the rich and poor. Many refugees led successful lives before being forced to leave everything behind in search of safety.

They collect more than pensioners!

Retort by Colleen French, communications and networking coordinator for the Canadian Council for Refugees:

No, refugees do not receive more in income assistance than pensioners in Canada.

Rumours that refugees arriving in Canada receive more financial assistance than Canadian pensioners are false. If you receive an email or see any messages with this rumour, share the facts.

Only refugees sponsored by the government to come to Canada receive any direct financial assistance. They may be eligible for monthly assistance for up to one year and only if they do not have their own financial resources or income. The exact monthly rate depends on family size and is tied to provincial social assistance rates. They may also receive a one-time start-up allowance for clothes, basic household items, and staples.

Refugees sponsored by private groups to come to Canada receive no government assistance. They must rely on their sponsors for income support in their first year. Refugee claimants -- asylum seekers who ask for international protection in Canada once they arrive -- do not receive any special resettlement allowance from the government.

They are going to wreck our country they way they wrecked their own.

Retort by Ihsaan Gardee, executive director of the National Council of Canadian Muslims:

The fear that acts of terror like those in Paris, Beirut, Baghdad and elsewhere have generated is understandable.

At the same time Canada is not a country ruled by fear nor should it be. We must remember that the refugees themselves are also victims of this same type of twisted ideology. Canada has a moral responsibility to help and cannot expect other countries to deal with this massive refugee crisis alone.

Of course Canada must take precautions when it comes to the security screening of refugee applicants -- no one is saying otherwise. Elected officials including Prime Minister Justin Trudeau, Public Safety Minister Ralph Goodale, and Immigration, Refugees and Citizenship Minister John McCallum have all reiterated that all refugees must be properly vetted for security concerns prior to entry into Canada.

To blame refugees (from Syria or elsewhere, Muslim or otherwise) for atrocities committed by fringe extremists would be like blaming all Christians for the actions of the Ku Klux Klan, who also cite religious scripture.

While it may be tempting to respond to attacks by blaming an entire group, to do so would be to repeat darker parts of Canada's history like its treatment of Japanese and Germans during World War II. We have, can and must do better.