Squamish Nation chiefs and council have given their thumbs up to Woodfibre LNG, but a ruling on the pipeline necessary to feed the Howe Sound plant with fuel is still pending. 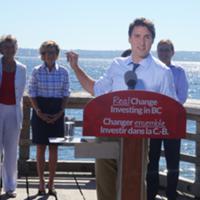 The North Vancouver-headquartered first nation said it has issued an environmental certificate to the proponent of the $1.7-billion facility. Had the project been on reserve land, it would have required a membership vote. Under the provincial Environmental Assessment process, proponents must consult and seek approval from area First Nations.

In August, the Squamish Nation said it would approve the project subject to 13 conditions, including a revenue-sharing agreement, and the company said it would work to meet them. A financial agreement between the two parties is pending. The FortisBC pipeline that would feed the plant is subject to a separate process.

"The whole rationale for our independent assessment was to make sure our Aboriginal rights and title interests are protected," Chief Ian Campbell said in a news release.

Squamish District Council voted last April against supporting the pipeline and plant, unless 18 of its conditions are met.

Eoin Finn of My Sea to Sky said his group is disappointed but respects the Squamish Nation decision, because that is its traditional territory.

"Question marks abound as to what exactly is in the agreement with the Squamish Nation," Finn said. "There are a few provisions that are yet to be enacted, not the least of which is the revenue-sharing model between Woodfibre LNG and the Squamish Nation."

Finn said his group's disappointment stems from the "odd spectacle" of the Squamish Nation "doing the opposite" of a Gitxsan Nation tribe that announced plans to seek an injunction to block a pipeline for the proposed Petronas-owned LNG plant near Prince Rupert.

Finn said the project is opposed by municipal councils on both sides of Howe Sound, and his group recently delivered a 6,000-name petition against Woodfibre LNG to West Vancouver-Sea-to-Sky BC Liberal MLA Jordan Sturdy.