We are now well into the 2015 federal election campaign, and at this point the outcome is far from certain. Much is likely to depend on the voters of British Columbia, and in particular those in the Lower Mainland. 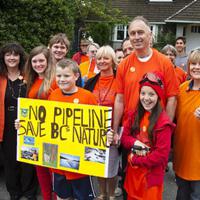 Can a New Dem Win in North Vancouver-Seymour?

Transposed vote results from 2011 show the Tories hold eight B.C. ridings with less than 50 per cent of the vote, and pundits (including Tyee's seat-crunching oracle Will McMartin) have said to expect tough battles in all of them.

Burnaby North-Seymour merits particular scrutiny. A microcosm of the region (if not the whole province), the riding was created in the 2012 federal election redistribution to reflect a population grown too large for an electoral quota of 104,000. Burnaby North-Seymour, at 100,632, is below that number.

Loud protests followed the announcement of the new riding. It includes much of Burnaby-Douglas (now held by NDP MP Kennedy Stewart) and North Vancouver (now held by Conservative MP Andrew Saxton), which have historically voted very differently and seem to have little in common. The Redistribution Commission noted "a distinct lack of enthusiasm on both sides of Burrard Inlet" for the new boundaries, but was unmoved and let them stand.

The Liberals must be hungry for what used to be their federal and provincial turf. (Justin Trudeau himself recently turned up at the Burnaby North-Seymour Liberal headquarters to encourage the party faithful.) The Greens can see Kinder Morgan's pipeline -- which ends on Burnaby's Burrard Inlet shore -- as a conduit to a new seat in Ottawa.

As a result, all four parties are fielding remarkably strong candidates. Tory Mike Little has worked his way up from Reform/Conservative staffer to North Vancouver District councillor. Dr. Lynne Quarmby for the Greens is a renowned scientist.

The Liberals' Terry Beech was a teenage city councillor in Nanaimo before becoming a high-tech startup CEO. And New Democrat Carol Baird Ellan is a retired provincial court chief judge, the first woman to hold the position. This week The Tyee will look at each of these candidates in detail.

Geographically, Burnaby North-Seymour includes industry, rail lines, suburban homes, recreation sites, a watershed and wilderness. Draw a line due north and the next big city you'll hit will be over the North Pole: Samarkand, in central Asia.

Now combined again, Burnaby North-Seymour is in many ways a very different riding. The area has seen an enormous growth in population and property values. An average house in Deep Cove or on Capitol Hill might have sold in the early 1970s for $30,000 ($175,000 in 2015 dollars). Today it would be well above $1 million.

Median income was $29,910 in 2010 according to the 2011 census, yet young families are still buying. Seniors are a growing part of the population -- whether they've held onto their homes or moved into retirement communities.

The riding is more multicultural but less religious than it once was. The 2011 census found one quarter identified as Chinese, with smaller but significant South Asian, Korean, Iranian, Filipino and Latin American communities. Just under two per cent are Aboriginal. While almost half the riding is Christian, slightly more (45.6 per cent) have no religion. About six per cent are either Buddhist or Muslim, and the 2011 census lists no observant Jews.

Professional, scientific and technical services make up 11.2 per cent of the labour force, while retail (10 per cent), healthcare and social assistance (9.1 per cent) are also common careers. Universities and school districts are among the largest employers, though not all their workers can afford to live in the riding.

While oil and shipping have been a fact of life in Burrard Inlet for decades, environmental concerns are far greater in the riding than they once were.

Among all the other issues, Kinder Morgan's proposed expansion of its pipeline is likely to be a decisive one in this election. It may well cut across class and party lines. The residents of Dollarton's waterfront Lowry Lane, where last year a house was offered for close to $7 million, can certainly do the math on what an oil spill would cost them.

So can their Tsleil-Waututh neighbours, who in late May rejected the expanded pipeline.

According to Elections Canada, the polls that now make up Burnaby North-Seymour voted Conservative in 2011: 44.2 per cent went to Tory candidates, and only 35.2 per cent voted NDP. The Liberals got just 15.7 per cent, the Greens less than four per cent.

Yet with just a few weeks to go before the Oct. 19 election, the new riding seems very much up for grabs. A mid-August riding projection by ThreeHundredEight.com suggests the Greens are at 4.3 per cent, the Conservatives at 25.6 per cent, the Liberals at 31.3 per cent, and the NDP at 37.8 per cent, with a 65 per cent chance of taking the riding.

These numbers should be taken well-salted: they are "best estimates" of likely voting if the election had been held in August. Much can happen before Oct. 19, and all four parties will be working hard to improve their own vote.

A stampede of strategic voters?

Recent NDP successes in Alberta's provincial election and the national polls have triggered speculation about an imminent Tom Mulcair government.

That prospect in itself could trigger a stampede of strategic voting toward whoever has the best local chance of stopping an orange tsunami. Taleeb Noormohamed, who ran for the Liberals in North Vancouver in 2011, said then that his party had expected to win -- until reports of the impending NDP Orange Crush in Quebec reached B.C. Then, he said, right-wing North Shore Liberals fled to Harper's Conservatives rather than face a Canada with Jack Layton as prime minister.

If that's a correct analysis, it's a good question whether those defectors now regret their choice and will return to the Liberal fold, or defect yet again to the Tories. And will left-leaning Liberals defect to the NDP over Bill C-51 or the overriding need to defeat a Harper Conservative?

Liberals and Conservatives share almost a century of skill acquired in fighting the NDP, the old Cooperative Commonwealth Federation, and even the workers who launched the Winnipeg General Strike in 1919. The closer the NDP seems to success in Burnaby North-Seymour, the more effort its opponents will put into defeating it yet again.

But this is not Tommy Douglas's NDP. After 50 years in the wilderness, and four years as Official Opposition, the federal New Democrats are a force to be reckoned with -- and so are their opponents.

Burnaby North-Seymour is one of their chosen battlefields, making it a seat to watch right up to the Oct. 19 vote. For a closer look at the key players, The Tyee will profile a candidate every day this week, beginning tomorrow with Liberal tech startup CEO Terry Beech.