At 76, Lisa Schmidt is beginning to worry about staircases. To be specific, the flight up to the first-floor condominium she's owned in an Abbotsford, B.C. retirement complex since 1994. 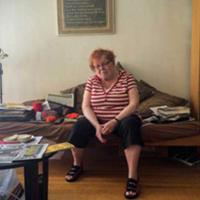 For Renting Seniors, a Subsidy to Soften Sky-High Rents

Her hip has been hurting for some time, but so far her doctor hasn't deemed a replacement necessary. So she bears the pain to run errands and walk her dog, Two-Socks.

It's been harder for some neighbours, particularly those in second-storey units. "My neighbour one over could not walk up and down the stairs anymore," Schmidt said. "She was just waiting and waiting and waiting," until finally approved for a new hip joint.

Schmidt fears the same outlook, but remains humorously defiant. "I will try every which way to get down the frigging stairs. I'll slide down if I have to!"

Age brings mobility challenges to many -- a thought evidently lost on the designers of Schmidt's "retirement" building. And while affordability matters -- 12 per cent of Canada's seniors lived in poverty in 2014, according to Statistics Canada -- what is available can be as big a problem as how much it costs.

The central question for many, said Susan Eng, advocacy vice president of CARP, Canada's largest seniors' lobby: "Will I have to move if I break my hip, have health issues, financial issues, if I lose parts of my family, or when a spouse dies?"

Independence and identity are important at any age. All the more as health and wealth problems nibble away at a person's sense of agency. For that reason, many seniors prefer to stay where they have social connections, family and church friends.

"People want to stay in a home, not an institution." Eng asks, "Why should you have to give that up just because you broke your hip or your mind is going a little bit?"

Mental health risks pose particular problems for housing providers. As the BC Non-Profit Housing Association's research director Jill Atkey puts it, moving can be difficult at any age, but relocating after decades can be especially unwelcome to seniors.

Disorientation is worse for those with failing mental health. Moving people with dementia "out of an area they're familiar with and putting them in a new area without the same networks and locational familiarity can make the disease progress more rapidly," she added.

"When you ask seniors their preferences, they want to age in place," Atkey observed. "We need support that allows them to, so when they do need to move into other housing, they're ready for it."

Mobile, with nowhere to go

Seven-in-10 Canadians 65 and over, slightly fewer than other age groups, live in an urban centre. For them, how cities are laid out matters as much as "mobility" measures like elevators, handrails and wheelchair ramps.

Priscila Krayer Krauss has been studying how Canadian cities might become "age-friendly" for her graduate degree in architecture at McGill University. She's found a "contradictory relationship between affordability and accessibility."

Ramps and handrails only help if they make it easier for seniors to get to services they need. An elderly person may easily negotiate the wide sidewalks and quiet well-paved streets of a typical suburb, Krayer Krauss notes. "But they don't reach very many destinations, because there are only other houses around them."

By contrast, most city cores are well provided with social and other services, parks and recreational facilities. They're usually also the most expensive places to live, while their busier sidewalks can make walking stressful for many seniors.

"The most valuable properties" among seniors, Krayer Krauss observes, "are valued because of their location: if they're in a central area that has easy access to all the facilities, services and hospitals." But for most, price is "this barrier."

She would like to see all neighbourhoods -- whether suburban or downtown -- made more age-friendly. If every area had accessible services and was designed with mobility in mind, she suggests, it would not force seniors to choose between their well-being or their wallet.

France's Baba Yaga House, based on egalitarian values, resident management, and balancing privacy and autonomy with mutual care, has inspired a Toronto seniors community to plan a similar project.

The public should offer such efforts a hand, Krayer Krauss suggests. "Instead of the government just building housing" for seniors, the researcher argues, "subsidies would encourage them to form their own spaces, the way they want to live."

But Ken Greenberg, a former director of urban design for the City of Toronto, believes a tide is changing to seniors' advantage in today's cities. For decades, easy car travel allowed development to segregate people by age and family size. Suburbs were largely set aside for young families with kids. Young singles were expected to buy a condo or rent in a highrise.

Seniors "were further separated still," Greenberg said, "into retirement-type environments advertised as having no children. As you move up the scale in terms of age, and you needed more assistance and specialized care, you'd move from one place to another."

Now however, cities are "trying to put all those things back together again," Greenberg believes. He captures this idea in the phrase "8-80 Cities" -- equally desirable to people at opposite ends of life's spectrum. "Would an eight- and 80-year old feel comfortable and safe in an environment."

Often the same urban design suits both. It's also pro-social, fostering the personal connections lost in isolated housing. "Seniors might get involved in daycare," Greenberg imagined. "All kinds of cross-generational relationships, which are so fruitful, might be made possible in their lives."

Lisa Schmidt's hard-to-climb staircase illustrates that mobility aids alone don't make an "age-friendly city." Despite its discomfort, Schmidt finds much to like in her neighbourhood: grocery stores within walking distance; a nearby park with benches for resting; a caring community in her complex.

Unreliable transit makes it difficult to visit her daughter in Vancouver however, or keep appointments elsewhere in the urban lower mainland. Her situation shows why many advocates see better transit as a priority. Absent community services within walking distance, it helps seniors maintain independence.

Poor transit is one reason so many older drivers cling to their licences long after they should. "Vast numbers of people are living in auto-dependent environments," Greenberg said. "When you take away the car keys, people's identity and independence are traumatized.

"I went through that with my father. It was a terrifying moment for him. He hung on desperately, trying to drive his car with an oxygen tank. We literally had to pry the keys out of his hands!"

The looming election, in which older people are more likely to vote than younger ones, gives advocates a chance to press for policy changes. CARP and 50 other seniors' advocacy groups have called on the federal government to work with provinces to "ensure every Canadian has access to housing appropriate to need, including affordable and supportive housing, and assisted living services."

But CARP's Eng warns voters to be skeptical of enticements. "Are they just election goodies, hoping for a halo effect because you mentioned 'seniors'?" Eng questions. "There's no point giving a discount on the bus if the bus doesn't come anywhere near the corner of your street." She'd also like more financial support directed at low-income seniors.

Schmidt relates. "I live on $17,000 a year, that's it. With that I have to keep up my car, pay my mortgage, pay my insurance, Wi-Fi and cable. Then you still have to eat." A mortgage payment of under $3,500 a year helps make the rest affordable.

And with services nearby, "I just hope I can stay here," she said. Despite the stairs and transit woes, "I'm not planning on going to an old folks home. No thanks.

"I used to work in those facilities. You have to go by all their little rules, go for dinner at a certain time or miss out. I like to get into my kitchen and make whatever I want when I want it. That's independence."