When it comes to protecting our most vulnerable children and youth, British Columbia's government can't seem to get it together. 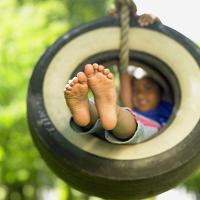 After $66 Million Spent on 'Talk,' Has BC Reworked Aboriginal Child Welfare?

That's the conclusion of a report the Representative for Children and Youth released this morning, auditing nine cross-ministry recommendations made between 2006 and 2013 -- seven of which were never implemented.

These include improvements to reporting on child outcomes, developing a comprehensive anti-child poverty plan for 93,000 kids living below the poverty line, creating a strategy for addressing child and youth mental health, and ensuring better outcomes for indigenous children who, despite making up just eight per cent of B.C. kids, represent over half of the minors in government care.

Just 72 per cent -- a C plus in British Columbia -- of the 148 recommendations Representative Mary Ellen Turpel-Lafond made over 22 reports have been adopted. The province should implement a minimum of 75 per cent, or a B in the province's education system, she said.

"For the Ministry of Children and Families, it's going to be impossible for them to do everything they’re required to do in their five service areas," Turpel-Lafond told a press conference this morning. The ministry's budget has shrunk by $37 million in 2008 dollars since 2008/09 and they are short by at least 300 staff.

In a press call with reporters an hour later, Child and Family Development Minister Stephanie Cadieux denied much of Turpel-Lafond's findings.

"Recommendations listed as incomplete by her office are currently in progress and are certainly complex and do take longer to fulfill," she said, calling the 72 per cent of recommendations adopted "substantial progress."

This includes a child poverty plan, which Cadieux says government has in hand with the community poverty plans her ministry launched with the union of BC Municipalities in 2012. A May 2014 update on the plans showed 72 families have been assisted.

A working group with the BC Government Employees Union is addressing staffing levels. And the ministry's budget? "In fact the ministry's budget has increased by $360 million since 2004/05," the minister said. Any cuts Turpel-Lafond has seen were when money was moved to Shared Services, which all ministries contribute to for common services like IT and bookkeeping, she said, as well as funds given to the BC Public Service Agency, the government's human resources division. Four ministry staff members were also transferred to the Aboriginal Relations and Reconciliation Ministry in the time period that Turpel-Lafond referred to.*

The increase Cadieux cites was prior to the release of the 2006 Hughes Report, an inquiry into the ministry's practices after the death of several indigenous youth in care. The audit made 62 recommendations calling for sweeping changes in the way the government addresses child welfare, requiring more ministry resources.

'NOT FULLY INVESTED': A REPORT

An analysis of the Representative for Children and Youth’s past reports, released today, focused on the B.C. government’s failure to implement cross-ministry recommendations. Across 22 reports released between 2007 until 2013, Mary Ellen Turpel-Lafond identified these gaps:

"I did [one report] not too long ago where a girl committed suicide and the local MCFD office that was supposed to have seven workers had one," she said.

"Those situations occur in British Columbia in places where people are not able to do the work."

In 2008, after three children were killed by their father, Turpel-Lafond recommended B.C.'s attorney general look into implementing domestic violence courts.

This recommendation was brought up again in two subsequent reports before the government's provincial domestic violence plan, released in February 2014, committed to "working with the judiciary and other justice system partners to explore the development of a framework for domestic violence courts."

Turpel-Lafond notes the plan doesn't include poverty and unemployment as important risk factors for domestic violence, nor does it contain clear outcomes and goals.

"I'm well aware that government is focusing on the deficit and its reduction, but perhaps its time to re-evaluate that goal when so many of the children and families are living in poverty," she said.

Between 2007 and 2013 the representative wrote four reports on the failure of government to provide adequate mental health treatment and self-care transitioning for kids and youth, 20 per cent of whom have mental health problems.

By the fourth mental health report in 2013, Turpel-Lafond called on government to create a three-year operational plan for improving services, including creating a minister role for mental health needs of youth transitioning out of the foster system.

It took a year for the ministries of Health and MCFD to respond to the recommendation to say they'd get back to Turpel-Lafond by December.

Cadieux says several improvements have been made, including improving treatment wait times from several weeks to a few hours. However Turpel-Lafond has not seen a report on wait times.

Despite B.C. having one of the highest child poverty rates in the country for over a decade, it wasn't until 2011 that Turpel-Lafond recommended government implement a provincial poverty plan.

Government instead responded with a job-creation plan and a community-based poverty pilot project in seven communities launched in 2012.

"A poor response for a province with a population approaching 4.7 million and 93,000 children living in poverty," today's report reads.

Cadieux said government has reduced child poverty by 37 per cent since 2001 -- although poverty levels fluctuated during that time and remain the highest in the country. She credited programs like housing subsidies and Medical Services Premium eliminations for low-income families for the poverty decrease.

"Of course all of those targeted programs are in compliment with making sure the economy is growing and that people have access to good paying jobs in the communities they live in," she said.

The plan Turpel-Lafond calls for would pay particular attention to the poverty of indigenous families. Over half of the province's 8,000 kids in government care are indigenous, something Turpel-Lafond has addressed in 13 of the 22 reports she's written.

"The human cost of suffering and despair is immeasurable. The economic costs of preventable long-term use of public services, unfulfilled human resources and drain on productivity are very clear. There are many more reasons to act than not," reads the report.

Cadieux says they're still waiting on the federal government to do more for First Nations youth on reserve, but the working relationship with indigenous governments and communities have meant progress for kids off-reserve.

MCFD data available to the representative's office has shown an increase in the critical injuries reported for kids in care to 329 in 2013 from 132 in 2009, with ups and downs in between. But Turpel-Lafond isn't sure if this is because reporting has improved, or conditions for kids in care have gotten worse.

Data collection and analysis within MCFD has been lacking, she said. Aggregate reports detailing recommendations made after a child in care has died have not been produced since 2007, despite being a key recommendation from the Hughes report.

They also stopped producing internal reports to ensure ministry staff are following procedures and protocols between 2010 and 2012.

Again Cadieux disagrees: "Twice a year the ministry produces a performance management report that is helping us to examine the quality of services and how effective those services are," she said.

"It is the most comprehensive report that this ministry has ever produced; it is a work in progress, we continue to add to it. It's more comprehensive than reports produced by any other jurisdiction in B.C."

One recommendation government has managed to implement according to Turpel-Lafond is hiring a single staff person to oversee education planning, monitoring and attainments of children in foster care in each school by September 2009. This plan wasn't fully implemented until August 2012.

Despite many criticisms, the report acknowledges an improved relationship with MCFD. Prior to the appointment of Mary McNeil as minister in 2011, the representative had an adversarial relationship with the ministry, culminating in Turpel-Lafond successfully suing government for cabinet documents she needed to complete a report in 2010.

Turpel-Lafond says she wants to know what Cadieux will ask from the premier to improve her ministry, emphasizing the importance of leadership from both women on this file. "We make our case to the treasury board, to the ministry of finance, to the premier, to cabinet," Cadieux responded. "They are worked through in relation to all other demands placed on government."

As the youth watchdog and family minister continually cite opposing facts and figures, Cadieux told reporters she doesn't believe the disagreements means the relationship is dysfunctional or erodes public confidence in her office.