When the RCMP packed up its regional headquarters at the Fairmont lands in Vancouver in 2012 and moved to the new $1-billion Green Timbers complex in Surrey, the Mounties left behind federal buildings and land that are earmarked for disposal. 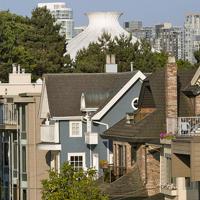 Debate: Should Vancouver Change How It Zones Big Projects?

But to whom and for what? That is what Don Davies, Vancouver Kingsway NDP MP, wants to know.

The 21-acre complex across four city blocks from 33rd to 37th Avenues is to be transferred from Public Works and Government Services Canada to Canada Lands Company, the agency in charge of selling surplus federal property.

The land could fetch tens of millions of dollars for the public treasury and be highly attractive to developers because it sits a few blocks west of the densifying Cambie Street corridor and north of Oakridge Centre, which was approved for a massive redevelopment.

"It's strategically located," Davies said. "It's odd, a lot of people don't know where the site is. It's in a leafy residential neighbourhood; there will be competing interests like commercial, retail or large scale development that will be part of the picture."

The site includes buildings that were used by the RCMP for administration and operations and the 1914-built, Tudor revival-style Fairmont Academy, which has both federal and civic heritage designation.

The Fairmont land was listed along with federal property near Jericho Beach and in West Vancouver in a presentation on Strategic Disposal of Surplus Property in Greater Vancouver to a November 2010 federal workshop. Any attempt to sell the property would be complicated by overlapping First Nations land claims.

"Musqueam, Tsleil-Waututh and Squamish have demonstrated continued interest in all properties," said the presentation.

Davies said he was told by the office of Public Works Minister Diane Finley that up to 17 First Nations groups were contacted about the land.

Davies wants some or all of the land used for social housing and parks.

"This is one of the most valuable public assets in Vancouver owned by the federal government, it's owned by you and I," Davies said.