One morning during the Great Depression, Ted Bruce's grandfather took his mother out to tour the family farm just outside of Estevan, Saskatchewan. Under the broad prairie sky, the fertile land around the Souris River had produced "a beautiful, beautiful crop," Bruce recalls. 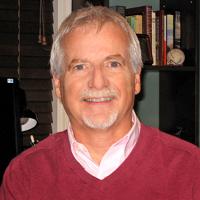 The next morning, they awoke to the bitterest of news for a family of settlers who'd diligently tended the land for generations. "They got up, and the grasshoppers had come," says Bruce. "It was gone -- the whole crop, everything. Gone."

His grandfather gazed out across his once-plentiful fields and knew his fortunes had instantly shifted. "His whole life in front of him was gone. He had to figure out what to do, so he started doing dairy work," Bruce says.

It wasn't the family's only brush with impermanence. Bruce's father worked his entire career for the Eaton's department store chain. When the retail giant went belly-up in 1999, however, so did his father's lifelong pension -- leaving his mother to fend for herself.

"There were enough experiences in my life, even though I'd call myself middle class, to understand how precarious [life] is for people," Bruce says.

Fast forward to today, and the population health expert trained as a psychologist is now "a little bit over 60" and beginning to settle into his new job as executive director of the Portland Hotel Society (PHS), a sprawling, roughly $30-million-a-year Vancouver nonprofit that operates the Insite safe injection facility, plus numerous housing properties and employment programs throughout the Downtown Eastside neighbourhood.

For many years, PHS was lauded as an innovative organization that helped and housed those who, for whatever reason, had fallen through the cracks.

But earlier this year, the registered charity was devastated by the release of two damning audits, which uncovered hundreds of thousands of dollars spent on PHS executives' overseas travel, family Disneyland trips in lieu of health benefits, limousines, spas and inadequate accounting. PHS's long-time board and executives, including founders Mark Townsend and Liz Evans, swiftly resigned.

In the wake of the controversy, Bruce saw an opportunity. He reached out to a colleague at Vancouver Coastal Health, PHS' second largest funder, and offered his help in getting the floundering organization get back on its feet. On May 30, the health authority announced that Bruce would inherit the reins. His one-year contract started June 2.

Bruce has made his life's work the field of population health, which addresses big-picture questions about the health of various socioeconomic groups, and why poorer people experience dramatically different health outcomes than wealthier people. Those inequalities are no more evident than in the Downtown Eastside, where a significant proportion of Vancouver's most marginalized residents live.

Bruce saw PHS as a flagship for tackling some of the neighbourhood's greatest crises at the root. So when the organization's work came under the microscope, he was dismayed to see some critics call its entire mission into question, in particular its harm reduction programs and array of job-creating social enterprises.

"I emailed a colleague at Vancouver Coastal Health and said, 'Gee, this is not a good thing,'" Bruce recalls, leaning forward in his chair in a corner of his cramped PHS office on East Hastings. "It can paint a bad picture of what we do in population and public health. If there's anything I can do to pitch in and help, let me know," he recalls saying.

Bruce retired as executive director of Vancouver Coastal Health's population health program in late January, and when The Tyee reported his appointment a day before it was made public, his colleagues at the B.C. Poverty Reduction Coalition, an advocacy group he co-chairs, seemed surprised. After all, hadn't he just retired?

"I retired from Vancouver Coastal Health -- I didn't retire from life," he says with a chuckle. "I always intended to continue doing activities in population health."

Considering the storm of controversy that brought his predecessors down, Bruce admits he faces a monumental job over the next year. He lists off a few of his key tasks: to "re-establish trust with the community at large about the role of harm reduction," and to put in place processes for accountability to reassure PHS' private and public funders of "good financial management." There are no plans to expand or launch new programming.

Bruce is anxious about being thrust into the public spotlight after so much upheaval in the organization, but he says he's more anxious about "not being able to maintain the engagement of the community that Portland is noted for."

"If we are perceived to be going in a different direction and the community says, 'Portland is no longer what it was,' then I think we've failed," he says.

Amid the audit controversy, the minister responsible for housing, Rich Coleman, told The Globe and Mail that PHS's deficit was caused by the various social enterprises it operates, and that they would no longer be subsidized. The not-for-profit businesses, celebrated by some for providing supportive employment in the Downtown Eastside, include a laundromat, beekeeping firm, coffee shop, and janitorial services.

Bruce defends the social enterprises, insisting they will "continue to be important" to PHS because they "create opportunities" to overcome barriers and improve clients' health. Though the new board accepts the enterprises may need seed money or ongoing investment, they also need to be financially sustainable, he says.

Bruce wouldn't speculate on where the previous administration went awry, except to say the infrastructure seemed a "bit thin" to support and sustain the charity's sprawling empire of services.

One particularly damning revelation in the audits was ex-PHS policy director Dan Small's family vacation to Disneyland in 2012. The trip with his now ex-spouse, New Democrat MLA Jenny Kwan, cost PHS nearly $3,000. Kwan took a leave of absence from the legislature when the trip came to light, though she claimed Small told her the vacation was paid for out of his own pocket.

The former PHS board justified such vacations because they were a way to reward employees in the absence of health benefits. Bruce says the new board will look closely at the possibility of benefits.

And of the Disneyland trips?

"There won't be any more Disneyland trips," he says, without a moment's hesitation. "There will be a higher level of financial accountability within the organization."

Bruce gestures from his new office window down East Hastings towards the Woodward's building, a massive and controversial redevelopment which arose after a months-long occupation by social housing activists in 2002. A decade before that, the building hosted a national department store chain rivalling Bruce's own father's lifelong employer, Eaton's, before it collapsed along with the family pension.

"When you talk about Woodward's down here, I'm often reminded of my own family," he muses. "People here, in this community, their lives are precarious, and we need to understand that.

"It's not their fault. They have barriers that they're struggling daily to overcome... That's what's down here: people have been set back."

Bruce takes issue with some critics' characterizations of the massive charity as part of a "poverty industry" dominating the neighbourhood. "I don't see this as a poverty industry," he insists. "I see it as community coming together to try to resolve problems."

Bruce escorts this reporter down the stairwell from his office, its drab concrete walls brightened by a small, cheery painting. Reaching the exit, he struggles for several uncomfortable moments to unlock the exit, as the desk staffer shouts encouraging instructions.

"I'm pretty new," he says with a smile, as the door finally opens onto the bustling sidewalk. "I'm not even used to my key fob yet. But I like it in here, so I'm fine with that."