[Editor's note: This is the last of a series of reports on successful youth-focused projects resulting from collaboration between indigenous communities and philanthropic organizations. Leading Together is itself a collaboration of Journalists for Human Rights, Tyee Solutions Society, Wawatay Native Communications Society, and the J.W. McConnell Family Foundation, which commissioned this journalism.] 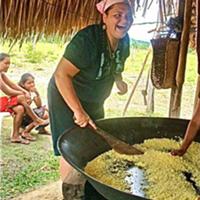 'We Are All One People': Aboriginal Ed Without Borders

ABOUT SACRED CIRCLE AND ME TO WE CLUB

Challenges: Attendance by students. "But once you get students in the door the communication is good," said Alex Meers, Me to We's director of leadership. The program's price tag is considered steep. And developing trust is always a challenge, he said. "We don't come in as experts on Aboriginal issues. We're coming in with expertise in developing leadership capacity."

What works: Working collaboratively with Indigenous partner groups from the outset. People come to understand what Sacred Circle is, adjust it to suit their culture, and take ownership over how it's delivered. Building connections in person and over the phone also helps establish trust and cultivates a relationship, says Meers. "Needs and expectations of Indigenous peoples in Vancouver are different from peoples' in northern B.C. We had to learn to be flexible and work around each community's needs."

What didn't work and how was it fixed: There was a wealth of interest in the program but providing it only during a two week campaign was inadequate. The organization now tries to involve educators earlier so they know what's offered and when it's coming, Meers said.

One at a time, students talked about the slurs they heard spoken about them by non-Aboriginals: alcoholics. Drug addicts. Jobless. Stupid.

"A lot of the non-Aboriginal kids cried as they listened. The passion that students spoke with brought emotion into the room," Inden said. "For the first time I think their voices were heard."

The revelation was a watershed moment during a special week-long program called Sacred Circle, which brings kids together and teaches them leadership and team-building skills.

Developed in 2008 by social enterprise Me to We, Sacred Circle seeks to create leaders among Indigenous youth. Young people learn from specially designed curriculum that blends Aboriginal tenets such as the Seven Teachings and Medicine Wheel with local Indigenous culture and leadership training developed by Me to We.

'Listening to each other's voices'

Originally a trading post, Fort St. James is located in north-central British Columbia. Of the 5,000 people who live in the Fort St. James region, there are 1,355 people of First Nations origin, and they come from First Nations that dot the area such as Nak'azdli, Yekooche, Binche, Tl'azt'en, Middle River and Takla Lake.

At Fort St. James Secondary, Inden is the coordinator of the Me to We club and has been involved with social justice issues at the school for the last three years. There is a social divide between Indigenous and non-Indigenous students and bringing Sacred Circle to the school was a no-brainer, she said.

Inden got to work fundraising to pay for the four-day initiative, which cost $2,000 per day to host. Local groups such as the Fireweed Women's Collective, Nak'azdli Alternative Justice program and the school district paid for half of the fee while consulting group Accenture provided a bursary for the other half.

Inden invited 30 students to participate in the workshop; 23 accepted. "The group was about half Indigenous and half non-Indigenous, which was ironic because that's representative of the school's demographic," she said.

The group divided along racial lines at first, Inden said. A series of teamwork exercises broke the ice though. Students drew a map of where it was safe in the community and where it wasn't. Another exercise forced students to problem solve to get themselves out of a hypothetical predicament. "Everyone had to contribute something, even kids who were shy," Inden said.

Working together and problem solving are core philosophies in the program, said Alex Meers, director of leadership for Me to We. "It's about developing leadership skills, but it's also about finding out what you're passionate about and planning for it," Meers said. To do that, you need to learn how, something Me to We already has experience with.

The arc of events with Sacred Circle began with a conversation between Craig Kielburger (co-founder of Me to We and Free The Children) and former Ontario lieutenant governor James K. Bartleman, Meers said. "They agreed on the importance of empowering young people in Indigenous communities, something we were already doing in developing communities around the world," he said.

First Nations youth need to have the ability to take the issues which impact them and make their own impact on these issues, Me to We spokesperson Tamara Kaftalovich said. "They stressed that the solution for some of the challenges was about empowerment, however no organizations [or] people were focused on this aspect at the time."

Me to We already had a core set of leadership skills and empowering exercises to impart. Facilitators were eager to share team-building, network developing, public speaking and planning workshops. The organization first worked with Indigenous partner groups and the Nanaimo-Ladysmith school board in B.C. to develop the program's curriculum, Meers said.

The resulting program has since been delivered eight times in B.C. -- in northern B.C., the Lower Mainland, Vancouver Island and in school district 48 Sea To Sky. The program has also been delivered in Alberta, Ontario, Saskatchewan, the Northwest Territories and the Yukon.

Back in Fort St. James, being in a classroom with 22 other students was like a day at home, said student Morgan Prince, 18. "I'm pretty sociable to begin with so I met people who go to school that I didn't even know before," he said. "I come from a big family anyway so it was just like an average day for me."

Prince contributed but he also listened and he learned a valuable lesson. "You have to watch what you say and really watch who you judge," Prince said. "I learned that people have feelings and that they can be hurt."

Prince said he enjoys taking carpentry at school and hopes to join Bold Eagle when he graduates, a special program that combines Indigenous culture with military training. "I know I can do it. This gave me the confidence to do it," he said.

Future generations of students could benefit from the program if it was ongoing. "I wish I could offer it all the time now," Inden said.

The program may be a hook to keep kids in school. It's common for Indigenous students to not finish high school and instead go to work in the region's booming economy. According to a municipal report, Fort St. James has an employment rate of 65 per cent, which is higher than the provincial average of 61 per cent. Twenty-three per cent of residents possess a high school certificate. Median earning in the region is $35,000 compared to $25,000 in the province. Only six per cent of the population is considered to be in the low-income tax bracket.

"It's common for students to choose work and not finish school. It's a reality," Inden said.