On a bright midsummer afternoon, Haley Bernard surveyed the Pictou Landing First Nation with mixed feelings. On the one hand, the rural Mi'kmaq community is like a close-knit family. On the other, it's plagued by drug and alcohol abuse. 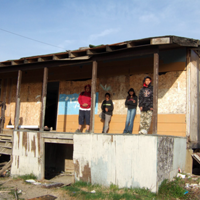 In Search of an Aboriginal Future

ABOUT THE RED ROAD PROJECT

The need: Helping Indigenous youth in Mi'kmaq communities turn away from drug and alcohol abuse.

What worked: Adapting cultural traditions to activities, such as organizing the cultural camp for youth leaders; working through youth leaders across social media; engaging outside youth-engagement initiatives such as LOT; bringing on charismatic youth leadership for the project in the second year.

Challenges: Building genuine band and community ownership of activities; getting youth to show up to activities in new initiatives.

She wants to see change -- a generation of culturally strong, educated youth who are drug and alcohol free. Bernard hopes the Red Road Project will lead the way.

"We aim to educate Mi'kmaq youth to lead a healthy lifestyle through their culture, language, fitness, connecting with their elders and peers in their community, conquering addiction," said coordinator Savannah Simon.

Youth leaders like Bernard walk the talk. She graduated in the spring from Cape Breton University with a bachelor's degree in Mi'kmaq Studies. For the summer, she worked as a youth leader. Bernard signed a contract to stay sober, but she said there's more to it than that. "The Red Road Project is about embracing your life and just being happy and doing good things," she said. With that mindset, Bernard opens the gym at the community recreation centre for basketball, heads a running club and holds traditional craft classes and bonfires by the shore.

With 23 youth leaders in 13 Mi'kmaq communities in Nova Scotia and New Brunswick, this project is the first of its kind in Atlantic Canada. Representatives from the RCMP now sit on its advisory committee, and it currently has a budget of $100,000 funded by Aboriginal Affairs and Northern Development Canada. Further, a connection with the Halifax-based youth network Leaders of Today (LOT) has provided training opportunities in leadership and public voice.

LOT Coordinator Steve Gordon explained that his group helps youth influence government policy. "It's about building leadership and connecting new youth leaders with provincial politics, from the minister down to provincial staff," he said.

Gordon said networking creates a lot of opportunities for youth groups to learn from one another. He looks forward to working closely with the Red Road team on this and future community action projects.

Laurianne Stevens was also encouraged by early feedback and wants to see these kinds of partnerships grow. Stevens is a director with the education working group that oversees the Red Road Project. She admitted there's a learning curve and changes made in the second year have been successful. Hiring charismatic Savannah Simon boosted morale. And monthly reports made youth leaders more accountable.

Still, challenges remain. Stevens said the distance between the Mi'kmaq First Nations makes communication difficult, despite the use of videoconferencing. So the goal for next year is to partner with the communities. With plans to secure additional funding, Stevens would like to hire more coordinators.

"It's about getting the band involved. We want the community to have ownership, so everyone knows about it," said Stevens.

In addition to its own website, the Red Road Project is on Facebook, Twitter, Instagram, and YouTube. Contests for logos, rap songs, and videos help spread the word. Assistant coordinator Brittany Prosper is working on a brochure to hand out to parents, schools and powwows.

Each week, Prosper and Simon combine one of seven sacred teachings with a chapter from Sean Covey's book, The 6 Most Important Decisions You'll Ever Make, which deals with teen issues. For example, youth leaders will focus on the sacred idea of trust and read about teen sexuality. The coordinators give ideas for activities but the youth leaders adapt that plan to their own community.

The range of activities is broad. Nature walks, sweats, talking circles, sports and fishing have proved popular. Prosper organizes elder visits once or twice a week in her home community, the We'koqma'q First Nation in Cape Breton.

"We just talk and bake, make food like Indian tacos. I like to get their perspective," said Prosper. "We want to tie traditional culture to all our activities." 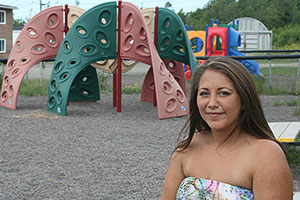 Part of the challenge is figuring out what works and what doesn't. An even bigger challenge is getting people to show up. But with patience and persistence, organizers can see the combination of social media, youth role models and clear links to tradition starting to work. 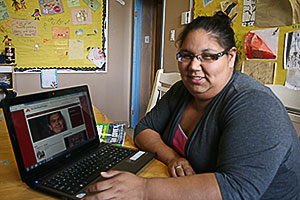 Haley partied in her teen years like all her friends. When she started to struggle in school and suffered bouts of depression, she knew she had to make changes. Over the last two years, Haley started taking language courses, going to sweats, and dancing at powwows. "I still go out with my friends. I know I'm not missing out on anything. And I make sure they see that I can still have fun and be myself." 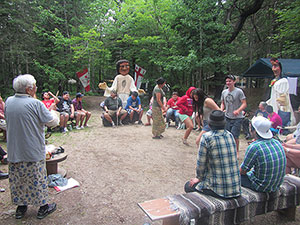 Building unity so that youth leaders can take the positive energy back to their communities.

All the youth leaders gathered at a cultural camp before the summer. They spent five days in a technology-free teepee and participated in smudges, talking circles and other traditional activities.

"Everybody left with such unity and a strong bond which is so crucial when you are a sober, Mi'kmaq youth leader, because we're very rare," says Simon.

The purpose of the camp is to empower the youth leaders and impart a positive energy they can take back to their community, along with their own Red Road teepee. "When you're doing traditional activities, you can't go if you're doing drugs and alcohol. And that's what's broken that connection with everyone and their cultural, spiritual self," said Bernard.

Looking ahead, Stevens wants to further expand the group's scope. Red Road leaders visit schools and last March, gave a presentation at a Crime Prevention Symposium in Halifax. Everyone involved wants the Red Road to eventually have a presence in all Atlantic Indigenous communities. And Simon would love to see the Red Road go national.