They are the ultimate eyes in the sky that have revolutionized flight. They could become important tools to fight forest fires or rescue lost boaters or hikers. But civil libertarians say they are a threat to privacy if police buy fleets without public input or oversight. 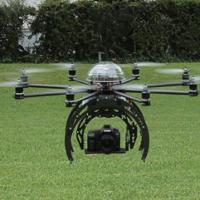 They are unmanned aerial vehicles -- better known as drones -- and they are here in British Columbia.

A briefing note for the B.C. government's director of police services says the regional RCMP operations manual does not prohibit the Mounties from using drones in the province.

"UAV may not be used for covert surveillance, except in special circumstances where it alleviates imminent risks to life or safety [warrant required]," said the Feb. 19 document for Clayton Pecknold, obtained by The Tyee via Freedom of Information.

The briefing note said the RCMP has 18 drones under a 2010-established national program, but a Transport Canada spokeswoman said that the RCMP's E Division was granted Special Flight Operations Certificates to fly drones based in Prince George, Kelowna, Surrey and Nanaimo.

"All four [certificates] are currently valid but the details are not available for safety and security reasons," said Sara Johnston. "Those are the only [certificates] we have issued to police forces in B.C."

The previous Transport Canada permit for the RCMP, which expired in August, allowed it to fly drones as high as 275 feet above ground during daytime and 100 feet at night, but not over spectators or within 30 metres of buildings, vehicles or persons involved in an operation.

The briefing note said the RCMP drones "are primarily used for search and rescue (of missing persons), crash-scene analysis and crime scene mapping," but police had not completed an assessment of the impact of drones on privacy.

RCMP did not respond with any comment after a Tyee query.

The Office of the Information and Privacy Commissioner said E Division consulted with B.C.'s official privacy watchdog. A spokeswoman said Commissioner Elizabeth Denham "has significant concerns about the use of drones by law enforcement" but has not made any announcement regarding a public report on drones. Denham does not have the power to approve or reject policies or programs, but can offer guidance and feedback or investigate privacy breaches.

The briefing note called drones a "low cost, low risk resource for missions deemed too dull, dirty or dangerous for manned aircraft." Drones can be operated for 1/30th the cost of manned aircraft and also have applications in scientific research, energy sector mapping and forest fire detection. Beyond the military use for "threat elimination," drones can be equipped with facial recognition systems, license plate scanners, thermal cameras, cellular scanners and wifi sniffers.

"Everything about how Canadians want to see these new technologies employed and what the obvious dangers are have really not been up for public discussion," Vonn said. "We don't want to have policy by disaster, policy by scandal, the way that we have had in some of the new technologies, like Tasers."

Unmanned Systems Canada, a domestic trade organization and lobby group for the drone industry, counts 500 members. Its annual conference draws more than 300 delegates, with this year's held in Vancouver Nov. 12 to 14.

Conference chair Ulrich Jaggi concedes that the drone industry operates under a cloud of suspicion.

"That's one of the issues that we, as an association, are trying to tackle head-on: getting public trust for these systems," said Jaggi, an aerospace consultant and retired ex-Canadian Air Force officer. "There is a lot of focus on killer drones. The sector we deal with through the conference is really focused on more applications than strictly surveillance."

Despite myriad other uses for the technology, so-called "killer drones" have attracted the most international headlines for their role in the U.S. war on terror. Human Rights Watch and Amnesty International say the remote-controlled bombers violate international law.

Jaggi said practical Canadian civil applications could include serving the oil, mining and power generation industries, and policing and search and rescue. Privacy issues and safe operation of unmanned vehicles in manned airspace are today's challenges.

"Personal use of these systems is going to become more widespread; that's where the challenge is going to be," Jaggi said. "It's a little harder to regulate personal systems."

Experts from the National Research Council and the University of Victoria to vendors of handheld surveillance drones that resemble high-tech toys populated the trade show.

There was also a booth for General Atomics Aeronautical Systems Inc., the San Diego drone giant whose wares are used for combat missions above Pakistan and Yemen and to patrol the borders with Canada and Mexico.

During a Nov. 14 seminar, deputy director of strategic development John Porter showed a video of a Predator drone dropping four bombs from 40,000 feet on a target.

"We've got an interoperable system that's being acquired by more and more countries internationally and we'd certainly like Canada to be one of those," Porter told delegates at the conference, which received a $40,600 subsidy from the federal government through Western Economic Diversification.

Porter also promoted use of the Predator for fighting forest fires and keeping ports secure. He joked that the joint precision air drop system's GPS-guided, parachute-delivered survival kit could be too precise.

"It will accurately be delivered directly to that survivor, so accurately that he might have to duck," Porter said.

Transport Canada's Johnston said 293 permits were issued from Jan. 2007 to Jan. 2012 for drones in civil airspace. A report scheduled to be released Nov. 18 by Block G Privacy and Security Consulting will shed more light on the quiet spread of drones in Canada and how police agencies are anxious to embrace the technology.

"What this report is going to say is that the idea that municipal police aren't involved with UAVs is problematic on the basis of the findings of this report that show the municipal police departments have got seconded personnel who are doing training with U.S. military on drones in Washington State right now," said Vonn, who has read the report.

U.S. Customs and Border Protection has a fleet of Predator B drones, similar to the ones used in combat over Pakistan, Afghanistan and Yemen. CBP drones, piloted remotely from California, have flown surveillance missions over the northern border with Canada since 2009. The 11-metre long vehicles, which cost $17 million each, can cruise at 313 kilometres an hour, up to 15,000 metres above ground and operate as long as 20 hours.

In October, Richmond-based MacDonald Dettwiler and Associates announced an $11.3 million contract to supply AeroVironment Raven B drones to Canada's Department of National Defense.

"Raven can be operated manually or programmed for autonomous operation, utilizing the system's advanced avionics and precise GPS navigation," said the AeroVironment website. "With a wingspan of 4.5 feet and a weight of 4.2 pounds, the hand-launched Raven provides aerial observation, day or night, at line-of-sight ranges up to 10 kilometres."

In February, B.C.'s Justice Ministry seemingly awoke to the drone phenomenon and its top policing bureaucrat wanted the province's police forces to provide him a progress report on who had drones and who wanted drones.

His letter said the province was "in the process of assessing the deployment of this technology" and requested copies of policies and procedures, privacy impact assessments or verification of consultation with the privacy commissioner, and Transport Canada compliance documents.

"Several, but not all police agencies responded to the Ministry's request," said a statement to The Tyee from the Ministry of Justice.

RCMP and civic police in Nelson, Victoria and Vancouver filed the only responses to the original request.

"The only responder who indicated they currently have a UAV is the RCMP who provided the supporting documentation that was requested," said the Ministry statement. "On Oct. 23, a reminder was sent to police agencies Abbotsford, New Westminster, West Vancouver, Oak Bay, Saanich, Central Saanich, Delta. None currently have UAVs -- nor do Stl'atl'Imx Tribal Police and Transit Police."

Transit Police spokeswoman Anne Drennan said: "At this time, Transit Police does not have any drones or the intention of acquiring any drones. Accordingly, we do not have a policy statement or a [privacy impact assessment] regarding drones."

"There is also no current plan to start using them," said Vancouver Police Const. Brian Montague. "We simply would not create a policy or procedure for a tool we do not have."