Job service providers say they are worried about the federal government's plan to fund a new Canada Job Grant with money previously targeted to some of the country's hardest to employ people. 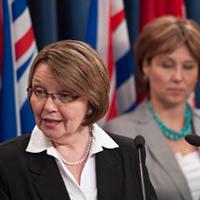 The federal government is making the change on April 1, 2014 without consulting provincial or territorial governments, people in the jobs and skills training sector or the public, said Chris Atchison, chair of the Canadian Coalition of Community Based Employment Training.

"It is a recipe for disaster and it has boondoggle written all over it," he said.

Norma Strachan, the chief executive officer of ASPECT (the Association of Service Providers for Employability and Career Training) said, "The trouble with the federal government is nobody has any idea what their plan is, so everybody feels under threat."

Earlier this week the labour market ministers from all the provinces and territories released "Building Skills Together" a report critical of the federal government's direction, The Tyee reported.

"We all agree that engaging employers in improving the skills of their employees is important to effective training," the report said. "However, provinces and territories are also unanimous in our belief that the proposed Canada Job Grant, a one-size-fits-all program, is not the best tool to meet this objective."

The Canada Job Grant, when the program starts, will provide up to $5,000 per person for training in situations where that amount is matched by an employer and a province or territory.

The funding will come out of money now provided to provinces and territories under the Labour Market Agreements (LMA), which are for unemployed people who are not eligible for Employment Insurance benefits and for employed persons "who do not have a high school diploma or recognized certification, or have low levels of literacy and essential skills."

Programs provided under the LMA aim to reach youth, older workers, First Nations people, people who speak English as a second language, those who need help with literacy and others who have barriers to finding a job.

The federal government signed the six-year LMAs in 2008, as well as related Labour Market Development Agreements, as part of a process that transferred the management of job and skills training programs to the provinces and territories.

"It's been such a complicated process to go through the devolving of both the LMA and LMDA funds, it would be incredibly debilitating to have that overturned and go back to one national [program] across Canada," said Strachan. "It was the expectation [the funding] would just rollover. It's caught everyone off guard."

Pulling back on the LMA is premature, she said. "I haven't seen any reports, and I should have been able to, that show the [level of] success."

Pullback will be gradual: feds

The money for the Canada Job Grant will be pulled out of the LMA gradually, said Alexandra Fortier, a spokesperson in the office of Jason Kenney, the minister of employment and social development.

"One of the greatest challenges to Canada's continued economic growth is the skills mismatch which makes it difficult for employers to fill jobs," she wrote. "Governments need to work together to better ensure that Canadians have the skills required to fill the jobs being created. Employers have been expressing frustration for some time that they are excluded from direct involvement in training programs."

The Canada Job Grant "responds to this request by employers" and will bring the federal, provincial and territorial governments together with employers " to invest in skills training for unemployed and underemployed Canadians so that they are qualified to fill the high-quality, well-paying jobs available," it said.

"Minister Kenney looks forward to meeting with provincial and territorial colleagues this fall to discuss important labour market issues and to move forward with timely implementation of the Canada Job Grant," Fortier wrote.

And while Kenney may not have met with the ministers who this week criticized the lack of consultation, Fortier's email said he "has met with dozens of stakeholders in the past few weeks who strongly support the Canada Job Grant, and who provided useful feedback on how to further improve it."

Several sources said they suspect the federal government's main goal for the Canada Job Grant is to get more credit for the money they put into employment programs. Despite writing the transfer cheques to the provinces and territories, the federal government has largely been in the background in programs funded through the LMA and LMDA.

The government bought pricey advertising slots during the NHL playoffs in May to promote the Canada Job Grant, even though it wouldn't exist for nearly another year.

There are also questions about who will deliver the program, whether the federal government still has the capacity to run such a program or whether it will have to be contracted out. Fortier said she would follow up on the question, but did not respond by publication time.

Strachan said that if the federal government were putting new money into the Canada Job Grant, instead of clawing it out of the LMA, the criticism would be much more muted. "It's the reduction of the LMA grants that's of concern to everyone," she said.

Or as Atchison put it, "It's going to be piloted at the expense of marginalized people."