The Georgia and Dunsmuir viaducts have stood as a testament to a scrapped plan for an inner-city freeway system for over 40 years, and a discussion about the future of Vancouver's downtown core is now centered on whether or not the city should keep them around. 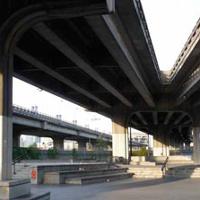 Fall of Viaducts Could Aid Rise of Eastside

The city held an open house Tuesday afternoon to get a feel for the public opinion surrounding a potential plan for the removal of the viaducts. Panels were set up in the atrium of the Woodward's building outlining the plan for the future of the neighbourhoods in the east side of downtown, should the viaducts be removed.

The plan focuses on the transformation of the current unused area under the viaducts to a mixture of park space and affordable housing, with a new road system to handle the traffic normally transported by the viaducts.

The design showcased at Tuesday's open house was originally a submission to the re:CONNECT competition last fall, which invited planners and engineers to submit ideas for redesigning the area now devoted to the viaducts.

Vancouver city councillor Geoff Meggs has been at the forefront of the viaduct debate since 2009, when he requested staff to do a study on the benefits and costs related to keeping the viaducts.

"For the first time, the city is sitting at the edge of a very important decision, which is: should we plan for the future of this crucial area with the viaducts or without them," Meggs said. "Now for the first time, engineering and planning staff are saying that you should take them down."

The city has proposed creating a mosaic of parks, with a pedestrian and cyclist path linking the historic eastside neighbourhoods directly to False Creek, and a road system connecting Georgia St. to Pacific Boulevard, and combining Pacific and Expo before reaching the SkyTrain terminal.

'Make sure they hold true'

"I love the idea that the city has out at the moment; I think it's beautiful," said Kate Isaac, a member of the Stadium Neighbourhood Association who took in the exhibit, adding, "I think what we need to do though is make sure that they hold true to their design."

"Our main concern is what's going to happen in that area, given that it's essentially our front and back yards," Isaac said. "I think if we were overpopulated with condos and we lost some of that green space, and there was no plan for some sustainable housing, then we could be in really big trouble."

Isaac hopes the city will present a definitive plan that guarantees the area will be used for parks and affordable housing, rather than more highrises.

Alan Mcfadyn, a community member who attended the open house, thinks the city is simply making way for developers to build more condos.

"This is about development. It's about money. And what it is about is building more big high towers to make money. And what developers do, is when something is in their way, whether it's a tree, or now they are moving on to viaducts, they knock it down to build what they want to build to make the money off that," he said.

San Francisco's been there, done that

Vincent Fodera, a resident and business owner in Strathcona, referenced the revitalization of neighbourhoods in the San Francisco districts after their viaduct was destroyed following a 1989 earthquake.

"The whole area came alive. All the shops reopened and all the abandoned houses were fixed up," Fodera said. "The viaduct just was killing the area, and that's what it's doing in Vancouver, killing the whole area."

Others in attendance weren't quite as impressed with the city's proposal. Ryan Coghlan, who lives on Main St. close to the viaducts, thinks that the city can make use of the area under the overpasses without removing them.

"Right now they've got all this space underneath the viaducts that's been completely wasted for the last 20 years," Coghlan said. "It seems like there should be a design solution they can use to fix that without having to go through the costly process of removing the viaducts altogether."

A small table was set out at the open house with a questionnaire in which community members could voice their opinions to city council. If the council accepts the idea, based partially on the community's response, it will start a full-scale plan to remove the viaducts and begin redesigning the area.

The report, including public feedback about the plan, is set to be delivered to the city council by July 25.

Two more open house showings will be held this week, on Thursday afternoon at the Creekside Community Centre, and on Saturday morning at Central Library Promenade.