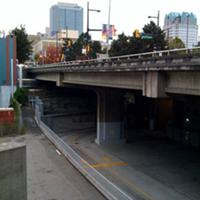 Time for Vancouver to Tear Down Its Viaducts?

The demolition and removal of the Georgia and Dunsmuir viaducts could begin in as little as five years, opening a wide swath of virgin land to public space and development -- and forming the eastern core of Vancouver's new 21st-century downtown.

The early results of a feasibility study unveiled Friday, April 7 at Simon Fraser University's Harbour Centre show that three "viaduct removal concepts" are currently being considered by the City of Vancouver, ranging from removing 20 per cent of the structures in five years to complete removal in 20 years.

The viaducts, which connect Vancouver's eastside to the downtown via raised concrete "bridges," are the only major pieces of Vancouver's abandoned 1970s freeway design ever built -- a plan that would have destroyed much of present-day Strathcona and Chinatown. At the time, a funding shortfall and an extremely effective grassroots protest ensured that the rest of Vancouver's freeway vision never materialized.

Now almost 40 years old, the viaducts have created an unusual opportunity, one which has city planners and developers collectively salivating: land equivalent to about five city blocks underlies the structures, which would reappear as if by magic if the viaducts disappear.

"Let's make a bold decision to get rid of the viaducts," said Vancouver's visionary former co-director of planning, Larry Beasley, one of five speakers at the capacity-filled event presented by SFU's City Program. "Then, convene a great international urban design competition to design the eastern part of the core. Let's decide to design our city."

Olympics were just a test

The 22-day closure of the viaducts during the Olympics was a test that has emboldened city engineers and planners to move forward. "Nothing fell apart, there was congestion but the system functioned," says Vancouver city engineer Peter Judd. "We always over-estimate the negative impacts and underestimate the resilience and intelligence of our residents."

The City of Vancouver has been looking at the viaducts since late 2009, when council, led by Vision Vancouver's Geoff Meggs, requested staff to report on the "potential costs and benefits" to the city of removing or converting the Georgia and Dunsmuir Viaducts -- including an examination of the financial impacts, urban design considerations, and need to ensure traffic could still flow. The first phase of a study started in June of last year. (See the latest staff update to council here.

A preliminary Transportation Review unveiled April 7 shows that almost half of the traffic on the viaducts originates within the city of Vancouver, and there is unused capacity on parallel arterial streets like Expo, Pacific, and Hastings -- which suggest traffic could be accommodated if the viaducts were partially or completely removed.

The Rise of the Eastside?

Not long ago, the Downtown Eastside was the heart of city business and social life; developing the land beneath the viaducts promises to shift some of that life back. Such measures would enable what Beasley refers to as a "web of urban activity from Stanley Park to Clark Drive, with the viaduct at the centre, not splitting it apart."

Beasley threw out a challenge to the younger planners in the crowd. "We need to do an urban design for the eastern end of our future downtown," he said. "The False Creek flats and viaduct lands are where Vancouver will be re-envisioned."

The potential benefits of opening this space are huge, he added. Viaduct removal will create new opportunities for housing and office space, which will further reduce the commuter trips into downtown; the availability of this new downtown land could also take development pressure off the Downtown Eastside.

The first Georgia Viaduct was built in 1915, just around the time that automobiles were gaining a foothold in cities across North America. By the 1950s, most cities developed freeways as a way to move massive volumes of traffic from the new suburbs into city cores. "Freeways would have made this city a terrible place and the people here in this room [urban planners] could not have fixed it," said Beasley.

Video produced by Kurt Heinrich describes the city's current study of viaduct removal, and how some community groups have reacted to the idea.

Across North America today, in cities like Boston, San Francisco, Seattle and Toronto, planners are reconsidering their freeway experiments. The experience of Seoul, Korea, in particular, demonstrates what is possible. An inner-city, 14-lane expressway originally built over a river bed was removed (see before and after picture here) in 2005 and replaced by a 5.8-kilometre-long public space oriented around the daylighted stream; real estate values have jumped dramatically, crime and air pollution have dropped, and the removal of blacktop and traffic has lowered the downtown temperature.

Amazingly, the entire project was planned and executed in six months -- the time it typically takes Vancouver to complete a traffic circle.

Voices of the people

On this night, talk of tearing down the last vestiges of the Vancouver's 1970s freeway misadventure clearly resonated with the crowd. The 1972 construction destroyed a poor black neighbourhood called Hogan's Alley; during public comments, one audience member insisted this very name must remain after the viaducts are gone.

Others in attendance had more practical concerns. Bev Davies, a punk rock photographer who fought against the original freeway (in particular, the plan to bore a tunnel beneath Burrard Inlet) wants the viaducts gone because more than 40,000 cars pass her front door every day at Princess and Prior streets. "I'm hoping for this [plan] or an earthquake," she said.

But the night's sober reality check came when anti-Gateway freeway activist Eric Doherty took the microphone. "There are viaducts and freeways being built all around Vancouver right now," he said. "The Georgia Viaduct is just a high value postage stamp."