The BC Liberal government said it wanted citizens to understand the tough trade-offs when budgeting in an economy so tight that Premier Christy Clark had announced job creation her top goal. 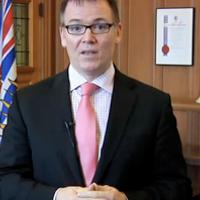 So with some fanfare last month the government launched a website allowing citizens to play finance minister on their own computers.

The exercise proved controversial -- and new details about who got the software work and how are unlikely to soothe critics.

Delib, the company hired by the Ministry of Finance for the My B.C. Budget interactive simulator website was awarded the contract without competition, The Tyee has learned.

And even though experts say there are software design firms in this province capable of creating a similar product, the company that got the work wasn't British Columbian. It was just plain British.

The B.C. government's Direct Award Justification and Pre-Approval Request form, obtained via Freedom of Information, claimed the ministry couldn't issue a request for proposals because of "tight timelines."

"Delib was the only service provider that was able to deliver an off-the-shelf product within the timelines of this project," said the document. "The timeline from the identification of the need to the delivery date of the solution was not long enough for a competitive procurement process."

The Bristol, England company was hired Nov. 15, 2011 for $18,630. Deliverables included the yearly licence, four days of customization work, the YouGov post consultation report and off-line paper simulator. The individual costs were censored, but the Delib website shows that it charges $1,295 per day for customization.

Delib describes itself as a "digital democracy company," and boasts clients like the U.S. Department of Homeland Security, which used a Delib app for crowd sourcing dialogue on its four-year plan.

Finance Minister Kevin Falcon launched the My B.C. Budget website Jan. 10 to invite British Columbians to balance the budget for 2013-2014.

It uses forecasts from the 2011 budget and September quarterly report and is an example of the so-called "game-ification" of government communication. Users are challenged to balance the province's $43.46 billion budget by starting with a $458 million deficit. The government is required to balance the budget in 2013-2014.

Prof. John Robinson, executive director of University of B.C.'s sustainability initiative, said the government could have kept the business at home by adapting the locally pioneered MetroQuest urban development simulator. MetroQuest, a UBC spinoff based in Gastown, can be used on tablet computers and at kiosks.

"I support using local capability where possible," Robinson said. "It might have been useful for the province to contact some of us at UBC who work in this area, or local companies like Envision."

When Delib's simulator was rolled out by Falcon, some critics slammed it for limiting how much users can rearrange the budget, and herding the game player by giving comments that lean positive or negative depending on decisions punched into the system.

NDP finance critic Bruce Ralston questioned the intent of whole exercise, accusing Falcon of using the calculator to create a "phony" impression that the public was being invited to help craft the coming budget.

UBC's Robinson, who has for two decades been involved in creating and using interactive software to help the public understand difficult policy trade-offs, called the government site a novel way of making hard-to-find information available to the public. The My B.C. Budget simulator offered an opportunity for "citizens to express their views on complex public policy issues."

But he saw built-in limitations. "The tool is set up with an initial deficit. So the whole game is to reduce that deficit," Robinson said. "That may or may not provide information on what people's priorities would be if they started from scratch, so to speak."