LOCAL FOOD TAKEAWAY: Where to find food processed on the farm

Solution: If you're in Vancouver pop in to Home Grow-In or Edible BC on Granville Island and ask the staff which products they carry are farm processed. Both are excellent resources and supporters of B.C. food.

You can also have a look at the British Columbia Specialty Food directory. This directory is produced by the Small Scale Food Processors Association This SSFPA aims to be Canada's leading support organization for small and medium food-processing businesses. Many SSFPA members are farm focused. 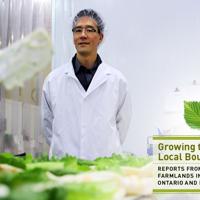 Just north of a sharp bend in the Puntledge river on the edge of Courtenay, B.C., sits Nature's Way Farm. Arriving at the farm-gate, there are two options for entry. One is through the welcoming door that leads to Tria Culinary Studios and the retail outlet for Blue Moon Winery.

I veer to the right, bypassing this obvious choice and enter through a slightly skewed wooden gate where I am quickly set upon by Gattie, a hefty Bernese Mountain dog who promptly sits on my foot in a maneuver she's learned to demand attention. Once satisfied, Gattie releases her hold and I walk through to a central courtyard that offers a view of the 5.7-acre farm. Blueberry bushes, dormant for the season, sit straight-ahead, a farmhouse with cedar shingle siding is to the right and to the left is a building that I'll soon discover doubles as an office and a winery. It's in this final, also cedar clad, two-story building that I find farm owners George Ehrler and Marla Limousin hard at work on one of their many ventures.

Since buying the land in 2004, the couple has transformed it from a struggling blueberry farm into a thriving enterprise with multiple income sources. (The pair lucked out when the world went gaga over the anti-cancer properties of blueberries a month or so after they bought the farm.) The property houses three distinct farm-focused businesses along with acting as the HQ for their off-farm planning and consulting business.

Processing is a link in the food chain where a good chunk of the money is made. When it's suitable, an on-farm processing facility can act as a solid foundation for the rest of the farm.

Farming with an entrepreneurial bent

Like most farmers I've met, Ehrler (by day an engineer), and Limousin (a community planner and landscape architect) didn't get into farming for the money. The married couple was initially looking to buy a condo on Mt. Washington so their family would have easy access to the ski hill. But soon after Ehrler showed Limousin a listing he had found for the property online, they used one of their kids' school field trip as an opportunity to see the farm and a week later they were farmers.

"We could, and have, sold all of it fresh," says Ehrler of the 24,000 pounds of blueberries they harvest annually from a three-and-a-half-acre planting. Their entrepreneurial bent helped them realize that they would get a better economic return for their efforts if they had a diversified operation.

Along with the produce from the farm itself, including berries of all sorts, garlic, salad greens and other ground crops, Nature's Way is home to Tria Culinary Studio which offers cooking classes, on-farm full moon feasts, and made-to-order crepes at events throughout the Comox Valley. Tria also highlights the products of the third farm enterprise, Blue Moon Winery.

"We were just looking out our bedroom window and said 'What about wine from the blueberries,'" says Limousin. After some Internet-based research they realized a fruit winery was doable. Another stroke of luck had Ehrler hopping on the ferry to nearby Quadra Island to buy almost all of the equipment they would need to get started from a fruit vintner that was calling it quits. Four years since the first test batch, Blue Moon Winery is hitting its groove. 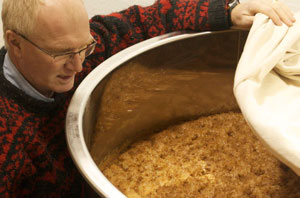 George Ehrler keeps an eye on a batch of fermenting wine.

"Our production will be ideally somewhere between 10- and 13,000 litres," says Ehrler. While this keeps Blue Moon squarely in the small estate winery category, some rough mental math demonstrates that turning blueberries that sell for $5 per pound (and other fruit with an even lower price point) into wine that sells for around $20 a bottle equals a much greater economic return to the farm. "The winery will definitely take over in gross sales."

"I would say that a lot of people want to do on-farm processing," says Limousin. "And it's being done in a small way, but they're more looking for processing type facilities because of the cost."

On-farm processing is not suitable for every crop, or every farmer, but it doesn't have to be prohibitively expensive, says Randy Thompson, a burly, radio DJ-turned farmer who produces a line of sauces and garlic salts on his 152-acre farm on the Fraser River just south of Quesnel.

"A lot of people have that 'Oh, a commercial kitchen, it's going to cost me a fortune,' [idea]. It doesn't have to."

Thompson's processing kitchen is relatively simple. Because of the nature of his product, stainless steel tables, a commercial fridge/freezer, a stockpot burner, sterilizing dishwasher, double sink, bottling equipment, food processor and dehydrator are all he really needs. "If I made things more complicated it would cost more."

Thompson says processing is "all about science." And he's very particular about the quality of his products, which is why he decided to build a commercial kitchen on his farm, Oddball Organics.

"I wanted it to be organic and there wasn't any organic processors that I knew of at the time that could keep the integrity of the product." The perfect balance of sweet and hot in his Nuclear Nectar sauce reflects the care that has gone into both growing the garlic -- 19 varieties producing 42,000 bulbs from half an acre last year in a tough growing season -- and processing that harvest into products he's proud to sell directly to his customers.