If you found yourself on the southern shore of False Creek at Westminster Avenue (now Main Street) on Saturday, Aug. 15, 1908, you would happen by opening day of Vancouver's City Market. The grand building with dual bell towers and a generous waterfront promenade is plastered with signs advertising retail and wholesale "farm products" for sale and a restaurant serving "meals at all hours." Rail tracks in the foreground illustrate the prime mode of transportation bringing food from the Fraser Valley to be sold at the market. The Mt. Pleasant marching band posing in full regalia is a testament to the community celebration accompanying opening day. 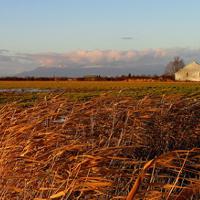 Could B.C.'s biggest city today bring back to life so vibrant a public space, building a key component in what could be one of North America's most robust local food economies?

Tara McDonald is one of a number of people working on just that vision. "There are parts of the food system, right in the centre of the value chain, between the producer and the consumer that need to be fixed," says McDonald, Vancouver Farmers' Markets executive director.

On one end, we have 20,000 mostly small and diverse farms. On the other, we have retailers, restaurants and individual consumers willing to purchase any and all locally produced food they can get their hands on. But unless the consumer (for these purposes "consumer" includes retailers and restaurateurs) is part of the small percentage of us with the time, knowledge and dedication to seek out individual farmers, finding local food can be a mysterious and uncertain quest.

In 2006 McDonald realized that the demand for local food was quickly outstripping supply. The success of the 100-Mile Diet experiment, the publication of Michael Pollan's hugely influential Omnivore's Dilemma and a handful of successful documentaries focused on the food system had made "local" the new "organic."

In very short order Vancouver's Farmers' Markets went from a one location, weekly community gathering running from May to October to a five-location, year-round economic powerhouse, pumping $10 million into the local economy last year, including $4.1 million in direct sales.

This rapid growth demonstrated the public's demand for local food and spurred the Farmers' Market Society to seek partnerships with other organizations to bring more local food into the city. "We couldn't do it on our own," says McDonald.

McDonald didn't have to search for long, finding willing partners already working to the same goals from other parts of the food system. In short order individuals, including myself, from the non-profit, business and academic communities formed Local Food First with the singular goal being to increase local food production and consumption in order to increase local ownership and control of our food system. The obvious first project was the development of a local food hub for Vancouver.

Food hubs are popping up all across North America to address multiple specific needs for the communities where they sit. The Stop in Toronto features a 3,000 square foot greenhouse, café and farmers' market; the food hub in Athens, Ohio facilitated the re-emergence of a local industry around the wild fruit pawpaw; and the newly proposed permanent farmers' market in the Comox Valley, situated along one of the most traveled thoroughfares in the region, will include wildlife interpretation to celebrate the unique trumpeter swan habitat that borders the property.

Which brings us back to that faded snapshot of City Market. In Vancouver, in recognition of the city's century old tradition, a local food hub is taking shape, and McDonald and others working on the project have a name for it: New City Market.

New City Market will fill the hole in the centre of our local food system by consolidating production and consolidating consumption. "It's going to be a place where multiple forms of direct marketing can happen," explains McDonald. "So, that's farmers' markets plus producer to buyer direct sales, and those buyers could be processors, retailers, restaurants or institutions." Although the design is unconfirmed, the focal point will be a central open space, accessible to farmers who will roll open one of the access doors, back their farm truck up to their stall and set up shop for the day. Around the periphery and on the second floor of the (hoped for) LEED Platinum certified facility, will be processing and teaching kitchens, temperature specific storage and office space.

Artist's rendition of the New City Market. Local Food hubs like this are popping up in cities across North America. Image by CityLab.

"If this facility is going to do its job right, it's going to meet the needs that exist between the producer and consumer or buyer," explains McDonald. "We shouldn't be creating any redundancies in the system." Right now the historical centre of Vancouver's produce industry is Malkin Avenue, also known as Produce Row. The distribution houses on Produce Row have, for almost a century, done a great job of keeping Vancouver, and all points east, fed. They have sourced and sold all that the global food system has to offer.

The main difference with New City Market is that it's the whole local food system in one building. Traditional produce distributors move cases of product from far off (and sometimes close to home if the volume is adequate) farmers to local end users. New City Market offers local farmers and processors access directly to their markets, which may include distributors on Produce Row. For those farmers that are looking for a better return for their crop, direct market access is the way to go.

Every community has its own specific food access issues. In Vancouver, it's perhaps obvious that the food needs of Kitsilano residents will be different than the needs of residents of the Downtown Eastside. Each community has a unique set of circumstances that is best dealt with at the neighbourhood scale.

"New City Market is half the equation: each of Vancouver's neighbourhoods requires the resources and infrastructure to become as food self-sufficient as possible," says Herb Barbolet. Neighbourhood food networks (NFNs), are the other half of a fully functioning, resilient food system for Vancouverites. These groups organize pocket markets (mini-farmers markets), community gardens, canning workshops, community kitchens and much more.

Currently there are five NFNs working in specific neighbourhoods in the city; Grandview Woodlands Food Connection, Trout Lake Cedar Cottage Food Security Network, Renfrew Collingwood Food Security Institute, Downtown East Side, Westside Food Security Collaboration. The City of Vancouver has recognized the success of these groups and hopes to replicate this success throughout every neighbourhood in the city.

When told of the idea of New City Market by McDonald, one of the farmers' market vendors, an Okanagan orchardist, repeated the idea back in her own words. "You mean that I could come down to the New City Market and in the morning when the farmers' market is on I can sell my produce directly to the consumer and then the next door, or prior to the market that morning, I could sell to some chefs and grocers and then whatever I don't sell I can sell off to processing for jams or whatever, and I can leave with an empty truck?" A farmer returning from market with an empty truck is a happy farmer.

The next big step in developing the project is securing a site. "We're really focusing on the False Creek Flats area," says McDonald. Along with the historical connection with the 1908 market, the area is centrally located, has easy cross-town access and, perhaps most importantly, it is underdeveloped. "The area is sort of the last frontier to be developed within proximity to the downtown core," explains McDonald. Although Local Food First has been approached by a number of interested land owners and developers, the most likely scenario will see the New City Market developed on City of Vancouver-owned land.

A key ingredient for a green city

Deputy city manager Sadhu Johnston says the New City Market will be "the crown jewel" of the local food system for Vancouver.

Stopping short of offering official City Hall support just yet, Johnston says the facility will support a number of goals in the city's Greenest City Action Plan. (The city hopes the successful implementation of the GCAP will make Vancouver the greenest city in the world by 2020.) "Over 25% of an individual's carbon footprint is related to food," he said when reached by phone from Chicago. He goes on to acknowledge that the city recognizes the strong need for an urban distribution centre for local food as well as an incubation centre for the development of value added products.

A consortium of foundations have stepped forward to fund the ongoing planning of the facility. The specific governance structure is still undetermined, but given the number of possible tenants and stakeholders, structuring as a new generation co-operative is the leading model. "While this is receiving tremendous amounts of support, it's still a business," says Local Food First steering team member and SFU associate Herb Barbolet. "It's not a popularity contest." Nine of the 10 "ingredients for a healthy local food economy" identified by the expert panel and the public at a recent Tyee-sponsored forum at the Museum of Vancouver will either be directly addressed or supported by the New City Market and its proposed functions. (Alas, the facility will not be able to rebuild the social safety net.)

"This will be a fabulous project and we're among the leaders in North America moving towards this," says Barbolet. "It's a critical component of a green city."