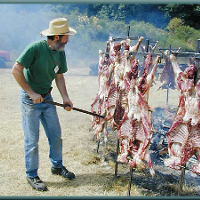 This simple truth sums up what may be the biggest hurdle for our local food system in feeding the masses. Until 30 years ago the Fraser Valley was home to a diverse food processing industry. Along with local dairies, meat packers and vegetable canners, the processing industry was a collective of branch plants for many ubiquitous supermarket brands. Kraft, Nabob and Lipton all had operations in the valley.

By the mid-'90s the consolidation of the food processing industry had hit full stride. Multinationals gobbled up local small- and mid-sized companies and centralized processing in super-plants strategically placed to take advantage of economies of scale, cheap inputs and cheap labour.

Despite the lost infrastructure, a certain breed of food entrepreneur prospered in the vacuum left by the big players. Catching a ride on the consumer wave that emerged from the organic and natural food movement, companies including Happy Planet Foods, Yves Veggie Cuisine, Nature's Path, Omega Nutrition and Left Coast Organics (at the time, Skeet & Ike's) were either founded or came of age in the later half of the '90s and early in the past decade.

But aside from some current research and development at Left Coast, none of these brands take advantage of B.C.'s bounty of raw materials. They are companies that were, and are, tied to this place culturally, but really, we're just lucky that their production facilities sprouted in our communities and provided jobs and other spin-off benefits.

There's no doubt that the potential payoff is huge. In 2005 (the latest year that statistics are available) B.C.'s 1,488 food and beverage processors generated $6.5 billion in revenue and employed 31,500 people. At the time this ranked food and beverage processing as the second largest industrial sector in the province, behind wood products. According to Dave Eto, president of the BC Food Processors Association, the economic winds have changed since then and "agriculture as a whole in British Columbia is now the largest manufacturing sector of all."

B.C.'s food and beverage processing sector is large as a group, but made up of a small and diverse group of players. While diversity is an advantage, it can also be a barrier -- manufacturers don't want to invest in new products only to find out there isn't enough market demand. Solution? The BC Food Processors Association is pushing for a local food technology centre to help test market demand, and potentially scale up, production of local food products. The association supports processors of all sizes from the micro, home-based operations to large scale factories. Along with working to help BC's meat industry navigate and thrive under the recent change to provincial meat inspection regulations the association offers an online marketplace to match job seekers with employers and a place to list business opportunities. ANd if you're looking for a specific product the association maintains an extensive list of all food processors in the province.

Like most of B.C's farms, most of our processors are small, with an employee base of five full-time equivalents or less. "Seventy per cent of all of our total 1,400 processors is that size," says Eto. "So, you have a lot of people who are very small in scale, very diverse and very eclectic. All of those elements that go along with having such high flexibility and diversity, more so than any other province in Canada."

If diversity is a key to success for small- and medium-scale farmers, it would make sense that the same principal is equally important to a processing industry that relies on those farms for raw materials.

"It brings a great opportunity, of course, when you talk about being able to source unique and different foodstuffs within different regions within the province, but the problem of course then is scale, right, because those companies have a difficult time moving up and exporting and serving larger markets," Eto points out.

Which begs the question, is it possible, or even desirable, to bring a local, processed product to market solely to supply the local market? Probably not. This approach may work for perishable staples like dairy, meat and eggs, but the average person can only eat so much jam, salad dressing and potato chips. With shelf staples like these, the obvious business case is to capture the largest market share, beyond any defined local boundary.

But with the current consumer shift towards local food, any product with a locally sourced ingredient list would presumably have an automatic market that would at least try the product once, says Walker. The hard part is getting these products out there in the first place.

Whether an entrepreneur is looking to create prepared salads from local ingredients to supply local hospitals, or attempting to exploit the Fraser Valley's overproduction of blueberries by making and marketing the next big international health food phenomenon, the lack of infrastructure puts up a brick wall.

When Left Coast Naturals saw a market gap and decided to produce a natural tortilla chip, the company had to go to California to find a facility with the equipment to make their Hippie Chip line of snacks. "The infrastructure just isn't here," explains Walker. This co-packer makes the chips to the specifications of Left Coast and ships them north to the company’s warehouse.

In the late '80s, when Arran Stephens of Nature's Path decided on organic breakfast cereal as his new venture he also had to go to California to get it made. After discovering that the co-packer who was making the cereal for him didn't take his insistence on organic certification seriously, and a confrontation on the floor of a natural food trade show, Stephens, along with his wife Ratana, decided they would build their own factory and manufacture the cereal themselves.

This gave them complete control over the quality of their product as well as a larger share of the profit. Stephens believes a relationship with a co-packer is useful while launching a product. "But I don't think that model works in the long run because you’ve got an extra cost in there," he explains. "And that is the profit of the co-packer."

Both Left Coast Naturals and Nature's Path were built from small operations into diversified companies. (A big part of Left Coast's business is as a distributor of natural and organic food brands.) The founders of both companies embody an entrepreneurial spirit that suggests they would have been successful whatever their venture. "It was mostly by gosh and by golly and by trial and error and finally we developed products that were better than anything else on the market," says Stephens.

While these types of success stories are inspiring, it's not enough to build an industry on spirit alone.

"Here's the problem," says Eto. "We don't have a lot of industry to support the growth of smaller businesses that need to find capacity somewhere."

Eto and his colleagues at B.C. Food Processors Association (BCFPA) have been lobbying to develop a food technology centre in the Lower Mainland to help bring products to market. He says B.C. is the only province without a centre and as a result we're missing an opportunity to build our local processing industry by exporting all of the R&D, product development and testing.

This industry-led initiative is only one of a number of similar, if smaller, efforts being proposed throughout the region. New City Market in Vancouver, River Market in New Westminster, a small-scale processing facility in Hope and a food business incubator based in the Downtown Eastside have all been floated as projects to build our local food system. "What's really great, that I'm finding, is that the industry is not being myopic," says Eto.

"They're saying, 'Hey, we need to have representation right across, because it strengthens our food industry as a whole,' and that's really what it's all about."