Every couple of months, for the past 10 years or so, I start feeling restless. The noise and chaos of the city intensifies in my brain to a point just shy of aneurism, I question the worth of whatever it is I'm working on and I develop a conspicuous facial twitch. My go-to stress relief in times like this is a recurring daydream I have about farming. This daydream generally has me frolicking in the fields all day, saying hello to the bluebirds and sunshine and feasting on nature's bounty that bursts aplenty from the earth with little to no effort. 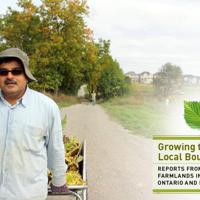 A Nursery For New Farmers

Daydream indeed. I've visited enough farmers on their farms to know that they rarely frolic, birds are to be shooed away from the new planting, and the bounty comes after a season of arduous toil.

Romantic notions aside, some research suggests that with the evolution of the global food system beyond peak oil a good number of us day-dreamers will need to snap out of it and actually get our hands dirty.

"The agriculture that we should bring about substantially is local scale, human intensive, ecologically sound," says Dr. Kent Mullinix from Kwantlen Polytechnic University. The director of Sustainable Agri-food Systems acknowledges that, "The fact of the matter is this post industrial agri-food system is going to require a lot of people, in particular a lot of farmers."

Mullinix references the work of Richard Heinburg from the Post Carbon Institute whose research suggests that the United States will need up to 50 million new farmers to work the land and feed the people in a post carbon world. That's roughly 17 per cent of the current population. Applying that number to British Columbia suggests that three quarters of a million of us will need to take up the hoe. At the moment, I'm feeling woefully unprepared.

Following the path to the farm

Chris Bodnar is the archetype of British Columbia's new generation of farmers. At 33, he's well below the average age of farmers in the country. He does not come from a farming background, is university educated and he sees farming as a political and social act; a practical way to extend the food security work he'd already been doing.

In 2007, Bodnar and his family paid heed to the pull of the soil and decided to head back to the land despite having no actual land to farm and zero experience. For most people this combination of barriers is enough to put any farming fantasy on hold indefinitely, but Bodnar's obstacle was more mental. "It was funny, at the time, the biggest thing that stood in my way was recognizing I didn't have to go into academics," he says.

"We're very satisfied with the choice we've made."

Nearing the completion of his PhD in communications, Bodnar became depressed by the thought of continuing in academics and entering "the race for tenure." After much soul-searching, a nudge or two from his wife and a reminder from some friends that he always said he was working on his PhD "for interest's sake" and not to launch an academic career he made the leap from the classroom to the field.

Within a week of publicly declaring his intention to become a farmer, at a FarmFolk/CityFolk meeting, Bodnar was being toured around the Fraser Valley and introduced to an organic farming community that would quickly accept him as one of their own in spite of his lack of farming experience.

In a testament to impeccable timing Bodnar and his family landed at Glen Valley Organic Farm, a cooperatively owned 50-acre slice of riverfront heaven, at the precise moment when retiring farmer John Switzer was looking for fresh blood to mentor to continue on his good work. Bodnar originally felt that he was too inexperienced to be able to offer much to the farm, but the community that owns and operates Glen Valley knew that the skills from the rest of his life were as important as knowing how to farm, which could be learned. (The joke around the farm being that every farm needs a PhD -- post-hole digger.)

"They were looking for someone who had a similar value set and a set of skills that contributed to the larger vision of what the farms purpose was," recalls Bodnar. The farm had found their farmer.

Workers the missing piece of a local food system

Bodnar's path to becoming a farmer is atypical, and while seemingly quick he had, perhaps unknowingly, been laying the groundwork to make the shift to the land for years. His eventual path was laid by his involvement with what he calls the "food scene" at FarmFolkCityFolk. (We're not talking the snooty crowd that noshes on "duos" of this and "jus de" that, but practical folks cultivating a just and sustainable local food system.) "If you're not part of an agricultural scene or a food scene it takes a while to get to know who's who and what's happening," he says. "I think the big thing is realizing that it's not an instant process." Luckily for any wannabe farmer in B.C. there are now myriad paths to the farm.

"The agriculture that we should bring about substantially is local scale, human intensive, ecologically sound," says Dr. Kent Mullinix from Kwantlen Polytechnic University. "The fact of the matter is this post industrial agri-food system is going to require a lot of people, in particular a lot of farmers."

Solution? Kwantlen's Richmond Farm School and other programs like it are training a new generation of farmers. The Richmond Farm School is currently accepting applications for a January start. Tuition for the entire program is $5,000, and they include a number of alternative arrangements. Recognizing that many new farmers will be venturing forth as couples they will enroll both halves of the couple as one. Classes can also be taken individually without enrolling in the entire program.

A generous, unsolicited, grant from VanCity has allowed the school to hire a full-time coordinator. For more information contact coordinator Anna Rallings.

Which is why he and his colleagues launched the Richmond Farm School. The school is part of a larger body of research to "actualize municipal enabled sustainable agriculture," that will develop a bio-regional food system.

And farming can be an economically viable choice, as Bodnar and other new farmers in B.C. and Ontario have learned, if it's scaled appropriately, and close enough to cities or suburbs that they can market directly to consumers.

While Bodnar still considers himself a new farmer, proof of the value of his unique skills that he didn’t consider useful to farming is evidenced by the fact that he now teaches the farm business planning and management class at the farm school. Mullinix asked Bodnar to teach the class shortly after accessing Glen Valley's financial records and stating, "I've never seen farmers keep books like this."

"It's not that I’m teaching it based on years and years of experience; it's just an aspect of the scene that clicked with me very quickly," explains Bodnar, happy to contribute to the overall success of the local food community.

Learning the business of farming

Nine students are currently finishing up the first year of classes, which includes all the land management, crop production and animal husbandry classes you would expect from any farm course, along with access to incubator farmland for up to three years that the city of Richmond has provided for the students to hone their craft. If they choose, students can also use the credit from the farm school courses to put towards a degree program at the university. Mullinix envisions similar farm schools in many municipalities in B.C.

Kwantlen's farm school is one of a handful of venues in B.C. where eager students can learn the ins and outs of what Mullinix repeatedly refers to as human-scale food systems. UBC's 8-month long Sowing Seeds sustainable agriculture practicum is entering its fourth year. Much like the Kwantlen program it's a mixture of practical classroom learning and hands-on experience. But both of these programs are following the path laid down by Linnaea Farm on Cortes Island where the Ecological Garden Programme has taught students "a thorough grounding in organic gardening and small-scale farming through a full growing season" since 1987. Bodnar also suggests neophyte farmers looking to take a path more akin to his journey check out the Canada wide apprenticeship opportunities listed by the Stewards of Irreplaceable Land (SOIL).

Bodnar acknowledges that the current wave of people interested in the farming lifestyle could be compared to the back-to-the-land movement of the '60s and '70s, but feels that today's converts are much more prepared. "There's a realistic understanding that farming is a business and you have to be able to support yourself," he says. "You're not just going to find a patch of land somewhere and set up shop and do subsistence farming." And although we're also just scratching the surface, those with the knowledge are recognizing the need to train new farmers so that they don't fail.