Bahauddin Baloch labours up a dusty dirt road with a wheelbarrow full of sunflower heads. He pulls the barrow behind him, past the bee hives, past the old barn and rows of corn, to the edge of the farm property, where he dumps its contents and then pauses to wipe the sweat from his brow with a handkerchief.

"We have a lot of finches around here, and they love to eat this," he says. You can hear the birds chirping away in the bushes nearby. At dusk, the finches will go to roost and the deer arrive. This farm, set on the Humber River, is a thoroughfare for the deer, and Baloch knows they love to stop and eat the vegetables he grows. He watches them each evening, his presence keeping them at bay, until night falls and he drives home.

The McVean farm is named for Alexander McVean, an early British settler who started growing wheat on the property 150 years ago. He was one of the first farmers in what is now Brampton, a sprawling city northwest of Toronto. Brampton is the 11th largest city in Canada, with one of the youngest and fastest-growing populations. The farm is a wild oasis in a landscape dominated by large warehouses (corporate giants like Loblaws and Zellers are headquartered here), four-lane industrial traffic corridors and large housing developments like the one right across the road from the farm. 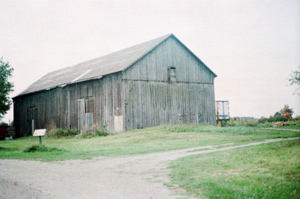 The only reason this property hasn't met the same fate is because it lies within the Claireville Conservation area, owned by the Toronto and Region Conservation Authority (TRCA). And while in some ways it is the last vestige of a dying era of agriculture, it also represents the beginning of a new one.

Incubator Farm a 'safe' place to learn and grow

In 2008, the TRCA leased the 37-acre property to FarmStart, an organization whose mandate is to support new farmers, to create the McVean Incubator Farm. The Incubator Farm program is a big piece of the work that FarmStart does (they have two others in the Guelph area). It's modeled after a program started in Vermont, and the premise is to help new farmers get established by giving them access to land, equipment and infrastructure at affordable prices.

Baloch is one of 17 small-scale farmers who lease land at McVean. The plots range from half an acre to 10 acres. Rent is $80 per acre, per year, and farmers also have to pay for water and to use a shared tractor. They have free use of basic farm implements like roto-tillers and shovels, and access to an irrigation system, washing facilities and refrigerated storage. There is a tent at the end of the farm's long laneway where they can sell produce, but most sell what they grow at farmers' markets in the city, and through Community Supported Agriculture (CSA) programs.

"The model of FarmStart is basically the best thing," says Baloch. "We have all the tools and machines available, and a network for farmers is available when we need it for guidance. The network makes a big difference." 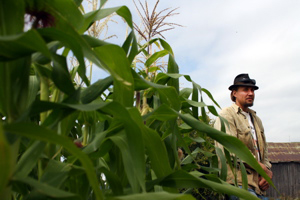 Saulis Tribinevicius is the farm manager. He's a tall, soft-spoken man who grew up on a hobby farm north of here and who has always worked in agriculture. Before he came to McVean, he worked at a commercial organic vegetable farm in Hamilton, where, over the years, he noticed more farmers going organic and switching to direct-sales marketing, either at farmers' markets or through Community Supported Agriculture (CSA) models.

"In a commercial setting, you have to perform," he says. "But here, we're trying to make it a safe environment to be able to make mistakes, because farmers are learning, so that there's not too much risk for them financially.

The McVean property is part of a larger conservation area owned by the TRCA. For a long time, the finches and the deer were the only occupants of this land. Then, in 2008, the TRCA adopted a policy document called Living City, which recognized the importance of what's known as near-urban, or peri-urban agriculture: "Near-urban agriculture supports not only healthy rivers and regional biodiversity through soil regeneration, ecological restoration and ecosystem integrity, but it is also a critical component of sustainable communities," it stated. 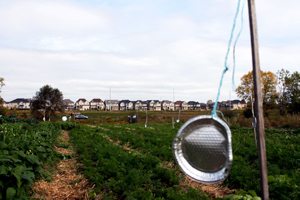 A pie plate tied to a wooden stake acts as a simple alarm system for prowling deer. In the distance is a new residential development to serve Brampton's fast-growing population. Photo: Justin Langille.

It was in this context that the TRCA partnered with FarmStart. Never before had it offered this kind of long-term lease, but it did so in recognition that tenure security was important if the farmers were going to invest and grow. In return, FarmStart agreed to abide by organic farming practices. Tribinevicius says they have not yet gone through the certification process, but next year each farm will be able to provide the records to do so.

Given this land, and the security to invest in it, the farmers at McVean are so far yielding good results.

Eric Rosenkrantz and his business partner Hanna Jacobs of Matchbox Garden and Seed Co. are some of those McVean farmers who are ready to graduate. The business is five years old, and provides seeds, produce and seedlings to Toronto markets, as well as to members of a CSA program. On a picnic table near their three-acre plot are soil samples from another property owned by a regional conservation authority. Rozenkrantz says they're in negotiations to move in next season.

One of the oft-repeated statistics about agriculture is that the average age of farmers is 52 and climbing. Who will replace them? The new generation isn't necessarily young people taking over the family farm, but rather university grads or second-careerists who want to break into the business. They're finding that small-scale farms close to urban markets are the way to go. But starting even a five-acre market farm is a big investment of time and resources. Finding affordable land in these near-urban areas is an even bigger challenge.

Solution? Incubator Farms. FarmStart is a Guelph, Ontario-based organization that supports new farmers through its incubator farm program. At McVean Incubator farm, farmers have access to small plots of land at affordable prices, shared infrastructure like irrigation and cold storage, equipment, and access to a network of experienced professional farmers.

"This is where we've developed our chops at growing food," he says. "We both have some farm experience, but neither of us are from a farming background per se. We figured, well, this is an up and coming industry."

Farming, an up and coming industry? Absolutely, says Rosenkrantz. The key is doing it small-scale, with few inputs, and having close access to urban markets.

Rosenkrantz and Jacobs use biodynamic gardening techniques to get the maximum yield from their few acres.

"There's a compounding growth in your yield if you companion plant well," he says. "We produce, at the height of the season, about two tonnes of food per week. When it's all said and done, by the end of October, we expect to make about $25,000 dollars per acre per year from this garden here."

Rosenkrantz admits that he's stopped looking at how much he's making an hour. It's useless, he says. "If I'm getting by, and this is working, then I'm happy. The business, I realize, can grow if my production methods improve and I get a bit more land."

Plus, he says, he's noticed that the price difference between what he sells at the market and what is sold at the grocery store has decreased over the past few years. 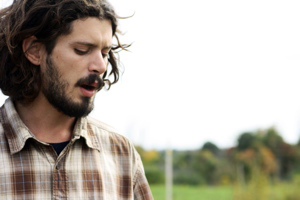 Baloch also abides by the small is better rule. He left a high-stress job in the IT world to try his hand at farming. Baloch started at McVean in 2008 with a half-acre of test crops. Last year was his first commercial year. He sells at three markets in Brampton and Toronto, and from one acre he made $20,000 gross sales. Although he stills relies on consulting work in the winter, his goal is to make his entire living from market gardening. He now has five acres, and by his calculation, with careful planning, planting and crop rotation, he can do it within two years.

"My target is that I gotta make one dollar per square foot of cultivated land," he says. "Farming can make money. You have to be small-scale, where you work for yourself, and use small to mid-sized machinery. And if you can lease it, instead of investing, that's the best solution."