Victoria city councillor John Luton made the trip to Whistler for the Union of British Columbia Municipalities conference the same way he makes most of his trips: by bicycle. It went well, he said, aside from some unplanned "sprint training" avoiding a bear on the Sea-to-Sky Highway. 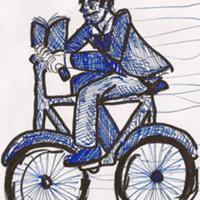 Bicycle Reading, from Some Big Rollers

Luton is one of several councillors across the province committed to cycling, not just for himself but for his community. But while bicycle politics have become central to discussions and plans in cities as diverse as Victoria, Vancouver and Prince George, advocates say the provincial government is yet to apply much muscle to the pedals.

Asked how much support local government's get from the province for projects to improve cycling infrastructure, Luton said, "Not a lot."

In Vancouver, where the council's bike decisions have been contentious, and where Mayor Gregor Robertson has said he himself logs 80 kilometres a week biking around town, cycling advocate councillor Geoff Meggs said the province needs to be engaged for help. "They're not saying 'no.' It's just they haven't been asked yet."

Prince George Mayor Dan Rogers campaigned hard on cycling issues when he won the top spot at city hall in 2008. He said that while the province could do more, he was excited by Premier Gordon Campbell's mention of cycling in his speech at the UBCM.

"We're going to provide for additional programs and additional funding for things like cycle paths and bicycle paths,” Campbell said in that speech. "As long as you're a community that looks at integrative zoning and trying to connect people with the places they need, and reduce their dependence on automobiles... Many of us can do that if we work together to do it."

"He didn't put a dollar figure to it," Rogers said. "One would hope that would be in next year's budget... I'm optimistic, but of course the proof is in the pudding when the detail is in."

It's hard to know exactly how much money the province is contributing to projects that support cycling, said Victoria's Luton.

There's a cycling infrastructure program that's budgetted at $2 million a year, but only spent $1.7 million last year. Some Local Motion money is used for cycling too, he said. "It's not necessarily bicycle projects. It can be."

The Gateway project includes some money to do things like include shoulders that can be used for cycling. "That's stuff that should be routine anyways," he said. "I see that as fluff around infrastructure for cars and trucks."

A few years ago Bike B.C. had $31 million a year to spend, he added. "The economic downturn happened and that program just disappeared."

Nor has Vancouver had much help, said Meggs. The gas tax, distributed via Translink, helps with projects on major roads, he said. The city's also tried to get money from ICBC, but so far without success, he said.

"The city's own investments are really just ours," he said, meaning they come from the city's usual sources of revenue: business and property taxes.

Rogers said Prince George has cobbled together funding through various sources. "We're like most, trying to find as many funding sources as we can," he said. "We've been fairly successful."

With Momentum editor Amy Walker and urbanist Erick Villagomez. Those are some talking heads! The Tyee co-sponsored event is Sunday, Oct. 24. Find out more here.

A spokesperson for the transportation and infrastructure ministry provided the global figure of $128 million that's been spent since 2001 for cycling infrastructure.

That includes $50 million spent through the Gateway project. There's also Building Canada funding of $14 million this year, which is matched by the federal government and goes to things like widening highways and improving shoulders for cyclists.

It also includes Bike B.C., the only provincial fund dedicated to cycling, which has a $3 million budget this year.

While projects to encourage cycling are relatively cheap compared to other infrastructure, $3 million won't go far.

In Prince George, Mayor Rogers said he figures another $7.5 million is needed by 2015 to complete the city's "non-motorized transportation infrastructure” system. Prince George already has 100 kilometres of dedicated cycling trails, but is finding the demand for more is high, especially with the growing University of Northern B.C.

"We're only about half way to where we think we need to be," he said.

Victoria has a cycling master plan that dates back to 1995. Luton said that at current funding levels it will take another 20 years to complete.

One project to create a 17-kilometre commuter trail on the E & N railway right-of-way will cost $25 million by the time it's done.

The region had $11.3 million from gas tax money for it, which funding advocates (including Luton, who then was not yet a councillor) a few years ago had to fight with B.C. Transit for a share of. "We had to push back at that and say there's more than one shade of green."

Other projects have received federal funding and gas tax money. "Bike infrastructure is relatively cheap but it's a big chunk for small municipalities and even Victoria," said Luton. He uses the word "scrambling" to describe the search for assistance. "You do what you can when you find partnership dollars."

The province has so far not been a full partner on these projects, he said. "The lip service is there, but it seems to be an easy one to cut when times are tough." Luton also mentioned he is trying to organize a bicycle caucus as part of the UBCM to advocate on these issues.

The province is "very committed to looking at alternative ways for people to move around their communities," Minister Bond told The Tyee. Every time a road or a bridge is worked on in the province it now includes improving it for cycling, she said.

There is also $500,000 for cycling infrastructure in the budget, she said, adding there were many applications to receive part of that money.

"We've been wildly oversubscribed," she said. "We're going to be hard pressed to meet the demands across the province."

If you ask mayors and councils, she argued, they also want more money for all kinds of things, including more buses and rapid transit. "People want more of everything," she said. "We're involved in the largest expansion in history and we still have more to do."

She said the province will continue to invest in cycling and she liked how Campbell's UBCM speech tied cycling infrastructure to healthy communities, which may create more funding options. "I know Kevin Falcon as the current health minister and past transportation minister is very interested.”

Funding cycling can reduce health care costs, said Luton. It also gets people out of cars, eases congestion and frees parking spaces, he said. "It's not just a benefit for cyclists, but for everybody in the community."

There's also a role for the province to play in developing education programs and setting standards, Meggs said. "Most of the really frustrating questions that bother motorists about cycling infrastructure are questions that need to be addressed at the provincial level."

The city put a motion forward to the UBCM which was passed at the Whistler convention. It called on the province to create a B.C. Cycling Development Program that would include cyclist and driver education programs, a guide for local governments wanting to encourage cycling, and enough funding to double the number of cyclists using the roads by 2020.

"I think Victoria has some catching up to do," said Meggs. "At this point Victoria hasn't got there."