Standing in an experimental poplar forest at the University of British Columbia's Totem Field test farm, the future of biofuel grows all around botanist Carl Douglas. 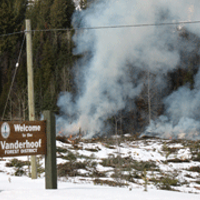 The 500 trees in this artificial grove are the progeny of just 20 parent black cottonwoods (also known as poplars) gathered from all over western North America by the B.C. Ministry of Forests more than a decade ago, for use in their pulp and paper plantation breeding programs.

But today, Douglas is finding new ways to work with the same old poplars. Armed with novel genomic tools, the Washington-born botany professor sees a future where trees are bred into the ideal feedstock for biofuel production -- fast-growing, cellulose-dense plantations created using traditional breeding techniques to fuel the demand for ethanol from non-food sources (see sidebar).

"It's probably 10 to 15 years before one will see a large-scale planting of optimized genotypes [traits for biofuel] on the landscape," says Douglas, who was part of an international team that sequenced the poplar genome in 2006 -- a first for a tree species. "Within a year, breeders could start incorporating the information we're generating here in their breeding programs."

Responding to the need for new biofuels

Douglas says wood is the ideal feedstock for a future ethanol industry in B.C: most of the province is forested, beetle-killed pine abounds, and fast-growing native black cottonwoods are already grown in plantations across their coastal B.C. range.

The immediate challenge is the high cost of producing ethanol from trees, compared to corn and wheat -- it is expensive to separate the cellulose (the part you want) from the lignin which gives wood its rigidity. Douglas' solution is to make it easier (and cheaper) to extract the fermentable sugars from the wood by breeding poplars to grow faster in high rotation plantations, denser in volume, and with more cellulose and less lignin.

The demand for such non-food sources of ethanol is being spurred by concerns about agricultural lands being displaced to produce fuel, and revelations that the environmental benefits of ethanol from corn have been overstated.

"Renewable fuel standards" are also stimulating demand: enacted by many governments around the world, such standards require that a certain percentage of biofuel must be blended with gasoline and diesel. In British Columbia, for instance, the BC Bioenergy Strategy of 2008 called for a provincial average of five per cent renewable content in gasoline by the end of 2010; diesel too must be blended with increasing quantities of biodiesel, up to five percent by 2012. The strategy also stated that B.C. biofuel production must meet 50 per cent or more of the province's renewable fuel requirements by 2020 -- but there are no legal teeth to ensure this latter target is met.

Ethanol is liquid alcohol created by fermenting converted starch or sugars found in certain plant-based materials, including grains, agricultural residue and trees. Fuel-grade ethanol is distilled and blended with gasoline -- most production-line cars use up to a 10 per cent concentration. Regular diesel vehicles can also burn certain proportions of processed animal and plant oils as "biodiesel," which can be blended with petroleum diesel.
The benefits of a 10 per cent ethanol blend in gasoline:
- Increases the combustion efficiency of the fuel;
- Reduces the amount of fossil fuel needed to drive;
-Reduces carbon monoxide emissions by 25-30 per cent;
-Reduces net carbon dioxide emissions by 6-10 per cent.
(Both above stats (CO and CO2 percentages) from the Canadian Renewable Fuels Association http://www.sentex.net/~crfa/ethaques.html)

Policy changes in the U.S. will also ramp up the supply of non-food sourced ethanol: the U.S. Environmental Protection Agency has increased the amount of renewables required in transportation fuel from 34 billion litres in 2008 to 136 billion in 2022. By that futuristic date, only 40 per cent of that ethanol can come from corn. Companies in B.C. and around the world are responding by developing new technologies to derive ethanol from non-food biomass, such as agricultural waste (for example, corn cobs instead of corn), consumer food waste, and trees. In B.C., this means there is a new shine on using up what is left of the beetle-killed lodge pole pine in the interior, and closer to Douglas' interest, growing poplar plantations optimized to meet future demand.

What is Dr. Douglas doing?

Poplars and other commercially-valuable trees have been cross-bred for decades to optimize certain traits, using the same methods historically employed by agricultural plant breeders (note that this is not the same as "genetic modification"). Parents are selected for certain traits and then crossed with each other; among the many progeny of this cross, trees with the desired traits (fast growth rate, wood quality, disease resistance) are selected in field trials for further evaluation. Eventually a small number of the best are selected for planting.

But the successful genomic sequencing of a single black cottonwood tree taken from the banks of Washington State's Nisqually River in 2006 -- which for the first time located and identified all 45,000 genes across its 19 chromosomes -- has created new tools for Douglas to work with.

Using the information from that single poplar genome, it is now much cheaper and faster to sequence genomes of other poplar individuals. At Totem Field, Douglas is doing just that, "resequencing" the genes that are actively involved in wood formation for each of the 20 individuals represented in his test forest, comparing them both to the original Nisqually genome and to each other. He is then able to identify the "gene variants" (also called "genotypes") in this population of trees at Totem Field that underlie the traits needed for optimal biofuel production.

"You can use these genetic markers in breeding and use that info to increase the value of the tree," he says.

The knowledge unleashed from the genome breakthrough has also made it easier to genetically modify poplars for biofuel production and a range of other uses (disease-resistant transgenic poplars are already grown in plantations in China today), but Douglas says this technology is not coming to B.C. any time soon.

"It seems unlikely to me that there's going to be public acceptance of large-scale transgenic tree plantations."

The use of B.C. trees as an ethanol feedstock took a leap forward in June, when Burnaby-based ethanol maker Lignol signed a deal with Danish enzyme manufacturer Novozymes to pioneer an ethanol-making process using wood and forestry waste. The companies say they will aim to produce ethanol from wood for $2/gallon -- a price competitive with gasoline and corn ethanol. Lignol did not return calls from The Tyee.

During the same month, major investment bank UBS mentioned Novozymes by name, as one of the biggest potential beneficiaries of the coming adoption and commercialization of second-generation biofuels. Other beneficiaries, they predict, will be the agricultural sector and big forestry companies like Weyerhaeuser.

For forest companies in B.C. and the Pacific northwest generally, biofuel is a promising potential revenue-stream at a time when a lot of traditional markets have dried up. Take the example of the aforementioned Weyerhaeuser, which has formed a joint venture with Chevron (called Catchlight Energy), which will see the forestry giant deliver feedstocks to Chevron, which in turn possesses the required capacity in product engineering, fuel manufacturing and distribution.

"There is a growing recognition by the [forest] industry that they've got to rely on more than one or two revenue streams to keep them going," says Michael Weedon, executive director of the BC Bioenergy Network. "They've got to look at this bioenergy piece as something that gives them some stability."

But it is still early days for so-called "second generation" biofuels. For the time being, most of the global ethanol supply -- nearly 74 billion litres produced in 2009 -- was made from corn, sugarcane, and wheat. This said, three large-scale "non-food" source production plants are expected to come into production this year in different corners of the world, and sustained high oil prices will only bring more.

"I don't think it will take 15 to 20 years [for wood to be a predominant feedstock], because energy pricing is already at a certain level now," says Weedon. "You start to have an energy revolution at anywhere above $100 a barrel of oil, and I'm a believer it will be higher than that in the not-too-distant future."