The Ford SUV is suspended on a hoist in Jay Giraud's East Vancouver research facility, waiting to have its gas-guzzling core pulled out -- the first step on the road to becoming a battery-powered, 100 per cent electric truck. 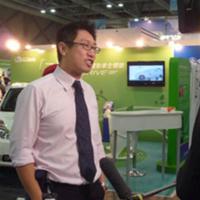 "The engine, transmission, and gas tank are no longer necessary," says Giraud, the boyish founder and CEO of Rapid Electric Vehicles Inc. (REV) peeking his head out from under the chassis of his latest conversion.

By the time Giraud and his team are finished, all vestiges of the SUV's dirty oil past will be replaced by a modular electric drive system and transmission; from that point on, there will be no more gasoline emissions, and virtually no replacement parts or serious maintenance required.

Just two years in existence, REV is not waiting for big automakers or early-adopting consumers to bring the electric car revolution. Instead, they are focused on converting the estimated 68 million (mostly) gas-powered passenger fleet vehicles currently spewing millions of tonnes of greenhouse gases on roads across North America. The SUV on the hoist will be part of REV's first wave of electric conversions, built to order for a utility fleet in Burlington Ontario.

"With fleets, we can really throw a lot of [electric] vehicles into a space and create a real tipping point for that region using pure electric solutions," says the 34-year-old Giraud, who in a past life toured the world as a professional snowboarder before discovering clean tech in the mid-2000s. "We think that this is the future of automotive electrification."

REV produces modular "plug and play" drive systems -- meaning that the company prefabricates, builds, assembles and ships the drive system to the customer. An automotive technician at the fleet garage does not need to understand the complexities of the system: he removes the gas-dependent parts and drops in the new built-to-fit components.

Government and private-sector passenger fleets are ideal early adopters of 100 per cent electric vehicles: fleet vehicles are parked for at least 16 hours a day at a central location, making charging a snap; they drive consistent patterns, usually no more than 40 km a day; and, they repeat these same patterns over a very long life. They are also responsible for greenhouse gas emissions of mammoth proportions.

Looking beyond drive systems for the fleet market, REV is focused on addressing how societies of the future will transition from fuelling cars at gas stations to charging batteries at night. REV drive systems are designed with what Giraud calls "two-way grid capability" -- meaning the electrical grid can wirelessly communicate with the battery of a plugged in REV e-vehicle, allowing the utility to draw energy off the idle battery if it needs to.

"Everyone is looking at how utilities can manage all the energy consumed by a house, but nobody is working on making cars smart," says Giraud. "For 16 hours a day utilities could use very small amounts of energy from parked [electric] cars, and have gigawatts that they produced earlier."

Jay Giraud proved himself equal parts showman and entrepreneur last year, when he appeared on the Canadian Broadcasting Corporation's hit show Dragon's Den -- where entrepreneurs pitch business ideas to a panel of high-powered venture capitalists. Usually a crusty lot, the "Dragons" were so impressed with REV's business plan, they offered Giraud $250,000 for a 50 per cent ownership stake in the company. He said no.

A preferable fundraising approach has been to partner with BC-based GreenAngel Energy Corp., an "angel fund" that specializes in raising start-up capital for early-stage green tech companies. In February 2010, GreenAngel and REV announced an agreement to raise $5 million for the fledgling company this year.

Under the terms of that deal, B.C. investors will receive a 30 per cent refundable tax credit and be allowed to hold their shares within an RRSP or Tax Free Savings Account for further tax deductions. The GreenAngel partnership takes advantage of the B.C. government's tax credit program established in 2008 as part of the province's attempts to expand the cluster of companies and experts working in B.C. clean technology.

This tax credit program complements other incentives now available to some start-ups in B.C.: companies developing "prescribed clean technology" won't pay B.C. corporate income tax on taxable income earned outside the province (up to $75 million per year) effective this September, and qualifying clean tech specialists new to Canada will not pay B.C. income tax for five years after their arrival.

Such incentives pale in comparison to those of Ontario, California and Michigan, which are determined to attract the best green tech talent and companies in the world. But B.C. remains an attractive location for other reasons.

"There's no business advantage to being here, but B.C. offers lifestyle," says Randy Holmquist, owner of Canadian Electric Vehicles Ltd., which has been building specialty electric vehicles for airports all over the world for 20 years. "I could be way more profitable in Los Angeles... but I want to live here."

What has made it possible for REV to exist in British Columbia is the large pool of technical expertise, particularly in Greater Vancouver. Three decades as a centre for the design, development and manufacture of hydrogen fuel cells has ensured that there is plenty of talent to draw on.

"Vancouver is making this neat transition from fuel cell to electric, and there's a lot of battery specialists and chemical energy storage specialists," says Giraud, noting that a fuel cell car is an electric vehicle, so there is a lot of knowledge cross-over from hydrogen to pure electric.

With the talent pool has developed "clusters" of electric vehicle and associated technology companies: battery experts like Vancouver's Advanced Lithium Power, Delaware Power Systems Corp. (Richmond), and Delta Q Technologies Corp. (Burnaby), all of which rely on B.C.'s core of electrical engineering expertise. Canadian Electric Vehicles is a pioneer that continues to operate near Parksville on Vancouver Island, while Future Vehicle Technologies designs and produces its own innovative vehicles in Maple Ridge. Azure Dynamics -- perhaps B.C.'s biggest success story -- moved its headquarters to Detroit in 2007 to be closer to suppliers and U.S. customers, although much of its research and development still occurs in Vancouver. (Azure and Ford launched the Transit e-vehicle in February, which is being marketed to the e-fleet market.)

It will be these small, visionary companies, says John Stonier, spokesman for the Vancouver Electric Vehicle Association, that drive electric vehicles into being.

"There is an opportunity for the small start-ups like REV, because they can specialize in very specific technology applications, and fill in the holes the large companies just can't do themselves," he says. "[Start-ups] have limited resources, but they can use those resources much more effectively to get things done."