Though pop culture credits Thomas Edison with inventing the light bulb, in reality, it had been around for decades by the time he got his hands on it. Edison and his lab took it to the next level by creating a safe, practical and affordable system in which to put those bulbs in people's homes. His real contribution to society was the first electrical transmission grid, which, in 1882, provided nighttime lighting for a few dozen customers in lower Manhattan. 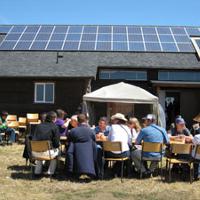 Over the next century, transmission grids across North America grew to criss-cross the continent, until just about everyone was able to flip on a switch and have power and not have to think much about where it came from. Aside from getting bigger, this grid hasn't fundamentally changed much in the past century: meter readers still have to walk from house to house to bill customers, utilities often don't know about outages until someone calls it in.

But now, utilities and governments are rolling out smart grid technologies, the first wave in a virtual sea change of how we use and think about electricity.

Imagine a world in which you could switch off an oven with your cell phone while sitting on the Skytrain. Where washing machines run off electric vehicles plugged in at night. Where homes become not just consumers, but also producers of electricity, able to meet peak demands without bringing expensive new power projects online. All possible, with a smart grid.

Smart grid is really blanket term that covers many aspects of the modernization of the existing grid. These include highly technical aspects of monitoring and managing transmission and distribution components (for more, see this Carnegie Mellon paper) as well as advanced metering systems -- or smart meters -- that measure electricity use at its final destination.

The fundamental difference between a smart grid and a regular grid is that it turns our existing one-way electricity delivery system into a two-way system, one that communicates real-time information to utilities from points across the entire grid.

"The core of the smart grid is this: Can we put a layer of intelligence on a built-up environment where electricity is the primary source of energy?" asks Hassan Farhangi, director of the Group for Advanced Information Technology (GAIT) at the BC Institute of Technology.

The answer is yes.

GAIT is helping create the Intelligent Micro Grid on BCIT's Burnaby campus. Farhangi calls it a "skeleton" grid at this point -- a kind of blank slate for testing all kinds of smart grid technologies.

Now in the second year of the six-year project, they've installed smart meters at seven campus buildings and created a 'central control' station, where computers collect information from the smart meters (via power lines or wireless networks) and then spit it out in a way that the average homeowner would understand. (Like how much electricity they used when they came home and turned everything on, and how much it cost them.)

Central control can also talk, via the smart meter, to appliances in the buildings; it can turn the air conditioning down, for example. And the smart meters can even communicate with each other -- in fact, BCIT recently held a contest in which building residents compared electricity usage, and competed to be the most frugal. Faranghi recalls walking by the residences, seeing students studying with flashlights.

"Within two weeks, we were able to reduce electricity consumption by 20 per cent," he says. "It was amazing, absolutely wonderful."

This two-way communication is what, in effect, makes a grid smart, explains Farhangi.

With the regular grid, "we do not have any information whatsoever as to how much load do we have on our distribution network, what's the rate at which the consumption is moving, what are the areas that requires more feed and different type of distribution.

"Simply due to that absence of information," says Farhangi, "we have, over the past 100 years, over-engineered the system."

This has led to redundancies and waste. The grid is built for peak demand, but that demand isn't always there. During those times BC Hydro runs turbines at its hydroelectric dams backwards, dumping water back into the reservoir and introducing 20 to 25 per cent wastage on the system, says Farhangi.

"I believe the legacy of our existing electrical grid will basically evolve into a network of integrated, distributed micro grids," he says. "The old system is hierarchical. We need an evolutionary approach."

With more funding, and a small, nearby source of clean electricity and heat, the BCIT's Intelligent Grid could become an "island" -- completely independent of the main grid. Farhangi sees this as the model for other dense and urban areas.

Especially since the "layer of intelligence" that makes up a smart grid can be built on existing infrastructure. If there's a power outage, for example, and the transmission line is outfitted with sensors and networked communications capabilities, the utility would instantly know where and how to fix it. It even opens up the potential for self-healing software that could fix the problem without human intervention.

"You're going to have increased reliability, security, flexibility. You're going to be able to integrate renewable energy a lot easier. You'll have a more efficient system -- not just consumer energy efficiency, but grid efficiency," explains Katherine Hamilton, president of the Washington D.C.-based GridWise alliance.

GridWise is an industry advocacy group. Its goal is to "try to create market incentives for smart grids that allow everybody to participate, whether you're a large company or a small company."

"We think there's room for everybody in this because it is sort of a brand new technology area that we think is ripe for innovation," says Hamilton.

"It allows our state regulators to see projects being put in place that are 50-50 cost shared so that the state isn't putting the entire onus on their own customers," Hamilton says. "That cost-share with the federal government limits the risk and it's going to really prove out all these different technologies. We think that's a huge piece of it."

How Tantalus of Burnaby is wiring rural US

Burnaby-based Tantalus Systems Corp. is one company taking advantage of this boom in the U.S. Most of its clients are publicly owned utilities in rural regions of the southern states. Tantalus provides complete systems: smart meters, sensor devices in transmission and distribution gear, and the wireless communications network.

Rob Lauridsen-Hoegh, manager of marketing and communications, says rural utilities were early adopters of their technology because of its practical applications. For example, customers at the very end of a distribution line can often experience spikes in power, which can blow appliances and fry computers.

"Tantalus is able to go in and in a matter of a day or a couple hours, remotely measure the power quality so the utility can make the necessary adjustments. That's a time-save and prevents the utility from getting sued or having to pay a customer for appliances that were lost," he says.

Theft detection is another obvious example. "We can measure how much power is going into a neighborhood and how much is being used. You can determine that some place within a range of houses is pulling power illegally off the grid," says Lauridsen-Hoegh. "One of our customers was able to find out several hundred thousands dollars worth of theft. That used to be hit or miss whether a utility was able to do it."

Tantalus currently has no clients in B.C., and Lauridsen-Hoegh says only about 10 per cent of utilities across North America have deployed advanced metering systems. "But the industry is forecast for double-digit growth in the foreseeable future," he says. "I think B.C. is in a great position now because the technology has matured, benefits are proven, and people understand that changes to the way we use and manage energy are needed."

Social engineering is in fact a key component. You can't have a smart grid without a smart meter, and the information that a smart meter provides is useless unless customers know how to use it. In effect, the days of mindlessly turning on a light switch -- or any other appliance -- are gone.

"Right now, most people don't see energy as a commodity. They don't know how much it costs, they don't know what it's worth," Hamilton says. "They just get a bill at the end of the month, but they don't exactly know what they did to get it to that level."

Next week, a closer look at how smart metering programs are being rolled out and three BC companies working on this technology here.