Among the most counter-intuitive components of Vancouver's affordable housing conundrum is this: High housing prices have pushed hundreds of millions of dollars of ready money on to the sidelines. 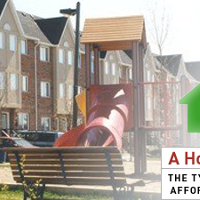 Homes that Cost Less than Rental

Just ask any real estate broker what happens when she or he lists a condo for $275,000. Ask a mortgage broker how many prequalified clients are hunting for a $275,000 unit. Or consider the StatsCan data: There are literally tens of thousands of Lower Mainland households capable of purchasing a $275,000 home.

Throughout most of North America, $275,000 is more than enough to buy a family home. But not in Vancouver. Here, that'll get you a quarter of a house, or a bit more than half of a small condo.

And since there's no way to buy half a home, all of that money -- hundreds of millions of private dollars that could be funding the construction of affordable housing -- sits on the sidelines.

But what if there were a way to buy half a home? How might that change the equation?

That was among the most intriguing questions debated by The Tyee's Reinventing Co-Ops panel.

The overwhelming majority of would-be homebuyers locked out of the Vancouver real estate market share a common history: Most of them grew up in homes their parents owned, and many watched their parents retire on the wealth accumulated as a result of that home ownership.

Tim Pringle, of the Real Estate Foundation of B.C., observed that this shared history -- compounded by the real estate boom of the double-O decade -- has led to unrealistic expectations among many would-be homebuyers.

"One of the challenges about housing is the expectation of creating wealth," Pringle said. "That's been one of the problems for co-ops. The implied social contract is not clear, and it's led to delusions about what co-ops are about."

Tyee editor David Beers added: "Given the market today, and the lack of workplace pensions... people are looking at housing as a way to build up equity."

"But they don't," interjected Darren Kitchen, of the provincial co-op federation.

"I think the mentality around here -- and I'd say it's probably true of where I live in Ottawa, where the market is also fairly robust --- is that it's a psychological thing as well. If you're not in the ownership bus, if you're not in the housing equity game, you're not on the right playing field."

Kitchen and Gazzard both observed that if an individual had put his money in other safe investments, he'd have done just as well as owning real estate.

"We did an analysis of a stabilization fund. Our actuary looked at the post-World War II housing market in Canada," Gazzard said. "You can't tell the difference between the consumer price index [CPI] and the average housing prices in Canada overall."

"But that's not what people think," Gazzard admitted. "We have to cope with that."

Half a home: shared equity

"Maybe what we're looking at is a hybrid model between the two," Gazzard continued. "You get your security and you get some equity, though not the full equity return. In exchange for that you get access to the market."

As an example, Gazzard suggested a model that was talked out in the United Kingdom.

"It arose from a problem of scarcity of housing for key workers in London. So we're talking probably about the kind of demographic that you're talking about. Not very highly paid people, but not poor people either," he said.

"The idea was that the national government would buy and own the land, and buy and own a portion of the common area to the point where the gap would be closed between, say, $500,000 all-in costs and the $300,000 or so that a family might be able to afford," he continued.

"That was going to be a shared equity co-op. The model was developed by a leading co-op guy in London. For some reason it never went anywhere," Gazzard said.

Cameron Gray, a longtime director of the city's Housing Centre, was among several to sharpen the idea.

"You could layer that kind of partnership," Gray said. "Let's say the city would come in as a land owner or partial landowner, and another level of government would come as the holder of the remaining piece of the equity that's needed to bridge the gap between the roughly $500,000 it costs to build a new family apartment and the $300,000 or whatever such can afford."

Jim O'Dea of Terra Housing provided examples of local projects that had already adopted some of these ideas.

Most of the group agreed that such a shared-equity model would work best if the homeowner purchases more than half the value of the unit, and if such purchasers were required to live in the unit they own.

The objective of such requirements would be to prevent investors from purchasing and "flipping" shared-equity homes, which would harm not only the affordability but also the sense of community within such a project.

Gray also suggested some sort of an income test, such as that required to qualify for the low-income units in a federally funded co-op.

"I don't know," Gazzard replied. "It'll be self-income testing to some extent. The people who want 100 per cent ownership and can afford, they will go elsewhere. The people who can't, won't."

Gray suggested that while that would work in most markets, the Vancouver market is hampered by the high numbers of part-time residents seeking pied a terres.

"The issue about income testing comes in to play when people who may have a chalet in Whistler or a home on Salt Spring Island want a nice place in Vancouver, but don't want to pay too much for it," Gray said.

All agreed that some sort of residency requirement would be necessary.

A Tyee staff reporter asked if there were some other way to ensure that such housing remained available to working families such as "teachers, firemen, police officers and journalists who really need to live in the city in which they work."

"Now I see what today's all about!" quipped Gazzard.

How to prevent flipping?

The Reinventing Co-Ops group spent a considerable amount of time debating various strategies to balance the interests of individual homeowners (who seek equity gains) with the group interest of maintaining affordability over time.

The group debated several existing strategies. They tended to fall into one of three groups. Cameron Gray summarized them this way.

Dollar-in, dollar-out. "There is no equity gain on these projects," Gray explained. "You get your equity by paying off the mortgage. That's how most people make their equity on a house in a normal real estate market. It's not by capital gain; it's by paying off your mortgage. And then you have a mortgage-free house -- which is really what you're looking for, when you get old and have a reduced income."

CPI-capped equity. "This is the Whistler model," Gray said. In addition to paying off their mortgages, homeowners in the Whistler Housing project also reap market gains. But those gains are capped at the rate of the consumer price index. "This ensures both that the community gains affordability over time, and that people are sort of held whole in the sense their equity keeps going up with CPI."

Market minus margin. "Then there's the model, which you see all over the place, where owners can sell at some fixed percentage below market," Gray said. Among the examples cited, the most common margin was 20 per cent below market.

"Under this system, in a market like Vancouver, affordability starts to erode pretty quickly," Grey said. He described a small Kitsalano project that was pegged to 50 per cent below market.

"There, it's priced itself out of that market," Gray noted. "These were originally affordable households. In today's markets they're not. So we've lost the affordability piece because the value of housing has gone up so much, where the income levels have not gone up nearly as much."

Several members of the group suggested that the Whistler-style, CPI-capped model would likely prove to be the most workable for a share equity project.

How best to manage the common equity?

All agreed that any such residency or resale restrictions would only be as effective as the organization that manages them. Throughout the day, the topic of discussion circled back to a key question: What sort of an entity would be best prepared to manage the common equity not held by individual unit holders?

Put another way: If you owned 60 per cent of your home, who would you trust to own the other 40 per cent?

It was observed that this has been a stumbling block upon which the idea of shared ownership has tripped for several decades.

"The model in the U.K. never got far enough where that residual ownership piece was decided, but I think the idea would have been a publicly held trust, controlled by the government," Gazzard said.

After considerable discussion, it was agreed that there are several legal ways that such a shared equity project could be structured. Pros and cons of each approach were debated.

Gazzard noted that the co-op model would give residents more control over flipping or pied a terre ownership.

"Having a co-op gives you more flexibility to chose who's going to come into the co-op than if you were simply selling a condo," he said.

Thom Armstrong, who directs the Co-Op Housing Federation of B.C., noted that the structure becomes more important over time.

"The challenge doesn't end when you close the deal and move in," Armstrong said. "The additional challenge -- assuming you're talking about more than one residential unit -- how do you govern and manage that piece once it's built?"

"In a strata, you walk down the hall and you don't know your neighbor, right?" Gray said.

"I think that [a co-op component] would sort of add some kind of sort of community-building dimension to this, as opposed to just being stratas where people are buying just because they only have $300,000 and they want to live in the city."