Vancouver is among the least affordable housing markets in the world, according to a report by the Frontier Centre for Public Policy. 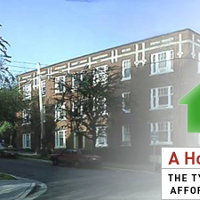 That hardly comes as news to Vancouver families trapped between rents they can barely afford and the increasingly unobtainable dream of home ownership.

What appears to have been forgotten among the near-daily headlines about systematic renovictions and spiraling house prices is that for much of the last century, a third form of housing tenure frequently filled the gap between ownership and rental.

It's called co-operative housing. More than 90,000 such homes were developed during the mid-20th century. But outside of Quebec, almost none are being built today.

As part of an ongoing exploration of affordable housing alternatives, The Tyee and The Tyee Solutions Society invited a panel of co-op housing experts to discuss the question: Could co-op housing be reinvented for the 21st century?

Over the next few days, The Tyee will present some of the intriguing ideas that emerged from that wide-ranging discussion. But first, here's an overview of the problem, how co-ops work, and an introduction to our panel of experts.

Here are the facts leading to the inescapable conclusion that there is no longer any corner of Vancouver where a working-class family can afford a home.

A median Vancouver household earns about $64,000 a year, according to Statistics Canada. A typical bank will loan that working family somewhere in the range of $260,000 toward the purchase of a primary residence.

A detached bungalow on the West Side costs an average of $1.15 million, according to a 2010 survey by Royal LePage. That's more than four times what a median working family can afford.

A West Side condo costs $725,000, according to the survey. That's almost three times what a working family can afford.

A detached home on the East Side costs $674,000. That's more than twice what a family can afford.

And an East Side condo costs $402,000, or about one and a half times what a family can afford.

Put another way, a typical Vancouver family would have to save $140,000 in order to make a down payment on an entry-level home.

Since few working families are capable of saving that kind of cash, most remain trapped in the rental market. And with so few households exiting the rental market over the past few years, Vancouver rents have begun to skyrocket -- especially for multi-bedroom homes. An average three-bedroom apartment in the West End now fetches $2,589 a month, according to a recent Canadian Mortgage and Housing Corp survey.

Co-ops once filled the gap

Until about two decades ago, co-operative housing filled much of the gap between home ownership and rental.  A housing co-operative -- or "co-op" -- is a multi-unit property owned by its residents. But unlike a condominium, where owners hold stratified titles to individual units, co-op residents are shareholders in a legal entity that owns the building. The shareholders are called members, and the holding company is called a co-operative association. Each member also holds occupancy rights to a specific suite.

There are several types of co-operative associations.

Limited equity co-ops have rules that limit share prices in an attempt to maintain affordability. Limited equity co-ops offer most of the privileges of ownership -- including the monthly savings realized once the mortgage is repaid -- but not the right to make capital gains in a rising market.

No-equity co-ops provide some of the privileges of ownership -- such as secure tenure and protection against market-driven rental increases -- but function more like rental apartments. There is a very low purchase price -- comparable to a rental security deposit -- and a monthly fee paid in lieu of rent.

Federal and provincial governments encouraged the construction of limited equity and no-equity co-ops throughout the 1970s and 1980s via an evolving series of funding programs.

The legacy of those programs remains: there are 91,890 units in 2,221 co-operative associations across the nation, according to the Co-operative Housing Federation of Canada. British Columbia is home to 14,698 units in 264 co-operatives.

Much of that financial support was contingent on the provision of some units (often between 15 and 20 per cent) to low-income residents. As a result, most co-ops are mixed-income communities. At the same time, these requirements also led many Canadians to confuse co-ops with social housing.

Could co-ops be reinvented?

Federal and provincial (except in Quebec) support for co-ops died in the 1990s, and most developers turned their attentions to the increasingly lucrative condo market. The co-op federation estimates that outside of Quebec, no more than 300 new co-op units have been created in the past decade.

As part of its ongoing exploration of affordable housing options, The Tyee and its sister organization, the Tyee Solutions Society, convened a daylong discussion among nine co-op experts. The participants included:

Cameron Gray, recently retired as managing director of the Department of Social Development at the City of Vancouver;

Catherine Porter, president of the board of directors of the Co-op Housing Federation of B.C.;

Tim Pringle, director of special projects for the Real Estate Foundation of B.C.; and

The Tyee asked the group a relatively simple question: Could co-operative housing be reinvented for the 21st century?

There was no simple answer, of course, but the wide-ranging discussion produced several intriguing ideas.

Over the next few days, we'll present three of those ideas: The invention of a shared-equity ownership model, the reallocation of existing government funding, and the reconstitution of hundreds of tiny co-operatives into larger associations.

'The payback is downstream'

Here's what a few of the panelists had to say about the current state of co-op housing.

Darren Kitchen described the role co-ops have played this way:

"I think co-ops are important because I think there's a real lack of choice in terms of housing tenure that people can access. Not everyone can afford -- most people can't afford -- a condominium or single family home, and renting is inherently insecure and not prone to building any kind of stability in people's lives," Kitchen said.

"And I think, between those two extremes, a model that provides ownership, responsibility, community and vitally, security of tenure, is an important piece in ensuring people have access to a variety of choices of tenure rather than the two that we seem to have been stuck in for the past 20 years," Kitchen added.

"This was seen as affordable home ownership. Even though it was a rental model -- no equity -- it was seen as a home ownership structure in the sense that once the mortgage was paid off the members benefited from it just like anyone with a house," Gray said.

"I think the biggest problem that co-ops have always had -- and sometimes the press is to blame for this, by the way -- is that most people don't understand the community concept. They don't understand the difference between equity co-ops and non-profit co-ops... they mash them all together," O'Dea said.

"People don't understand the mix of populations, mix of economic conditions," O'Dea continued. "When I moved into a co-op back in 1980, I got on the front page of the Vancouver Sun. They questioned why should I be in a co-op because I was a high-income earner."

Thom Armstrong made a case that the cultural advantages were as valuable as the economic incentives.

"I think co-ops are important to talk about because it's a rare intersection between individual empowerment and collective equity. And there's not a lot of opportunities to experience that intersection in a way that builds the kind of communities that you can build with housing co-ops. But I also think they can be the catalyst for other forms of cooperation and community economic development. And that's something that as a movement perhaps we haven't explored as fully as we could have," Armstrong said.

And Nicholas Gazzard, who flew from Ottawa to join the discussion, was among the first to point a finger toward government.

"The reason we haven't seen housing co-ops develop in the last, say 15 years, isn't because they're culturally passé, but because the economic and policy environment hasn't favored their development as part of an affordable housing strategy," Gazzard said.

"It's been much easier for government to simply go to non-profit providers and developers and say, 'Here's some money, bring some assets to the table up-front.' That's what we're looking for, easy, simple, out of the box. Co-ops are not that simple. The payback is downstream, not upfront."