Ron Chung considers himself to be the ideal electric vehicle driver. He makes short, urban trips. He'd remember to plug it in every night. And, he points out, "the savings from my car's fuel bill will nicely augment my beer budget." 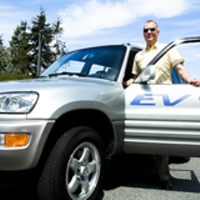 And he drives the talk. He's taking the technical know-how he developed in Canada and using it to help the world's most populous nation plug into what he calls "the electric car renaissance."

As a business strategist for CLP Power, the largest energy company in Hong Kong, Chung is working on a trial of EV charging stations in parking lots around Hong Kong -- part of a larger strategy to get infrastructure in place and build public awareness so that, as these vehicles become cost-competitive with conventional, people will feel comfortable making the switch.

Despite his professed love of good food and fine ales, Chung is a trim, energetic 40-year-old with a broad smile and a propensity to punctuate his words with gestures. The Manitoba-born, Vancouver-raised son of a Chinese immigrant was in his early teens when widespread adoption of electric vehicles first seemed like a real possibility. He remembers the hype -- and then the fizzle. Perhaps had things worked out differently, his first car could have been a plug-in.

Chung is certain that one day, some day within the next two or three years, he will be able to afford one. While electric vehicles (EVs) are still roughly twice as expensive as comparable gasoline-powered vehicles, manufacturers in the U.K., the U.S. and Asia have received government stimulus packages to improve vehicle design and revamp plants for mass EV production. Nissan, with help from an $8 billion U.S. government stimulus package, aims to produce 100,000 EVs a year by the end of 2010 -- the Leaf will be the first mass-produced, all-electric vehicle sold in North America. Other mainstream automakers are following suit. BMW says it will produce an electric model by 2013, and the Chevy Volt is being heralded as the 'new face' of GM.

"I think we are hitting that tipping point in terms of the technology and the price," says Chung. "It's not if people will start buying electric vehicles, but when."

Here for an Olympic visit

Chung, who is back in the city he loves for a brief visit during the Olympics, agreed to an interview about his work in this sector and its future in both Hong Kong and Vancouver. We meet at the Oakridge mall food court -- not far from the home where he grew up and where his parents still live -- and pick a table far from the grind of the Starbucks espresso machine and close to a glass-paned entrance. The conversation begins with the obligatory confirmation that yes, the weather has been supremely beautiful of late. It's a special treat for Chung.

"I come back here to Vancouver two or three times a year and I just suck up the air," he says, taking in a deep breath through his nostrils. "It's so nice and people just don't realize that until they travel elsewhere."

Chung has lived in Hong Kong since 1993, when he graduated from the University of British Columbia. With few job prospects at home and a burning curiosity to travel around Asia, he moved there to take a job with the Hong Kong and China Gas Company. In 2002, he was hired by CLP, Hong Kong's largest energy utility. A few years ago, he recalls, he was offered an opportunity to work on an electric vehicle initiative. Memories, good and bad, from building an electric car in his final year at UBC came flooding back. Chung quickly raised his hand to take up the project.

Although it hasn't set any targets, the Chinese government wants to turn their country into the largest producer of electric vehicles driven by domestic demand. The government has committed nearly $1.5 billion to industry innovation, and has plans to provide $8,800 subsidies for EV purchases by taxi fleets and government agencies.

Air pollution is one of the biggest drivers. "In Hong Kong, when you cross a major street, you often see people covering their mouth," says Chung. There are only about half a million registered vehicles in Hong Kong, a metropolis of nearly seven million people. Like Chung, most get around on the city's excellent transportation system. But given the number of buses, mini-buses, taxis, and delivery vehicles that service this crowded, dense urban environment, there is massive congestion and bad roadside pollution.

"So one way we're trying to push electric vehicles is, climate change, yeah, but even closer to home: the air outside your window."

Build the network, they will plug in

Early this month, CLP launched a three-year trial of EV charging stations at 21 parking lots around the city, where drivers can charge up while they're shopping or buying groceries.

"The analogy I'd like to use is, if you build a mobile phone network, you're not going to wait for subscribers to build out your reception," Chung says. "That's to entice your subscribers, and that's why in Hong Kong, you see that, even though we don't have a lot of electric cars, we're actually building it out, at an optimum level.

"One thing we've seen and learned from other cities is, don't get caught up in the chicken and egg problem. Which is, do you build infrastructure first or wait for the cars? Don't let that stop you in Vancouver."

The City of Vancouver is taking steps to becoming electric-car friendly, requiring dedicated electric plug-in outlets in all new single-family homes and off-street bike storage rooms, and charging infrastructure for 20 per cent of all parking stalls in new condo buildings. Council has also approved a plan to provide plug-in stalls at Easy Park lots around the city.

The first three of Mitsubishi's new i MiEV to come to North America landed in Vancouver last spring. The city is leasing one, and BC Hydro is leasing two. Although the car isn't part of the city's regular fleet (due to ICBC's concerns around promoting right-hand drive vehicles), it is used for demonstration purposes, and had made the rounds during the Olympics.

Chung says this kind of visibility is important to promote electric vehicles -- people are more inclined to do something if they see others doing it. "And the charging stations that we've put in, we've actually made a very nice job of painting up the parking spots, with green and flowers, really highlighting it." It not only makes them easier to find, but it's also effective advertising, explains Chung. Some of the businesses that CLP has partnered with are even donating dedicated plug-in stalls so that EV drivers can also park for free.

This is something he thinks could work well in Vancouver. "I'm a carrot guy," says Chung, referring to the carrot-and-stick approach to encouraging uptake of new technologies. "I've noticed in the last couple of years... quite a change in terms of the money for parking. One thing I would probably do is give incentives for people by saying, 'If you have an electric car, you can park for free.'"

Which, if Vancouver were to adopt such a policy, would be a good thing for this would-be EV driver who wants to move back to the city some day. As the interview draws to a close, Chung checks his watch; it's almost time to pick up the parents for lunch. He's spending as much time with the family as possible before he flies back to China.

The energy of the city, the convenience of being a few hours away from so many wonderful cultures and countries in Asia -- these are the things he loves about Hong Kong. But Vancouver, he says "will always be home."