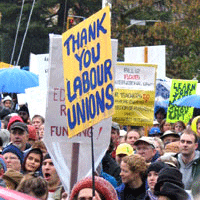 What Happened to Labour Rights?

On May 18, 1935, 250 young men stormed the Carnegie Library in Vancouver's downtown core and politely asked the staff to leave. The contingent then set up headquarters in the museum on the third floor, waving and yelling through the windows to the thousands of supporters gathering below. The occupation was the culmination of a slew of protests by workers striking against the country's unemployment relief camps, which began under prime minister R. W. Bennett in the early thirties. All told, it was siege of the milder sorts. The occupation lasted a mere eight hours, ending after the city offered a bit of cash to each of the men and promised not to press charges.

What Happened to Labour Rights?

At 2 p.m. today, May 18, 2010, staff and friends of Vancouver's Carnegie Centre will commemorate the 75th anniversary of the occupation of the Carnegie.

Located at the corner of Main St. and Hastings St., the old library now serves as a community centre and is often called the living room of the Downtown Eastside.

Despite its anticlimactic resolution, many remember the library takeover as the impetus for the 'On to Ottawa' trek. Hundreds of strikers boarded railway freight cars en route to the capital with plans to force the federal government to shut down relief work camps.

Upon arrival in Regina, they were stopped by RCMP armed with revolvers, gas grenades, spare batons and handcuffs. Despite the abrupt end to the trek, the workers' demands were heard, and the camps were shut down by the new Liberal government elected later that year.

"That the workers chose the Carnegie as the rallying point for this important protest is significant," wrote University of Alberta professor Ann Curry, in an essay about the building.

"Although tattered with age and suffering from neglect, the Grand Old Sandstone Lady was a still public building that symbolized pride and justice, and the perfect platform from which to launch a political protest."

The Tyee thanks Ann Curry, Mark Leier, and the On to Ottawa Historical Society for their help assembling this article.