On Sept. 25, 2009, two hours out of Kitimat in the Douglas Channel, the freighter Petersfield suffered complete gyroscopic failure, lost steering, took a turn to starboard and struck a rocky outcrop across from Grant Point. The 26 crew members suffered no injuries and the 187-metre freighter was able to extricate itself from the rocks and return to Kitimat. Despite extensive damage to the bulbous bow, no cargo was lost. 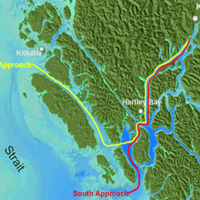 Oiling up the Coast

The proposed Enbridge Northern Gateway would transport oil from the Alberta tar sands to Kitimat via a 1,170-kilometre pipeline. At the proposed new, state-of-the-art Kitimat port facility, the oil would be transferred to double-hulled super-tankers and shipped out of the Douglas Channel. The proposal calls for a second pipeline to be built along the same route to transport condensate (a.k.a. diluent) from Kitimat to Alberta for use in the tar sands.

Opponents of the twinned pipeline and the resulting increase in west-coast tanker traffic say the risk of a spill along British Columbia's pristine coast is too great.

Representatives of the Enbridge Gateway Pipeline project have heard these concerns and continue to stand firm. Despite the waves of opposition, Steven Greenaway, Enbridge vice-president of public and government affairs, has stated, "If we did not believe that the movement of petroleum goods could be done safely, either in a pipeline or by vessel, we would not have proposed the project." Enbridge has a detailed and professionally developed Marine Safety Plan which states that through a combination of double-hulled tankers and high marine standards (including escort tugs and third-party tanker inspections), risks will be mitigated. The marine plan also calls for a massive investment to improve the first-response capability along our coast.

After the Exxon Valdez disaster in March 1989 (and the lesser known, larger spills off of the United Kingdom of the Braer, 1993, and the Sea Empress, 1996), there was an outcry for double hulls on ships to decrease the risk of cargo being released into the environment. Most felt the double-sided and double-bottomed carriers would mean no more spills.

But some assert it is too soon to tell how safe double-hulled tankers really are. Metallurgical engineer Dave Shannon has spent many hours researching the science behind the construction and chemistry of tankers. Shannon points out that the built-in features of a double hull cause them to corrode up to three times faster than the old single hulls they replace. The corrosion chemistry with double hulls is unique, complicated and, he fears, "...with sub-standard maintenance, a chemistry experiment just waiting to explode."

Groups such as Douglas Channel Watch fear that opening up the north coast to 'Very Large Crude Carriers' (VLCCs) up to 350 metres long and 60 metres wide, even if they are modern and double-hulled, creates a very high likelihood of a tragic oil spill occurring. Those who are concerned are not placated by Enbridge's reassurances.

Can super-tugs save the day?

Enbridge's Steven Greenaway is very aware of the recent Petersfield incident, but points out that the Petersfield was not using an escort tug. Enbridge's marine plan intends that all vessels be tethered to powerful state-of-the-art super-tugs ("tractor tugs") that would, in the event of a malfunction or emergency, be able to maintain control and safety of the tanker. In addition, all crude carriers docking and departing would be helped by harbour tugs. The VLCCs would be tethered all the way to open water at the end of Douglas Channel.

Activists say that the use of tugboats will not eliminate the risks inherent in moving oil along the coastline. Gerald Amos, of Kitimat's Haisla First Nation, says, "Enbridge touts that the tankers would be tethered to tugs out to open water. Anyone with experience on this coast knows that the Douglas Channel is the safest part of the tanker route. Regardless of this fact, we have had two major shipping incidents in recent years."

Amos also points out what most Douglas Channel mariners know all too well: the channel's steep-sided shoreline causes a funnelling of wind (increasing wind speed), extreme seas and unpredictable weather changes. Amos believes the Douglas Channel and the open water beyond comprise one of the most dangerous coastlines in the world. "With the 100-knot winds and 100-foot waves, compounded with myriad reefs and rock-piles, [this] is the area where a spill would be most likely, and most devastating."

There are those still concerned that loss of steering, combined with extreme weather and rough seas, would render escort tugs useless. Enbridge disagrees, pointing out that the super-tugs are not the typical log-booming type, with some capable of steering and braking up to 320,000 pounds.

It may surprise some readers that there are already petrochemicals being shipped along our coast and up the Douglas Channel to Kitimat. Rio Tinto Alcan imports solid coal-tar pitch for its Kitimat aluminum smelter. Methanex, also in Kitimat, acts as a receiver for large ships containing condensate, which is shipped to Alberta by rail.

Enbridge believes that should its project go ahead it would be increasing the safety of our coastline by investing more than $100 million on improving the first-response capability.

The proposed Northern Gateway terminal would include a 24-hours-a-day, seven-days-a-week control centre, state-of-the-art radar station, much-needed first-response equipment and personnel, storage tanks and a pump station. Should a spill occur, Enbridge would be prepared with a local response agency based in Kitimat and along the Douglas Channel to respond immediately.

Greenaway knows that residents are concerned that they would end up paying for any spill that might occur. He addresses this by saying that there are several layers of funding that would be available. "These include the ship-owner's insurance, the Canada Ship Source Fund, the International Oil Pollution Fund and the Supplemental International Oil Pollution Fund, which Canada is expected to sign on to in the near future. Combined, these funds are valued at more than $1.4 billion."

Money not the answer: citizens

Gerald Amos and other concerned citizens say that it's common knowledge there are no effective means to clean up large coastal oil spills. "In the face of this reality," says Amos, "Enbridge continues to state that because of their project, hundreds of millions will be spent to increase oil-spill response capacity, and as a result of this they say the coast would be safer if this project goes ahead. This is akin to saying that there are lots of cancer clinics to care for people who smoke, so more people should just go ahead and smoke."

Kitimat is an industrial town, its economy centred on Rio Tinto Alcan. The jobs generated by access to ocean fishing and recreation provide diversity and are critical to the economic health of the community. Kitimat resident Margaret Ouwenhand worries her community has a lot to lose. "If there is a catastrophic spill, the commercial and recreational fisheries will be lost."

Flip the coin, take your chances

A web-based counter-campaign, "the other side of the coin," was launched by Enbridge "so both sides of the coin can get examined." Enbridge is presenting the message that it has done the research and feels confident that tankers can navigate the Douglas Channel safely. Enbridge believes its high standards and tanker regulations, coupled with much-needed improvements in first-response capabilities, make its project a safe bet.

Both sides remain firm: tankers, no tankers -- a flip of the coin with high stakes riding on the outcome.