Earlier this year, the provincial government quietly downgraded the expectation for economic activity to be generated by the 2010 Winter Olympic and Paralympic Games in Vancouver and Whistler by $6.7 billion. 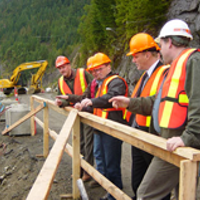 Olympics Spending a Shot in the Arm for British Columbia

The government was using the number $10.7 billion as the estimated economic activity hosting the Olympics would produce. Now it prefers to say it will be $4 billion.

But even that amount is based on a best case scenario mapped seven years ago by a consulting company, and real tourism revenues in recent years fall well short of that projection.

The government's decision to drop its projection from $10.7 billion to $4 billion was explained in an email obtained by The Tyee as part of the response to a freedom of information request.

"The 2010 Olympic and Paralympic Winter Games are expected to generate up to $10.7 billion in economic activity," said one version Peters quoted from the government website. "This translates to up to 244,000 person-years of employment."

The other version, however, shrunk that prediction by over 60 percent: "The 2010 Olympic and Paralympic Winter Games are expected to generate up to $4 billion in economic activity."

The amount of economic activity the Vancouver and Whistler Games will generate has been one of the central questions since it was first proposed, along with the question of what the Games will actually cost taxpayers in Vancouver, British Columbia and Canada.

Keep in mind that reporters looking at the full cost of hosting the Games have come up with a figure somewhere between $6 billion and $7 billion.

Asked Peters, "What is the bullet you are currently working with?"

'Use the $4-billion figure': official

Dickson responded to Peters in an email a few minutes later. "Please use the $4 billion figure," he wrote. "$10.7 billion included the convention centre and we're not going there right now."

It is unclear from the exchange why government officials chose to remove the Vancouver Convention and Exhibition Centre from the calculation, though it's worth noting the project hit $883 million by the April, 2009, opening, nearly double the original budget. And there's the question of whether it was fair to count the convention centre in the benefits from the Games even while politicians refused to include it while calculating the costs.

Despite the quiet reassessment of the impact of the Games, finance minister Colin Hansen continued to quote the much larger $10-billion figure in his public statements.

"The total economic impact, once the games are done, has been projected by independent sources to be as much as $10 billion," Hansen said on Feb. 17 as part of his budget speech as recorded in Hansard.

And he stuck to the $10-billion figure when reporters questioned him in March on how the recession would affect the projection.

Today, the YourBC website spells the economic activity details out more clearly, though it still uses the dated figures: "Overall, 2010 related spending represents $4 billion in economic benefits . . . When you include the convention centre expansion, the resulting economic activity climbs to $10.7 billion."

Both the $4-billion and $10-billion figures the government continues to quote come from a 2002 report by InterVISTAS Consulting Inc.

New Democratic Party finance critic Bruce Ralston dismisses the InterVISTAS report as wide in scope and dated. The province has more recent reports on the impacts of the Games that they've so far refused to release, he said, including a $2 million study by PriceWaterhouseCoopers.

VANOC is also withholding a study by University of British Columbia professors Bob Sparks and Rob VanWynsberghe that was to look at the economic, environmental and social impacts of the Games and was to be released in June.

The minister of state responsible for the Olympic secretariat, Mary McNeil, was travelling with the torch relay and unavailable.

During estimates debate on Oct. 21 she said PriceWaterhouseCoopers has prepared four reports looking at the impact of the Games between 2003 and 2008. One of them will look at the actual benefits compared to what was predicted in the InterVISTAS report, she said. Although she said they would be released the following week, they were not.

The provincial and federal governments are negotiating a release date, expected to be within the next two weeks, a spokesperson for the ministry said.

There is reason to believe the InterVISTAS report, at least the parts the politicians quote, may be more positive for the government than the reports they are keeping under wraps.

The report set out four scenarios. The $4.2 billion boost to the province's Gross Domestic Product, arrived at after subtracting the convention centre from the mix, was only going to happen in the most optimistic "high visits scenario."

If the "high visits" scenario were to be achieved, the report said, B.C. should see "higher volumes of visitors to British Columbia for at least two years prior and five years after the Games."

In the midst of the global recession, however, the most recent tourism figures for B.C. show steep declines in international visitors.

According to Tourism B.C.'s October, 2009, tables, based on Statistics Canada data, year-to-date visits were down significantly in August from a year earlier.

Finance minister Hansen said the Olympics are still going to be a bright spot in the B.C. economy in the coming years. Economists at financial institutions and bond rating agencies are positive about the impact the Olympics will have, he said.

It has been a tough time for updating economic predictions, he said. "We could have done an update of the economic forecast 16 months ago which two months later would have been out of date. The world has changed a lot in the last 14 months."

The InterVISTAS consultants, by the way, recognized that the estimates for the economic impact of the Games would shift as time passed and more was known. As part of their work they gave the government the model they would need to "easily" update their figures.

"InterVISTAS Consulting Inc. provided the British Columbia Trade and Investment Office with a new version of the economic impact model," the report noted. "The new model can easily be updated to estimate the economic impact of the 2010 Winter Olympic and Paralympic Games as additional new information becomes available."

If the trade and investment office has ever used that model, the minister responsible, Iain Black, said he's unaware. "I don't have anything resembling an update beyond what we already know," said Black, the minister of small business, technology and economic development.

There will be about $4 billion in economic activity around the Games, representing some 24,000 jobs, he said.

Asked about the discrepancy with Hansen's $10-billion figure, he said, "This is one of the challenges you get into when you're analyzing this. Where do you put the goalposts around what is direct and what is indirectly involved with the Olympic Games?"

He added, "We've witnessed that kind of arithmetic gymnastics on the cost side of the Olympics as well . . . It really depends on who's writing the article or who's doing the analysis. There's a lot of philosophy that creeps into that long after the math's done."

The government is proud of the work on the Games, he said. "There's very little going on that we're not anxious to crow about," he said. "Every time we get a crack at this, the meetings that I'm involved in anyway, the excitement and the optimism around the results, it grows, it does not diminish, so it's nothing we're afraid of talking about and nothing that we're afraid of digging into."

The coming reports will be likely be more good news, he said. "My suspicion is it will only be to the good."