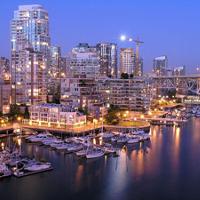 Does the world perceive laid-back Vancouver as a slacker haven where bronzed beach bums idly soak up the sun and breathe fresh mountain air? Mayor Gregor Robertson seems to think so, and with the Olympics a scant four and a half months away, he wants it to change.

"Let's face it," Robertson told a packed Board of Trade luncheon at the posh Fairmont Hotel Vancouver. "Vancouver sometimes suffers from the perception that we're all laid back, chillin' out on the West Coast, we play harder than we work, and the heavy lifting gets done elsewhere."

The mayor used his speech Wednesday afternoon to outline an ambitious strategy to re-brand the city in the lead-up to the 2010 Games. "Vancouver Green Capital" is the result of months of consultations. It's an "aggressive" attempt to re-imagine our rain-soaked metropolis as a global leader in the burgeoning clean-tech economy.

"This is truly a once-in-a-lifetime opportunity in the world spotlight," the mayor said, "and we must capture the moment."

'Let's kick it into gear'

Robertson, who co-founded Happy Planet juice before he became mayor, is no stranger to West Coast vibes. He said there's lots to enjoy about Vancouver's laid back pace, its easy living. But the world is coming in February 2010. The city needs a serious image makeover if it's going create a lasting legacy from the Games.

"I'm here today to say let's kick into gear," he said emphatically to a receptive audience in crisp business wear.

Step one: Robertson unveiled a new city business brand featuring six green and blue lines intersected in the shape of a V.*

Step two: play up the city's green credentials. "Vancouver is already an emerging hotspot for the green economy," the mayor said, citing local firms such as Nexterra, which works on lo-cost heat and power solutions.

Step three: attract green businesses to Metro Vancouver. The city's economic development commission will outline a comprehensive plan in November. Meanwhile, Vancouver will begin collaborating with municipalities across the Lower Mainland. And Robertson has been talking with U.S. cities in the Pacific Northwest and California to create "low carbon economic development zones" -- areas where coordinated government incentives spur green business.

"Better late than never," said Lance Berelowitz, editor of Vancouver's Olympics bid book, when he heard about the plan.

For years, the acclaimed urban thinker has argued strongly for a strategy to maximize benefits from the 2010 Games. Until today, he'd seen little evidence Vancouver has made that a priority. The world's eyes bug out with astonishment at its spectacular vista of sea and sky. And it'd be fair to say that most outside opinion of Vancouver focuses on its most laid-back attributes -- and not much else, Berelowitz said.

"Now that the city's woken up and advanced this new agenda, that's for the good," he said. "As long as it's backed up with real content, then it's fantastic."

Yet convincing the world our eco-friendly claims have substance may be a problem, said Simon Fraser University marketing professor Lindsay Meredith.

"Exactly how bloody green are we here?" he said. "We don't have a mass transit system that's all that impressive, we basically still rely a lot on cars, which could lead some people to say, 'Hello? Green? Really?'"

In our current global recession, eco-friendly demands such as strict regulations on fossil fuel emissions could scare some investors away. After all, most companies are looking for economic advantages to fight a sagging bottom line, Meredith argued.

"Are you going to pull a lot of investors into Vancouver based on being green? My hunch is no," he said.

Mayor Robertson would disagree, of course. He wants to show the world a different side of Vancouver. A city where minds expand not just from soaring mountains and potent weed, but the possibilities our unique brand of West Coast sustainability offers the globe.

But changing the world's perceptions is no easy task.

"The people that come to visit Vancouver that I know, they don't want to see totem poles or anything like that, really," said celebrated local writer Douglas Coupland in a 2001 interview with January magazine. "They'll say: Oh, I've heard all about nude beaches, what's the deal? Or pot or... And some of these very elegant men and women would want to go right to the hash bars and stuff."