The trial of Senator Mike Duffy featured several notable revelations last week about the inner workings of the Prime Minister's Office. One of the most important was found in a 2013 memo written by former chief of staff Nigel Wright that focuses on the control exerted by the PMO over the Senate. While the Senate is nominally an independent body of "sober second thought," the memo highlights how the PMO expects Senate leadership to follow directions from the prime minister and to avoid developing policy positions without advance consultations and approval. 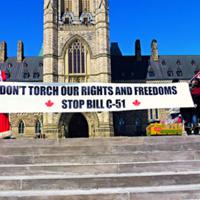 Kill C-51 or Risk a Fractured Base, Right-wingers Tell Tories

For anyone who has followed Senate committee reviews of legislative proposals, the Wright memo is not particularly surprising. This past spring, a Senate committee review of Bill C-51, the controversial anti-terrorism legislation, heard from experts such as the Privacy Commissioner of Canada about much-needed reforms. Yet once it was time to vote, the committee left the bill unchanged, lending an air of theatre to the entire process.

Assuming that policy control over Senate committee remains a priority, a recent batch of Senate reports provides new insights into future Conservative policies. Weeks before the election call, Senate committees began releasing long-awaited reports on a wide range of issues including national security, digital commerce and the future of the CBC. In fact, more Senate committee reports were released in June and July (15 in total) than in the previous 18 months combined.

The Senate Committee on National Security and Defence led the way with two reports on increased border measures and new anti-terror measures. The border measures report has significant privacy implications as the committee recommends a massive expansion in the collection and sharing of biometric information. This includes requiring all entrants to Canada that require a visa to provide biometric information (such as fingerprints), to retain the data for 15 years, and to share it with countries such as the United States. The report acknowledges the privacy implications of the policy, but offers few specific protections other than appropriate oversight.

The committee also released a report on anti-terrorism measures that extend far beyond Bill C-51. The report recommends examining training and certification of imams in Canada along with increased screening and information sharing practices. The extensive report featuring 25 recommendations for further action could serve as a blueprint for the next round of anti-terror strategies.

The policy reforms are not limited to national security. The Senate Committee on Banking, Trade and Commerce released a report in June on the regulation of digital currencies such as bitcoin. While the committee emphasized a "light touch" for regulation, a closer read of the report reveals that it supports several new legal initiatives. These include creating licensing requirements for digital currency exchanges that are used to buy and sell "crypto-currencies" and working with other countries to develop global guidelines on the use and regulation of digital currencies.

The Senate Committee on Transport and Communications released one of the most criticized reports which examined the future of the CBC. The report was regarded by many as disappointing since it failed to grapple with some of the systemic problems faced by the public broadcaster. However, it does point to several potential reforms that would affect the CBC's governance, funding and mandate. These include changes to the CBC board, the sale of CBC real estate, discontinuing in-house production of non-news and current affairs programming, and emphasizing amateur sports.

Most of the new Senate reports have attracted little public attention, particularly with their release over the summer months. Given what we have learned about the close link between the Prime Minister's Office and Senate leadership, however, the reports deserve closer scrutiny since they provide a likely outline of future Canadian policy reforms should the Conservatives win re-election in October.