The House of Commons committee charged with studying Bill C-51, the anti-terrorism legislation, wrapped up last week. Given the government's effort to fast track the bill with limited dissent, the committee unsurprisingly rejected more than 100 amendments from the opposition parties. 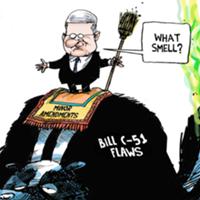 Will Changes to C-51 Give Spy Agency Power to Detain?

The government passed three minor amendments of its own, but with proposals to ensure that judges consider the rule of law and fundamental justice criticized as establishing a barrier to keeping Canadians safe, and creating a community outreach and counter-radicalization coordinator in the Department of Public Safety described by Conservative MPs as an attempt to build another bureaucracy, the government left little doubt that it regards criticism of the bill as a threat to the fight against terrorism.

Indeed, a review of the hundreds of pages of committee hearing transcripts reveals the remarkable effort to sideline concerns with legislation that permits widespread sharing of personal information without effective oversight and establishes new warrants that purport to permit judges to violate the Charter of Rights and Freedoms.

The committee heard from 49 external witnesses over the course of 16 hours. During that time, Conservative MPs asked only 25 questions about specific provisions in the bill. In fact, critics of the bill were largely ignored, receiving a total of three questions on Bill C-51 provisions.

The Canadian Bar Association, which represents thousands of lawyers across the country, was not questioned at all by Conservative MPs, who instead engaged in a discussion with a representative from the American Forum for Islamic Democracy. The representative did not even discuss Bill C-51 during his open statement to the committee.

Even more striking were the omissions from the committee hearings. Twelve Canadian privacy commissioners -- privacy commissioner of Canada Daniel Therrien and his provincial counterparts -- wrote public letters urging the government to amend the bill by adding better privacy safeguards. Not only was their advice ignored, but Therrien was blocked from even appearing before the committee.

Those that did appear and faced questions from Conservative MPs were often subjected to criticism about their true intentions. MP Diane Ablonczy asked one witness whether their organization was committed to fighting terrorism; MP Rick Norlock asked another whether they opposed taking terrorists off the streets; and MP LeVar Payne regularly dismissed concerns about the bill targeting protestors by arguing that the RCMP and CSIS were simply too busy to concern themselves with such issues.

There were no similar questions for supporters of the bill, even though a cursory review of the organizations raised troubling questions. For example, the Center for Security Policy was founded by a leading voice in the Obama birther movement who has expressed concern with the "increasingly obvious and worrying pattern of official U.S. submission to Islam." Several other Canadian groups were focused primarily on curtailing immigration, including the Center for Immigration Policy, which no longer has a functioning website.

Yet despite the good faith efforts to improve an important piece of legislation, the government treated the committee process as theatre, leading one commentator to lament that Canada now has "a fake legislature designed to fool the tourists and visiting dignitaries."

The oddest aspect of the obvious effort to undermine the committee review process is how unnecessary it is. With a majority government, the Conservatives have the votes to pass whatever legislation they see fit. An open, inclusive review process might have inspired greater confidence in the bill. Instead, it has been subjected to increasing ridicule as demands for a more comprehensive examination of the legislation mount.