Mr. Nuttall Goes to Ottawa (Thanks to You)

Allow us to proudly introduce Jeremy Nuttall, the ace reporter who is now... your ace reporter in the nation's capital. 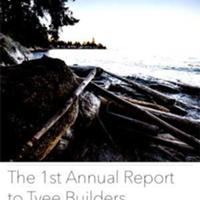 Mr. Nuttall goes to Ottawa thanks to all you Tyee readers who became Tyee Builders, pledging monthly donations to pay his way.

We asked for that support as part of our Tyee Goes National drive at the end of last year, and we were overwhelmed by the response -- more than $100,000 raised in just three weeks.

Those resources create a job for Jeremy Nuttall -- living wages and expenses -- which is a hopeful development given that the nation's largest news chain Postmedia has eliminated its parliamentary bureau, the CBC is rocked by cuts, and most other media orgs are downsizing. Hopeful, too, because Jeremy will arrive in Ottawa with a stellar resume that includes freelance reporting from China and positions with the CBC, the Canadian Press and 24Hours Vancouver, as well as the dozens of stories he filed for The Tyee in his groundbreaking investigation of the federal Temporary Foreign Workers Program (see his bio and all his stories for The Tyee to date here).

Even more hopeful because Jeremy brings to Parliament Hill a mandate from you Tyee readers. It's to cover what the rest of the media either lacks the guts or resources to investigate. He has the experience and skills to lay bare complex international business deals, cover labour issues in-depth, cut through politicians' smokescreens, and represent a British Columbian point of view in the nation's capital.

Mr. Nuttall began going to Ottawa yesterday, when he and his partner Mao Yanhong loaded up their car and set forth toward their new home. Along their eastward route this week Jeremy will be chatting with ordinary Canadians and filing dispatches from the road.

If you want in on that conversation -- or just want to wish Jeremy well or give him your priorities for reporting on the national scene, send an email to editor@thetyee.ca with "For Jeremy" in the subject line and we'll forward it on to him.

Then expect to see Jeremy's reports in our pages as soon as he sets up shop on the Hill. Stay tuned, as well, for an opportunity to sign up to a new Tyee National E-Headlines delivered to your inbox for free. It will be a way for our readers with a national focus to get what Jeremy Nuttall, Andrew Nikiforuk and more top journalists including The Tyee's National Pool of analysts, dig up.

In the meantime, we caught Jeremy for a send-off chat between packing:

You're cool with moving from British Columbia to Ottawa?

"Being raised in Port Moody I was lucky enough to be near the Pacific and surrounded by gigantic trees, bears and other animals while still being in a major metropolitan region. So, Vancouver and British Columbia is a place I love and feel needs a media voice in Ottawa. The city has been a little kingdom plopped on the outskirts of Canada for a long time. But times are changing, I think the province has a much bigger role nationally than ever before and a national bureau for a reader-funded B.C. publication is a logical step in bringing Ottawa and the province together for a conversation."

You first wrote for The Tyee in 2005. Your piece was prescient, focusing on the rocky safety record of a B.C. pipeline operator. How did you find us and what were you doing at the time?

"I first heard about The Tyee from my friend Wolf Depner. I was working as the afternoon news anchor and reporter at Giant FM in Penticton and was looking for a place to pitch a long piece about Kinder Morgan, which was poised to purchase Terasen's pipelines in the province. I had trouble finding a publication willing to run it and Wolf, a reporter at the Penticton Western at the time, asked, "Why not try The Tyee?" I had not heard of the website before and after checking it out online pitched the story and it was accepted. Nine years later The Tyee is still going strong and I see endless possibility."

You spent time reporting in China. Tell us a little about that. What did you learn there that will help you keep power accountable in Ottawa?

"After three years at CBC Radio and approaching my 30th birthday I had a sudden panic attack about having never lived abroad and fired off resumes to a few places. China Radio International hired me to host a lifestyle afternoon radio show. I was hesitant at first due to the concerns about working for state media in China, but decided it could be interesting to go behind the curtain. It offered me a chance to learn a new language, see another country and learn how the Chinese government works and handles information.

"After spending some time there I began to notice how similar some of their techniques were to those used by governments in Canada. For example; the pre-vetting of questions and shroud of secrecy becoming more common in Ottawa. While I do have some good sources and knowledge of China that should prove valuable, I think mostly my having seen the end game of what I believe Ottawa is turning into can help me show Canadians what is happening and what is at stake."

What kinds of stories can Tyee readers expect you to pursue that you think aren't getting enough attention from media now?

"I certainly don't think the meddling of foreign business and money in Canadian affairs is getting enough attention. Lack of such coverage is a big problem in British Columbia and extends to the federal level as well. I've asked federal and provincial officials numerous times about the responsibility to investigate who is investing in Canada and if they are trustworthy or not and always seem to get the brush off. That, I think, is troublesome. Government bullying of its own citizens will also be an area of attention as well as international affairs, labour and trade."

Tell us a few other fun facts about your work experience that might surprise Tyee readers, and will help you report on their behalf in the nation's power centre.

"I've actually lived all across Canada. New Brunswick, Quebec, Ontario, Alberta and B.C. have all been my home at one time or another since fleeing the nest. I think it gives me a solid understanding of the nation's regions and people that will be a strength for covering Canada."

There's a lot of moaning and groaning about the state of the news media today. But you are, after all, headed off to Ottawa because The Tyee's reader Builders dug deep and are paying your way. What does that say to you?

"It says that I have a greater responsibility than I have ever had in my career to work for the readership. People obviously want something different in news. They aren't so concerned with stabbings, government-fed marmalade and call-in shows where retired people yell about unions anymore. They want something that addresses the issues they see as important. Knowing I have so many people behind me makes me both nervous and confident. I will be doing my utmost so I don't let them down."

To learn more about how to become a Tyee Builder to support Jeremy Nuttall's work in Ottawa and expand Tyee investigative and solutions reporting in B.C. and nationally, click here. (By the way, here is the first annual report to the Tyee Builders issued last fall.)