I've never been impressed with the convoluted definitions of what makes a journalist. I think it's pretty simple: someone who collects and presents information to you and me. I'd only make one proviso: the journalist needs to experience something on our behalf, to act as a kind of proxy for us, in doing something that we can’t (or choose not to) do -- climb a mountain, confront a prime minister, eat a live insect, join an army unit at war -- and then tell us, or show us, what it was like and broaden our sense of the world and how it works. 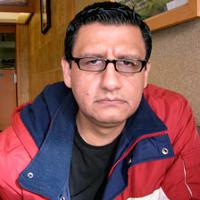 Journalism, thus, is an experiential thing: you experience and you tell. You can argue that this definition is overly democratic, that it degrades and dilutes "professionalism," that it makes us all journalists and, in so doing, renders an entire profession superfluous. That may be so, but as a consumer of news, I am still free to make a choice between "good" and "bad" journalism as I see it, to separate the wheat from the chaff, to read some people and ignore others. The gatekeepers are dead. I am my own filter.

All this is a long-winded way of presenting the story of Beverley Giesbrecht, a dead Canadian journalist whom most of us have probably not heard about. We don"t know her, I suspect, because the people who decide such things have decided that she was NOT a credentialed journalist (or a marginal one at best), that she did something reckless, that she was probably crazy to begin with, and that, as a result, she doesn't deserve our compassion.

Giesbrecht spent two years as a hostage of the Taliban. In that time, she suffered illness, and torture, and she begged for her life in two videos that you can find on YouTube. The videos are painful to watch, especially for those who knew her as a tough-minded, outspoken and resolute British Columbia businesswoman. Her time with the Taliban had reduced her to a shrunken emotional wreck, toothless, her voice breaking, clearly terrified that she might be beheaded at any moment.

A few months ago, it was reported in an Indian newspaper that she had died of a "prolonged illness." No source was quoted, but the people who care about Giesbrecht in Canada accept the fact that she is almost certainly dead because no one has heard a word from her or her captors since September 2009. The silence is ominous because of geography -- she was being held in one of the most dangerous places on earth -- and because of the flurry of communication that preceded it.

Indifference and other lethal factors

Clearly, she died of the Taliban. But in a way, our indifference and our skepticism may have contributed to her death. Giesbrecht never got the media attention of CBC's Mellissa Fung, who was a Taliban hostage for four weeks, or of Amanda Lindhout, a captive of Somali insurgents for 15 months. The Canadian government's deal to secure Fung's release is still shrouded in mystery, and Lindhout's freedom was secured with private donations.

The Pakistan government did little or nothing to get Giesbrecht out of the clutches of the Taliban, according to journalists I spoke to in Peshawar, because she was seen as a Taliban sympathizer. "She's only a blogger," was the contemptuous comment of one Pakistani journalist. Pakistan's deputy high commissioner in Canada, Mohammed Salim, told me recently: "Nobody seems very interested in this case."

Reporters without Borders issued a belated appeal on Giesbrecht's behalf, but an official of the Paris-based organization told me that she was a "propagandist" and not a journalist. The propaganda tag came because of a website, called Jihad Unspun, that Giesbrecht had mounted for several years. She had also converted to Islam, and adopted a Muslim name -- Khadija Abdul Qahaar.  As a result, it seems, she became our version of Hanoi Jane, and didn't warrant the level of attention that Reporters without Borders usually lavishes on missing journalists.

In the Canadian media, the response to Giesbrecht's ordeal was mostly benign neglect. There have been few headlines, and no rousing editorials (or at least none that I've been able to find.) Some of this taciturnity may be benevolent: the less said about her kidnapping, the less her value to her captors, and the greater the likelihood that she would be released. Maybe the media, like Canada's foreign affairs department, is waiting for confirmation of her death before saying anything.

Maybe. Maybe not. Or maybe we just don't care.

Because more than two months have passed since the reports of her death (reports confirmed by journalists in Peshawar) and still her story has found little newspaper space or air time. Maybe the people who make editorial decisions have been googling her name. In the blogosphere, Giesbrecht is widely portrayed as a bit of a nutcase, a woman who sold her soul to the Taliban, a fake journalist who walked into the lion's den of Islamic insurgency and was devoured. "She made her Muslimah bed," goes one chatroom entry, "let her lie in it."

Some of the attacks are grossly mean-spirited. Terry Glavin, an author, journalist (who contributes to The Tyee), and creative writing professor at the University of British Columbia, describes her in his blog as "pathetic," a "nutter," a "recovering alcoholic" (she recovered in the 1990s), "sordid" and suggests she's a "fraud and a lunatic". He even repeats a suggestion that her website (no longer online) may have been a CIA front. When I challenged him on this contention, as a bit of gossip that could have endangered Giesbrecht if her Taliban captors saw it, Glavin said "it was a matter of wide speculation, especially in pseudo-Islamist circles."

He repeats the mantra of other bloggers, that Giesbrecht's journalism was "batshit crazy play-acting."

Journalists who have worked with Giesbrecht in the field say otherwise. Phil Rees is a British documentary maker who worked for months with her in Pakistan and in the Middle East. He says she was volatile and opinionated and confrontational, but otherwise "very professional" and effective in winning the confidence of Islamic insurgents. "She was basically who she claims she was, trying to do journalism and trying to give voice to people who she felt were not getting equal say in the swing of things. . . She wanted to make films."

Giesbrecht never defined herself as such but she was, in a sense, a practitioner of immersion journalism—sometimes defined as reporting from an intensive personal perspective. As author/journalist Norah Vincent puts it in her book Voluntary Madness: "The whole point is that you are not objective."

As for her controversial website, friends say it was not propaganda, but rather a tool to gain the confidence of the people she wanted to interview. "If you put up a website that looks like another CNN wannabe," says one close friend in Canada, Glen Cooper, "they're not going to pay much attention to you."

Giesbrecht herself said of her website: "It is my hope that this will inspire others to Islam and to take a stand against this shameful war on 'terrorism.' I am not a 'terrorist,' a fanatic or mentally unbalanced. On the contrary, I am a level-headed, capable woman, a humanitarian and a contributing member of society."

Both Channel 4 in the U.K. and the Al-Jazeera network used footage she shot, and interviews she secured. In fact, she was pursuing a story for Channel 4 when she was kidnapped in November 2008. She was almost broke, desperate for a scoop. An eerily-prophetic email she sent to Channel 4's news desk talked of a "death-defying journey into Pakistan's tribal areas." The news desk sent her a reply, saying they would like a "taster" -- a sample of the story she was hoping to do.

A few days later, Giesbrecht herself became the story, and in a profound irony, she became its victim. We, the people she was working for, were not able to save her. The least we can do is find a compassionate way to mourn her. Because her story, her immersive experience, has taught us something poignant and illuminating about a war in a faraway land.