Two years after fleeing from Mexico -- a journalist marked for death -- Luis Horacio Najera still can't decide whether his running away was an act of courage or cowardice. 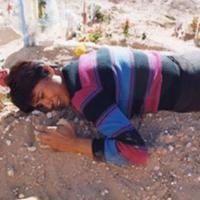 "Others are doing the work that I was doing," he says. And they're still alive, doing what he did for 18 years: writing stories on the drug cartel wars, police corruption, illegal immigration, and gun-running across the U.S.-Mexico border, and making his name as a top beat reporter for Grupo Reforma, the country's most influential publishing house.

Maybe, he thinks, if he'd stayed in Ciudad Juarez, he could have played a part in ending the almost daily bloodshed in one of the most dangerous places in the Western Hemisphere. Instead, Luis Najera, ex-journalist, is sitting in a Tim Horton's in Surrey, B.C., his feet soaked by the rain, wondering how he'll make next month's rent and feed his wife and three kids.

"Ah, well, that's a refugee's life," he says, trying to sound stoic, trying not to show the pain of having to work three days a week as a janitor, cleaning office floors and toilets, and squandering his journalistic skills. Trading his laptop in Mexico for a mop in Canada took some courage, he tells himself. But you can sense the interior machismo struggle.

Luis is 40 years old. Two years ago, in the prime of his life, and of his career, he was told by a reliable source in Chihuahua province that his name was on an assassination list.

"I was investigating human rights abuses by the military and an official told me 'Luis, you have to be very careful. You upset some people. And these people can do whatever they want.'"

His senses sharpened, he noticed that he was being followed. Then his wife told him that she's been trailed by two men in a minivan, and one of then had formed his fist into the shape of a gun and aimed it at her, and said 'Bang.'

Some would say this kind of thing goes with the territory of working as a journalist in the border towns of Mexico. So you exercise caution, and a little self-censorship, and try not to unduly upset the cartels and the cops and the local politicians. Also, you ask your editor to remove your byline. But if you're an investigative reporter like Luis, with zeal and integrity and a nose for the big story, you walk a very fine line.

Since 2006, 34 journalists and media workers have been assassinated in Mexico. In Chihuahua province alone, where Luis plied his trade, the death toll was more than a half dozen. And it isn't just the hit men of the drug cartels you have to worry about; the police and the federales also operate on the dark side. Corruption is rife.

And Luis was a bit reckless. In August 2008, he wrote a story about a massacre at a Ciudad Juarez drug rehab centre. "I wrote that these places were hideouts for gangsters. I knew why the massacre happened. The military and the state police were involved. That's when the military and the gangs converged against me. I was caught between two fires."

Media organizations in Mexico do little or nothing to safeguard their employees, Luis says. In fact, reporters are all required to sign waivers that relieve their newspapers of any liability if they are injured or killed. For specialists like Luis, who work the crime beat, that's a heavy psychological burden.

As he would later write: "I could not trust the government, and I could not simply let myself be killed under some lonely streetlight." So a month later, Luis, his wife and their three children slipped across the border carrying three suitcases and came to Canada. They applied for refugee status.

Starting over in British Columbia

Shortly after arriving here, he picked up a newspaper and was shocked to read the obituary of a fellow journalist whose name was also apparently on the death list: Armando Rodriguez Carreon, gunned down in the driveway of his home.

Today, Luis and his family live in a small rented home in North Delta. After more than a year without a job, he found work as a janitor. It pays $900 a month. The rent is $1100. They survive with the help of friends and the Mormon Church, where they worship. Some of their clothes and furniture "came right out of the garbage."

On Saturday, Luis was in Toronto to be recognized as one of the 2010 International Press Freedom Award winners. He hopes the exposure will help him find a better job, something in the academic world maybe. "I could do research in public safety, or intelligence." Meanwhile, he's studying English to improve his employability.

In his heart, though, he misses life at the sharp end. "If someone asked me to travel to Afghanistan, to take photographs, I would go," he says. "I would go to Colombia. I know a lot about the drug trade... Of course I miss my job. You don't get the adrenalin rush here that you get in Mexico."

Luis knows that, adrenalin rush or not, he's lucky to be here. Fewer than 10 per cent of Mexicans who apply for refugee status in Canada are accepted. It is, after all, a democracy with stable institutions. If you feel threatened in one province, you can move to another where it's safer. And despite the occasional eruptions of drug cartel violence in the north, Mexico is still seen as a cheap and safe vacation spot for Canadians.

Fighting a paper war to stay

But one man's paradise is another man's purgatory. Luis spent 18 months preparing his case for the Refugee Board, and he didn't leave anything to chance. He had letters of support from Reporters without Borders, the Committee to Protect Journalists, Canadian Journalists for Free Expression, Article 19 from the UK, and even a publishing group in Germany. They all vouched for the fact that he was likely a marked man if he remained in Mexico.

"The smartest choice we made in Canada," says Luis, "was to buy a printer from Futureshop. My file was more than 900 pages of evidence."

In that file, he covered his years of work as an investigative journalist in Ciudad Juarez, West Texas and New Mexico. He told of how he was threatened with death many times, how he was followed and harassed and intimidated.

The most chilling incident of all involved a fellow journalist, Enrique Perea Quintanilla, in Aug. 2006. Perea lived in another city, and the two men texted regularly, exchanging information about the stories they were following. One day, Luis sent a text message to Perea, and a few minutes later, he received an innocuous message in reply. What Luis didn't know then, was that Perea had been abducted by a gang, and that the gangsters were intercepting his text messages, and replying to them. Perea was killed shortly after. A source later told him that the killers were trying to make Luis a "scapegoat" for the killing, on the basis of the text messages they were exchanging.

The refugee board hearing in downtown Vancouver this past summer started at 9 a.m. and lasted barely an hour. By 11:30, Luis had a decision: His application was accepted.

Today, Luis still has all the instincts and mannerisms of a photojournalist. The first time he visited the Downtown Eastside, he noted the brisk drug trade, and he overheard whispered conversations in Spanish. It confirmed what he suspected: the Mexican drug gangs have their tentacles in the Lower Mainland.

In the inside pocket of his ski jacket, Luis always carries a small digital Canon camera. He photographs everything. He's especially proud of his 19-year-old son who marched on a recent Remembrance Day parade as a member of the Boy Scouts. He shows me a dozen snapshots. He was thrilled when he heard his first bagpipes.

"When I die, I want my grandsons and my great-grandsons to know why they are born in Canada, and how they came to be here," he says. "I want that to be my legacy."

Does he feel secure now in Canada?

Luis thinks a minute and then replies in his unpolished English: "It may sound paranoid, but I know that for drug dealers, revenge is a plate you can enjoy cold."

But he's overcome his fear enough to contribute to a Facebook page with a title that translates as "Journalists, don't shut up!" It encourages Spanish-speaking reporters to publicize and denounce threats against them in the course of their work.

It's a shout of defiance from a journalist on the run. A small act of courage.